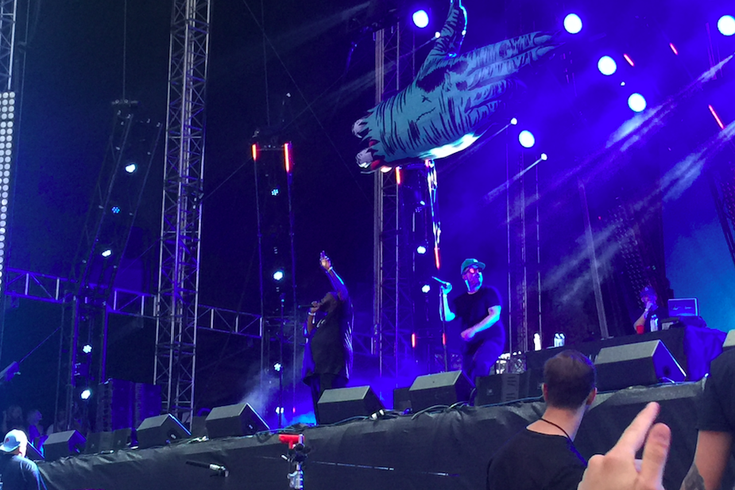 Run the Jewels, a rap duet comprised of Killer Mike and El-P, perform at the Made in America festival in 2017. They're headlining the Goose Island 215 Block Party on Saturday, Sept. 7, 2019.

Killer Mike and El-P, aka the rap duo Run the Jewels, will return to Philadelphia on Saturday to headline Goose Island Beer Co.’s 215 Block Party at Franklin Music Hall, which is the arena formerly known as the Electric Factory.

Also on the bill is Chevy Metal, the self-described “70s dirt-rock cover band (which) plays deep cuts off albums by Sabbath, Van Halen, Queen and the Stones.” (They’re fronted by Foo Fighters drummer Taylor Hawkins, and branch out beyond just the 70s.)

Should be a good time, and not only because “Love Again,” the American Wheat Beer collaboration between Goose Island and RTJ will be available for swilling. Besides that, the music should be very good, too!

Admittedly, I’ve never seen Chevy Metal live before, but judging by clips of their previous shows, they cover a lot of great tracks from yesteryear.

So great, in fact, that we’ve put together a Spotify playlist to get you ready for the show if you’re going, and to get a sense of what you’re missing if you aren’t. (Here's hoping Mike and El include a little something from their yet-released album RTJ 4.)

Included are songs from Run the Jewels and those covered at previous shows by Chevy Metal, who we couldn’t find on Spotify.

With no further ado, here’s the playlist, accompanied by the clear warning that RTJ tracks tend to include profanity: