Demonstrators at the 12th and Market streets location say they have faced retaliation for unionizing. They want their manager fired 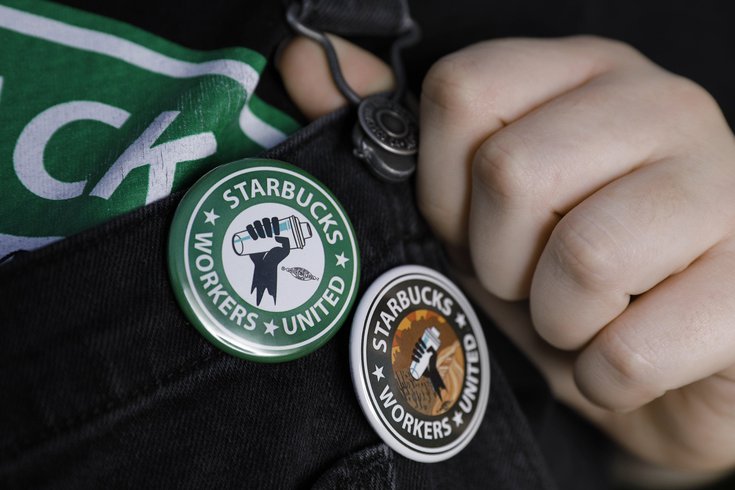 Starbucks workers at the 12th and Market streets location in Philadelphia began a 24-hour strike Friday morning. They say they have faced retaliation for unionizing and are demanding the store manager be fired.

Starbucks workers at the coffeeshop on 12th and Market streets in Center City began a 24-hour strike Friday morning.

Fourteen of the store's 18 workers are on strike. The demonstrators asked the other four to keep the store closed.

​​"Starbucks prides itself on being a progressive company and yet they're withholding benefits and wages from hundreds and hundreds of employees that they call partners," store supervisor Kate Pfligler told 6ABC.

12th & Walnut Starbucks is ON STRIKE!! #Philly we need you on the picket line in front of the store bw 6am-2pm today!!!

When workers rights are under attack, what do we do?? STAND UP FIGHT BACK 🪧🪧🪧

"Starbucks has great partners and we value their contributions," the company said in a statement. "We respect our partners' right to engage in any legally protected activity or protest without retaliation. We are grateful for each partner who continues to work and we always do our best to listen to the concerns of all our partners."

The Starbucks Workers United union and the Philadelphia Joint Board of Workers United also did not immediately respond to requests for more details on the union's demands for the 12th and Market store.

The strike is part of a wave of demonstrations hitting unionized Starbucks locations across the country, Vice reported. It's meant to bring attention to poor working conditions and the company's hostility toward unionization efforts at its stores.

Last week, there were demonstrators in front of three Starbucks locations in Pittsburgh after the chain fired two unionized workers. The protesters and Starbucks Workers United claimed their terminations were retaliation for union activity.

There were similar protests in Atlanta, Boston, Detroit and Seattle.

Earlier this month, Starbucks announced it would close 16 stores across the country due to worker safety concerns, including the store at 10th and Chestnut streets in Philadelphia.

Starbucks Workers United filed a complaint about the move. Some of the stores that are closing are unionized, but the one in Philadelphia is not.

In a letter to employees, Starbucks said the "rising drug use" and "growing mental health crisis" seen in Philadelphia and other U.S. cities was the reason for the closures.

In a video of an internal Starbucks meeting leaked on Twitter, CEO Howard Schultz said more closures are likely.

EXCLUSIVE: Today at an internal meeting CEO Howard Schultz said: "Starbucks is a window into America... we are facing things in which the stores were not built for... we're listening to our people and closing stores, & this is just the beginning. There are gonna be many more. 🧵 pic.twitter.com/E9ayQqSmB8

"We are beginning to close stores that are not unprofitable," he said.

"Starbucks is a window into America. We have stores in every community and we are facing things in which the stores were not built for. We're listening to our people and we're closing stores and this is just the beginning. There are going to be many more."