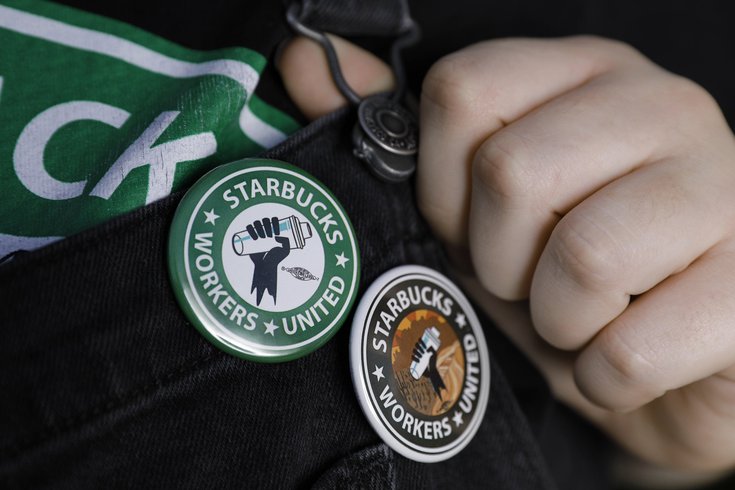 More than 130 Starbucks stores in the U.S. have unionized in recent months. The company announced plans this week to close 16 stores by the end of the month, including one in Philadelphia. Starbucks Workers United filed a labor complaint alleging the company's actions are union-busting retaliation.

A group of workers from the union organizing Starbucks employees at stores around the country has filed a labor complaint over the company's decision to shutter 16 of its cafes, including the Philadelphia location at 10th and Chestnut streets.

Starbucks Workers United (SBWU), which has led the push to unionize more than 130 U.S. stores in recent months, filed an unfair labor practice charge with the National Labor Relations Board, In These Times reported. The Seattle workers who filed the claim said that the company's move to shutter the 16 stores is a form of union-busting and retaliation.

Starbucks revealed this week that it would close stores in Seattle, Los Angeles, Portland, Philadelphia and Washington, D.C.

"If Starbucks truly cared about its partners’ safety it would bargain about ways to ensure their protection, not displace workers by closing stores," SBWU legal counsel Marina Multhaup told In These Times.

Workers at one of the unionized stores in Seattle, which is on the list of those closing at the end of July, posted a notice on the door of the business calling the company's actions "disingenuous."

In case you were wondering what Starbucks employees at 505 Union Station think of the safety concerns from their (possibly ex-)employer. pic.twitter.com/WVLIdUPiQl

The unionization push among Starbucks workers has been driven, in part, by a desire to negotiate solutions to the kinds of safety concerns that have caused problems for employees at some locations. In the letter to employees on Tuesday, Starbucks U.S. operations heads Debbie Stroud and Denise Nelson indicated that the company would allow managers the ability to limit seating, reduce operations and close restrooms in response to safety concerns.

That last point is a reversal from the company's policy adopted in 2018, after an incident at the Starbucks at 18th and Walnut streets in Philadelphia. Two Black men were arrested at the store while waiting for a friend to arrive for a business meeting. One of the men had asked to use the store's restroom, but was denied by the manager because he had not purchased anything.

The incident, which garnered national attention, prompted Starbucks to issue a public apology and a pledge to allow more access to restrooms.

In Philadelphia, workers at four Starbucks locations voted to unionize in May. The Center City store slated for closure is not one of the unionized stores in the city.

Josie Serrano, a Los Angeles SBWU organizer and barista, told In These Times that the company's welcoming policies at its stores have led to incidents that unionized employees wanted to address with management to find solutions, including the possibility of adding security.

“So if we were able to have a fair shot at bargaining with the company over our safety concerns, we wouldn’t need to close the store because we would be able to add more security to these stores," Serrano said.

The labor complaint filed by SBWU seeks injunctive relief for the workers at the 16 affected Starbucks stores, which would speed up a court order as the case is litigated in the months ahead. A similar process is playing out in New York, where a complaint seeks injunctive relief for workers at two unionized, Buffalo area stores where employees alleged management committed labor violations.

“We’re empowering local leaders, who have emphasized repeatedly that they care deeply about creating a safe and welcoming environment in the community," the spokesperson said. "The company is renewing its commitment to safety, kindness, and welcoming in our stores.”