Riders could see the bi-level coach cars in service next year — that is, if the riders actually return 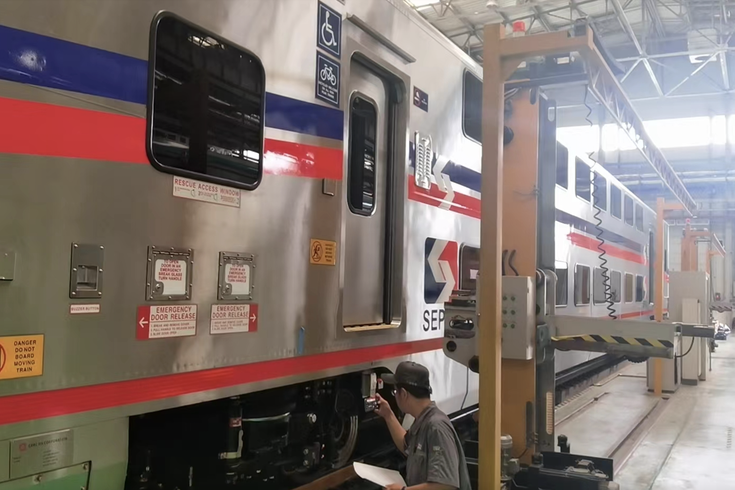 SEPTA's 45 double-decker Regional Rail trains are being manufactured in China as part of a $138 million contract awarded in 2017. The initiative was stalled by the pandemic, but the first trains could enter service in 2023. A pilot train is pictured above.

As SEPTA works to surmount major declines in ridership during the COVID-19 pandemic, the authority remains committed to completing many of the initiatives it developed in the period before the public health crisis drastically changed the region's commuter outlook.

SEPTA's plan to bring double-decker coach cars to the Regional Rail system is still a priority, spokesperson Andrew Busch said Thursday. Despite pandemic-related delays to the manufacturing process in China, a timeline is now taking shape to get the first cars shipped to the United States and delivered to SEPTA next year.

In 2017, when Regional Rail ridership was growing, SEPTA awarded a $138 million contract for 45 bi-level coach cars to be produced by CRRC MA, the U.S. subsidiary of a state-owned Chinese company that has a growing presence in the United States. Boston's T subway system and the Los Angeles Metro both have awarded hefty contracts for hundreds of trains from the company, which now has a pair of manufacturing facilities in Massachusetts and Illinois.

SEPTA's new bi-level trains were supposed to be rolled out on Regional Rail lines in late 2019 and 2020, but the COVID lockdowns and regulatory environment in China slowed progress at CRRC's facility in Tangshan, where the trains are first assembled before shipment to the company's site in Massachusetts.

When the pandemic hit, SEPTA was suddenly confronted with the realities of plunging ridership and a new dependence on federal funding, which will only help carry the system's recovery through 2024.

"Things are certainly different than they were when these coach cars were ordered," Busch said. "However, we still think this was a good investment then and it's going to be great for SEPTA and customers moving forward."

Regional Rail ridership, though showing signs of a rebound, is still only at 49% of SEPTA's pre-pandemic baseline.

The Regional Rail system averaged 55,791 passenger rides per day in June, the best numbers posted since the steep pandemic drop-off. For comparison, ridership on Regional Rail had fallen to 8% of the pre-pandemic baseline in June 2020 and had only gotten back up to 46% by June 2021, before sinking yet again during the Delta variant wave.

Excitement about the double-decker trains resurfaced last weekend after Chinese news outlet Beijing Youth Daily shared photos from the Tangshan assembly line, including pictures of the SEPTA coach cars in progress and other trains being manufactured there.

Compared to the current SEPTA fleet, the bi-level trains will have seating for 130 passengers instead of 100. Cyclists who use Regional Rail will benefit from the cars being outfitted with bike racks on their lower levels, too.

"These trains have full modern amenities. They're fully accessible," Busch said. "It's an upgrade for our passengers. Obviously, the timeline was pushed back a bit, but we think they're going to be coming at a time when we're in the midst of seeing ridership tick back up."

In contrast to the Silverliners, which have their own engines, the new coach cars are made to be pulled by locomotives. These trains require less routine maintenance and can be refurbished more easily as they develop wear over time. They also are less likely to surface problems during the pilot phase, since they don't have engines of their own to be tested.

SEPTA currently has about 45 existing coach cars pulled by locomotives that it uses on select lines, most of them manufactured by Bombardier several decades ago.

Around the time the CRRC MA contract was awarded for the bi-level trains, SEPTA also ordered 15 new ACS-64 locomotives made by Siemens, anticipating that they would be used for the 45 new double-deckers and the 45 older coach cars on the Regional Rail fleet. Each of SEPTA's 15 locomotives ultimately will be paired with about six coach cars, new and old.

"Having new cars to add to the fleet allows us to take some of the huge burden off these 50-year-old (Silverliner 4) trains, which will help us balance things out better," Busch said.

The first of the new double-decker trains could arrive for SEPTA to begin pilot testing as soon as early next year. Riders may see some of the new fleet in service by late 2023 or early 2024.

"Of the 45 (that we ordered), four will come over as pilot cars that we're going to test," Busch said. "One of those cars is fully complete and another one is at about 80%. Another two are coming along."

The emergence of CRRC in the U.S. has been a source of concern among some U.S. lawmakers, who believe China's strategy of bidding low for transit infrastructure projects, like SEPTA's, puts domestic manufacturers at a competitive disadvantage. The regulations in the U.S. also play a role in compounding the manufacturing delays in China.

Before the new coach cars can be delivered to SEPTA, for instance, they need to be partially disassembled in China and then shipped to the CRRC facility in Springfield, Massachusetts. At the U.S. facility, the steel shells are fabricated in compliance with federal laws covering large mass transit projects, which have minimum requirements for the use of domestic components.

SEPTA expects that its testing phase for the double decker cars will coincide with CRRC MA completing work on the remaining trains in Massachusetts. The hope is that the trains will be ready in time for a sizable group of them to be brought into service together.

"Some time in late 2023, that could be the first time that we get some of them out into service," Busch said. "We think we're on pretty solid footing with this schedule for delivery." 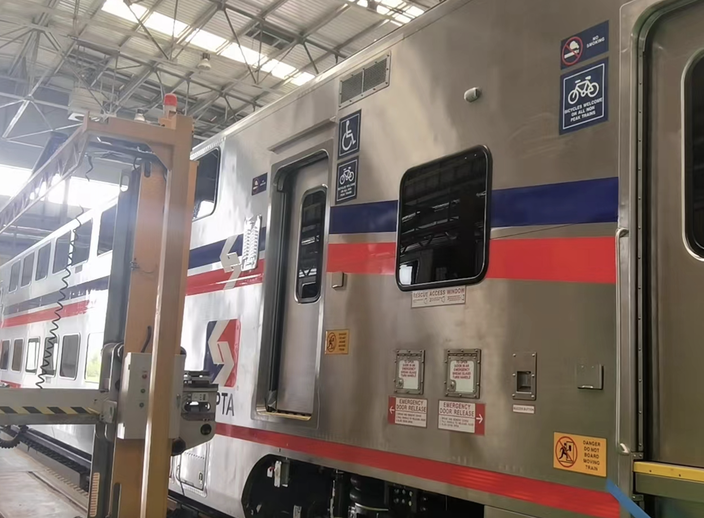 SEPTA shared a photo of one of the bi-level coach cars manufactured in China. It will be sent to CCRC MA in Springfield, Massachusetts before it's delivered to SEPTA for pilot testing.

Assembly in China has already begun on another 20 cars, in addition to those SEPTA will use for the pilot phase. Ideally, the full fleet of 45 will make it through the production line in Massachusetts by October 2024, Busch said.

From a ridership standpoint, SEPTA is encouraged by the fact that numbers have been climbing during the summer months, which historically see fewer riders. An optimistic goal would be for Regional Rail ridership to return to 60% of the pre-pandemic baseline this fall, and then reach closer to 80% by late 2023, Busch said.

"We do think that as the Regional Rail ridership numbers come up, even if that continues to be gradual, we're going to be able to put these new trains into the mix," Busch said. "That will help us accommodate more riders and it gives us some more flexibility in scheduling. We can look at possibly adding more express service."

SEPTA is already undertaking a "Reimagining Regional Rail" initiative that's intended to deliver better, faster and more frequent service across the system. The goal is to broaden the focus of Regional Rail beyond serving nine-to-five workers, making the system more convenient for people traveling for entertainment, errands and appointments. SEPTA is still collecting public feedback on how that overhaul will be implemented.

In the meantime, Busch acknowledged that the pandemic could throw new curveballs SEPTA's way. The region's remote workforce may also remain relatively stable, keeping past riders from returning to Regional Rail in large numbers any time soon. Crime and sanitary concerns that have plagued SEPTA in recent years also continue to be a significant barrier to recovery — and SEPTA is painfully aware.

"We're trying to do everything we can to make sure that when more people do come back, they're going to see that it's safe, that it's clean," Busch said. "We know we have to battle both the reality of what's going on in parts of the system and the perception. If somebody doesn't feel safe, we know that they're going to be unlikely to ride."

Double-decker regional rail trains won't solve SEPTA's woes, but they are a bright spot on the horizon of a mass transit landscape that has looked bleak and unappealing in the Philadelphia region.

"We're doing a lot of work to try to make sure that people do feel safe, and to try to change that perception," Busch said. "We're addressing some of the very real problems that we have."