Starting on solids: Introducing my 4-month-old baby to food 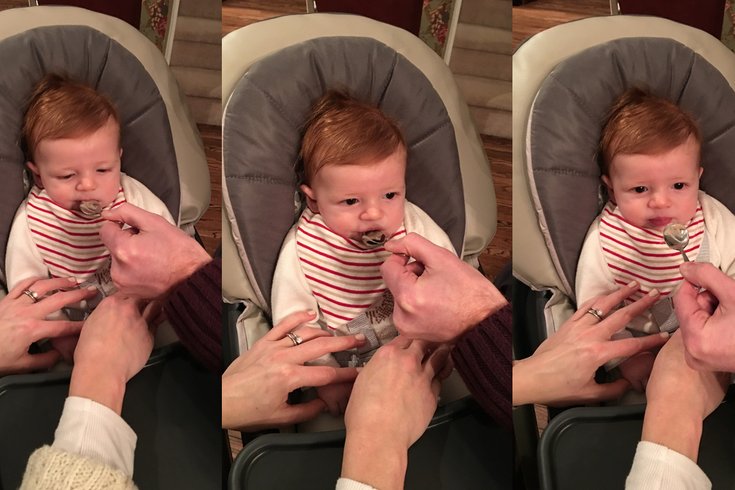 Killian's first time trying food was a sweet, special moment for Katie and her family.

At his two-month checkup, I was told that by 4 months old, Killian would probably be able to start on solid food. Sure enough, last Friday I received the go-ahead from his pediatrician to introduce fruits, vegetables and baby cereal into his diet since my baby boy now weighs more than 15 pounds and strongly holds up his head.

Even though I simply love breastfeeding and do not want my baby to grow up too quickly, I was so excited to feed Killian baby food! I anticipated another series of sweet firsts in his life: wearing a bib, sitting in a high chair and tasting food on a spoon. As soon as we got home from the doctor, I pulled out my baby food maker to puree a banana. My husband and I took turns giving our baby boy little tastes of it. At first, Killian was uncertain, but he quickly got the hang of it. The doctor said not to give him more than an ounce or two in a day. Since it was his first time with food, we fed him about half an ounce so as not to overload his digestive system. I pretended the spoon was an airplane, just as my father used to do with me. My husband coaxed Killian into holding the spoon for himself. It was a special event, just as sweet as I envisioned. My parents and sister were visiting us for the weekend, so Killian had an excited audience for his first bites. Many photos and videos were taken to share with friends and relatives.

Our doctor advised us to only introduce one new food at a time, for two or three days straight, to determine if Killian’s stomach can process it and ensure there are no allergies. Starting off with combo foods like an apple and banana blend would make it more difficult to determine the offending food if there was a problem. I specifically asked our pediatrician about bananas, inquiring if we should avoid any fruits and veggies that usually disagree with my husband and me. She said no; just try one at a time and see what he prefers. Killian may have my stomach when it comes to bananas because about an hour after he tried it, he began wailing. He showed the classic signs of gas and indigestion and did not stop crying until he went to the bathroom. Like so much in life, parenthood is a series of trials and errors despite abundant love and best intentions. I was sick to think that baby’s first food was the cause of his discomfort, but it is all part of the process of introducing solids into his diet. We are going to try baby rice cereal mixed with my breast milk next, which should be gentler on his little tummy. The doctor advised that if he does not take solids well to start, take a break and try again in a few weeks. One thing we know for certain: no more bananas!

I had planned to make baby food months ago and stockpile it in the freezer, but my son has kept me pretty busy, so this was the first time I even pulled the baby food maker out of the cabinet. The Beaba Baby Cook is a really useful appliance, but anyone who wants to make their own baby food could do it with a steamer and a blender or food processor. Our doctor recommends making batches of baby food and freezing individual-size portions in ice cube or baby food trays. Once frozen, they can be popped into larger containers and stored in the freezer. We were told to never microwave the frozen baby food to defrost it; rather we should thaw it in a glass dish over another dish of hot water. Our doctor said baby food can be served warm or at room temperature, whichever our boy prefers. Since I love being in the kitchen, I plan to exclusively make his food. I found some great resources and recipes online to help me in the process. There will probably be a day when Killian has store-bought baby food, like the Gerber baby food I grew up eating, but I love the idea of making it all from scratch for him.

Like all of our pediatrician appointments, I had a long list of questions at Killian’s four-month checkup. One was whether Killian would breastfeed less upon starting solid foods. Our doctor said no: Nursing is still his primary source of nutrients, and he should not receive less milk because he is having baby food. The fruits, vegetables and cereal he is having as Stage 1 solids should be considered something extra, not a replacement for any of my breast milk.

Like all mothers have advised me, time with your precious baby goes by quickly. I am now that mom who keeps saying, “My baby boy is getting so big!” even though he is still an infant. Though I am thrilled that Killian is growing and getting to experience new foods and flavors, his first time in his high chair was a little bittersweet for his Mama. But mostly sweet.

What are your favorite baby food recipes or baby food brands? Share with me in the comments section or Tweet me @ThePhillyVoice and @KathleenEGagnon.