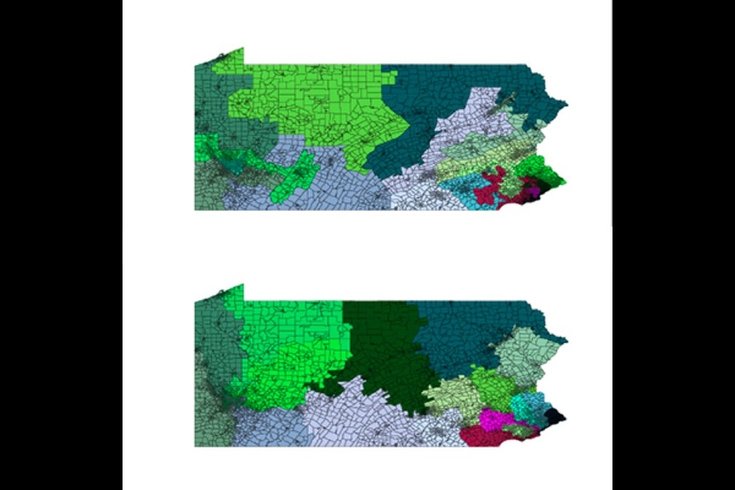 In this picture provided by researchers at the University of Pittsburgh and Carnegie Mellon University, the top map shows Pennsylvania's current congressional district map. The bottom photo shows the district map after applying a Markov chain, which is meant to produce random, incremental alterations.

A group of mathematicians says Pennsylvania's congressional districts are almost certainly the result of gerrymandering.

Researchers at Carnegie Mellon University and the University of Pittsburgh announced they've developed a new theorem on bias in Markov chains, which they used to analyze what a truly unbiased congressional map of the state would look like.

Markov chains, as the researchers explain them, are "algorithms which can generate a random object by starting from a fixed object and evolving in a stepwise fashion, making small random changes at each step."

In the case of Pennsylvania's congressional districts, the researchers used the current district map as a starting point and applied a Markov chain to create "truly random districts," and then compared the two. Those random districts were constrained to make sure they had equal populations, border continuity and a fixed ratio of perimeter to area.

When the researchers ran the Markov chain, the properties of the original map changed "rapidly" with minor alterations. In other words, a process that is supposed to incrementally change the original subject gave it a big facelift.

“There is no way that this map could have been produced by an unbiased process,” Wesley Pegden, an assistant professor of mathematics at Carnegie Mellon and one of the authors of the research, said in a press release.

The researchers noted that their method doesn't provide a tool for producing new congressional districts but does give a "rigorous test to detect that existing maps were created in a biased fashion."

The findings were published Tuesday in the early online edition of the Proceedings of the National Academy of Sciences.