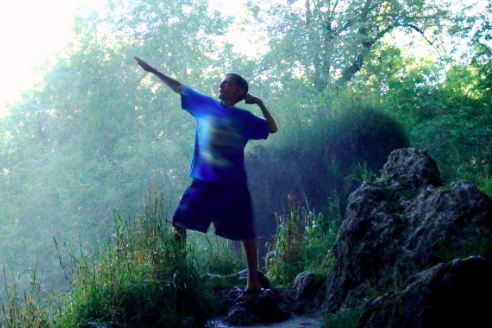 14-year-old Austin Niehus is facing his 53rd surgery, but the success of his online fundraising efforts may jeopardize his health benefits.

A Colorado teen with a rare genetic disease has been so successful with his fundraising efforts that he may be in danger of losing medical benefits, which would force his family to pay out of pocket.

Austin Niehus, 14, was born with Goldenhar Syndrome, a rare disease that causes facial deformities Throughout his life, he has had more than four dozen surgeries to reconstruct his face, gradually restoring his ability to function while also putting his devoted mother under tremendous financial strain.
In an exclusive interview with People, Austin's mother, Kera, explained that her son's effort to help pay for his 53rd surgery in June may actually have been too successful.
Austin published the following video last week to help raise money on a GoFundMe account created for him in April 2014.
In the past week, the account amassed an incredible $280,000, a testament to the growing legitimacy of crowdfunding as strangers show an outpouring of generosity with their wallets.
In this case, however, there may be a insurance problem.

"We may need to pause or stop the gofundme account," Kera Niehus wrote on Austin's page. "Austin is on SSI which is his disability stuff and gets Medicaid through them, with all of your awesome, generous donations, unfortunately he could [lose] these benefits, and that means everything comes out of pocket which could be a huge bummer."

Because Austin has a pre-existing condition, he is unable to get private health insurance. Kera, who alternates working as a home hairdresser, a temp, and a house cleaner to support her family, does not a have medical plan under which Austin can be covered.

While People was unable to get direct comments regarding the technicalities of Austin's case, some clarification was provided by a spokeswoman for the Social Security Administration.

"The Supplemental Security Income (SSI) program pays benefits to disabled adults and children who have limited income and resources," Nicole Tiggeman said in an email. "The law requires Social Security to consider the income and resources of the individual, parents or spouses when deciding an SSI recipient’s initial and continuing eligibility to SSI benefits."

Kera has hired an attorney with the hope that a special needs trust fund can be established for Austin, but is unsure whether this approach will work.

Though the cost of Austin's surgery is not specified, his case raises an important conflict that can occur in cases when crowdfunding is used to help those who need it the most.

For Kera, Austin's video was a lifesaver in its own right. She explains to People that just as she was planning to shut down the GoFundMe account, she received an e-mail from a suicidal teenager who informed her that Austin's story convinced her not to go through with it. The girl's parents later donated $500.

Read the full story from People.