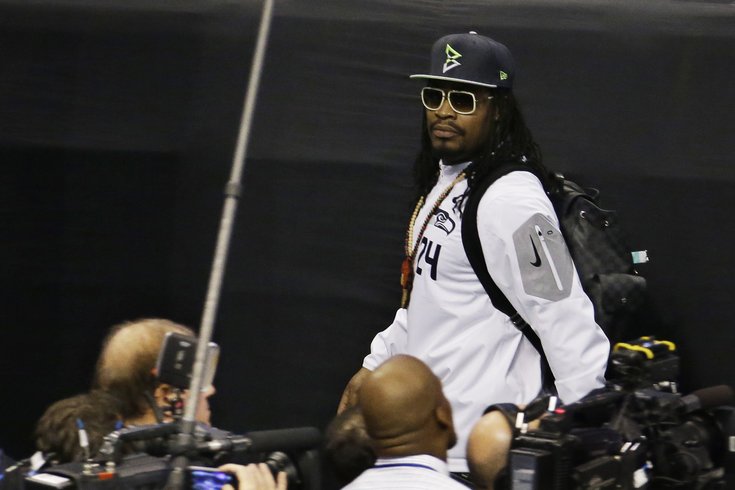 Let's see if this works: I’m writing this so I won’t get fired.

Eh, doesn't really have the same ring to it. Maybe I need to add the sunglasses?

Marshawn Lynch, who first became known to those outside the football world for his rumbling touchdown in the 2011 wildcard game against the Saints or due to his obsession with Skittles, was reportedly threatened with a $500K fine by NFL Commissioner Roger Goodell if he failed to speak with reporters at Tuesday’s Super Bowl Media Day.

Earlier this season, he was fined $100K for failing to speak to the media after a game, and since then, he’s graced the media with his presence when required, although hasn’t seemed interested in actually answering any of their questions.

Today was no different, as Lynch responded 29 times with the same phrase: “I’m here so I won’t get fined.” 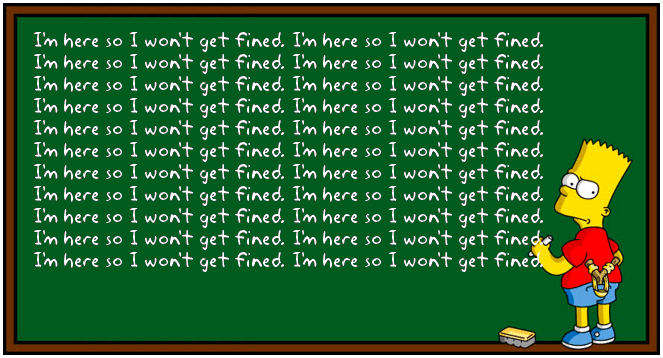 Some find it humorous, almost endearing. Others get annoyed.

Hopefully, #MarshawnLynch is wrong, re: #imheresoiwontgetfined. Another $100k is in order. Also? He left his Skittles. #MediaDay

At least he’s being honest, which is more than you can say about some pro athletes and how they interact with the media.

And Howard Eskin was the one egging on Lynch? Why is he even there? Why is any Philly media there?

Unless I'm mistaken, that was @howardeskin repeatedly asking Marshawn why he won't answer Q's. The universe will now collapse in on itself

Lynch “spoke” for all of five minutes before leaving the microphone. Whether or not Lynch is disciplined - verbally or monetarily - is still to be decided, but it appears as though his presence was enough to avoid being fined.

Word is Lynch won't be fined for today. He was available.

If Lynch refused to speak, his fine would have been tied for the fourth largest in NFL history.

I don’t mind one bit when players act like this, especially when in opposition to someone like Goodell. who will threaten to fine a guy like Lynch half a million dollars for not speaking. If you remember, that’s the same amount Patriots coach Bill Belichick had to pay for literally cheating (Spygate not Deflategate). It’s also what Colts owner Jim Irsay was fined for “violating the league’s personal conduct policy” - not to mention breaking the law - when he was pulled over for DUI and police found thousands of dollars worth of pills in the car.

HOW DARE MARSHAWN LYNCH MAKE A MOCKERY OF THE MEDIA pic.twitter.com/qEzBe1H3TY

The real question is whether or not Lynch will wear those all-gold cleats he was prohibited from wearing in the NFC title game. Or if he scores a touchdown, will he celebrate with what’s become his signature move - and has also resulted in him getting fined?

Must be nice to have that Skittles money.

Obviously, Lynch wasn't the only one who spoke Tuesday, although most of the coverage, even those on other players, revolved around him. Here are some other highlights from the Seahawks session with the media:

Quarterback Russell Wilson was asked what one rule he would change:

Russell Wilson, when asked what one NFL rule he would change: "I wish everybody would stop fining my man Marshawn."

Richard Sherman weighed in on Lynch, and specifically Goodell:

Richard Sherman: "Every one of the NFL's personnel should be obligated to speak weekly." Mentioned Goodell specifically.

And he made this comparison to Lynch with the media:

Love this from Sherman: "Putting Lynch in front of the press is like putting a reporter on field and asking him to tackle Adrian Peterson."

He also said he thinks his wife “has the best booty ever.” Media Day, ladies and gentlemen.

Bennett also compared his beard to those of other "good guys" throughout history, such as Moses, Jesus and ... Ghengis Khan?

"I just love my beard. Moses had one; Genghis Khan had one. Just good guys man. Jesus had one too." - Michael Bennett pic.twitter.com/k8LOFSJZME

The Seahawks had a selfie stick:

And on a more serious note - kind of - coach Pete Carroll weighed in on Lynch:

"[Marshawn] is unique and we've always celebrated the uniqueness of our players in the way that allows them to play at their best. That's what it's designed to do and so to have the same expectations for every single person is to miss it, and so we don't." [via azcentral.com]

Maybe I'm reading too much into that quote, but it seems like a veiled shot at Goodell and the NFL. Carroll's basically saying that the league, by making all the players follow the same protocol, is stripping them of their individual identity, and thus treating them more as objects than as human beings. That would be consistent with the way the NFL has treated player injuries, specifically concussions, over the years.

Okay, enough of that. It's Media Day. We're not really supposed to be talking about football, right?

The Patriots also met with the media on Tuesday, but they weren't nearly as fun as the Seahawks. For the most part, they said about as much as Marshawn Lynch, but used a few more words in doing so.

I think Legarrette Blount - wait, he walked out on the Steelers mid-game this season and is now in a Super Bowl? - well, he summed it up best:

"They like to hear themselves talk. Let 'em talk." -- Legarrette Blount pic.twitter.com/kNmdwf3Kyj

And he's right. I mean, if I were in the Patriots position, knowing full well that a slew of Deflategate questions were coming, I wouldn't much want to talk to the media either.

Then again, Bill Belichick didn't seem interested in answering any of your questions.

This is the face Bill Belichick makes when he’s asked a question about @katyperry #SBMediaDay pic.twitter.com/2gfRuPB0jH

Except for this one, which was asked by the daughter of Pats linebacker Jerod Mayo:

He was also caught rocking flip-flops:

Bill Belichick crushing flip-flops at media day, because of course. (via @TheBuzzerOnFOX) pic.twitter.com/k1HvY8NHFY

Tom Brady, playing in his sixth Super Bowl, is apparently as popular as ever:

A couple of people want to talk to Tom Brady. #SBMediaDay pic.twitter.com/MIk0zYvXoM

Then there was Rob Gronkowski, who read an excerpt  from "A Gronking to Remember," the fan-fiction erotica novel about the Patriots tight end. It's a real thing, and it came out last month. 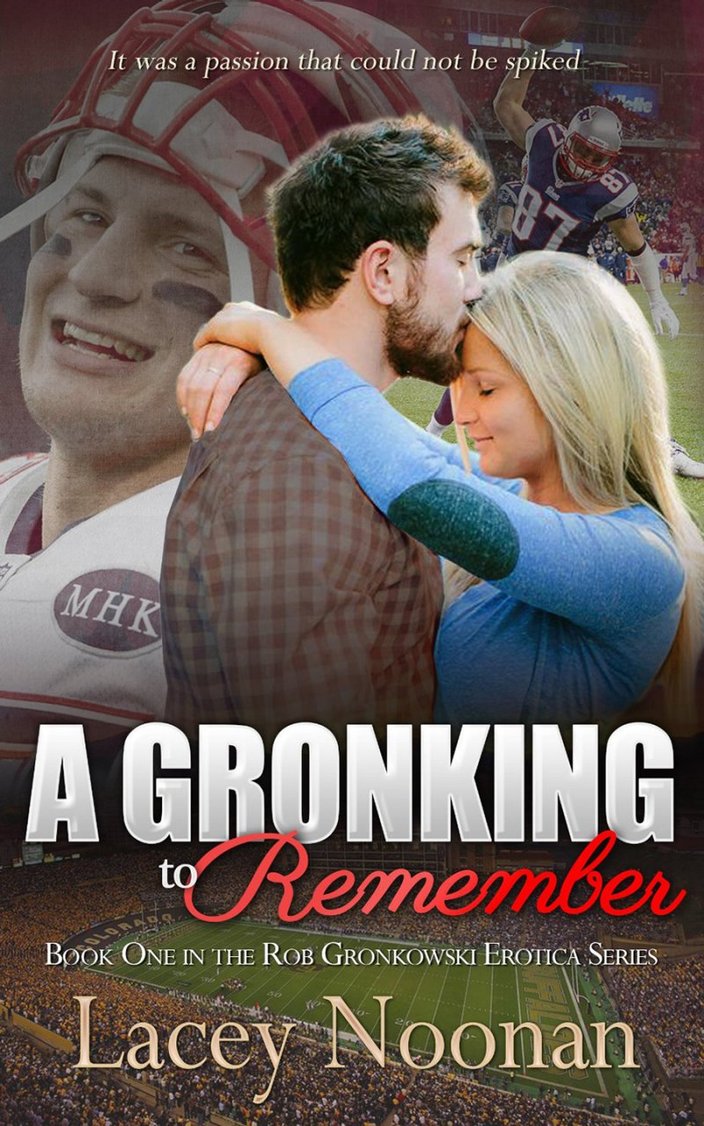 And he was also talked into singing some Katy Perry:

There was this guy drawing caricatures of players as they spoke:

Guy doing a Gronkowski caricature while he's talking, like this is Six Flags. pic.twitter.com/8T2iit8GJf

And whatever this is:

Thank god that's over with. Now back to the serious stuff, like who handled the Patriots' balls and whether or not Brady was able to feel a difference when he gripped them.