Survey: Philly is home to the 8th sexiest accent in America

I mean, we can take a compliment but this seems to be pushing the bounds of aural decency 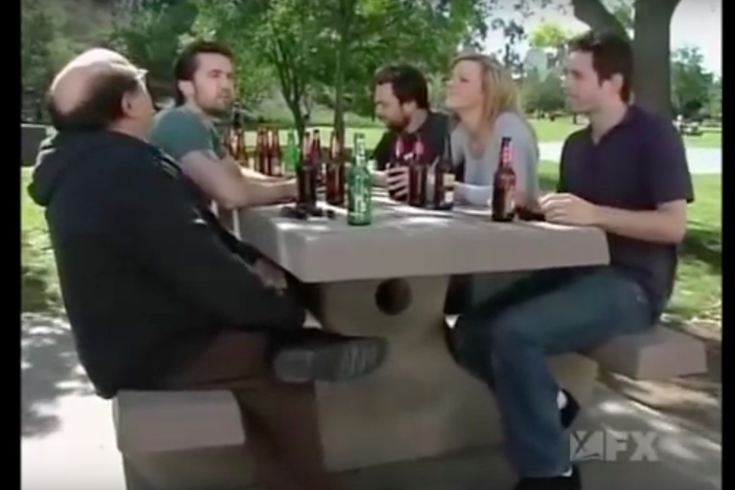 It's Always Sunny in Philadelphia/YouTube

In November, Always Sunny concluded its 14th season, and fans were worried that the gang might not be coming back together for any more episodes. Fans were quieted after McElhenney tweeted last week: "There's room for both you animals." Then the show creator told Deadline Magazine he will keep the episodes coming "forever."

In this industry, we get tons of emails from people suggesting we write this or that story. Most of them do not get written about, but I’d like to tell you about a pitch that managed to elude the “delete email” key on Tuesday morning.

An international media company called “Big 7 Travel,” which “creates original content … for a mobile-first millennial audience,” has released a list of the “Top 50 USA Sexiest Accents.”

In it, respondents declared that “Long Islander” is the least sexy accent from sea to shining sea, and that “Texan” is the most appealing ear candy.

These are the sorts of findings with which most people can agree. After all, people from Strong Island sound like they’re muffled by the walls of a Dumpster while a Texas drawl – as with all of the Southern variety – is soothing to the ear.

That’s neither here nor there for the purposes of this post. What will be of interest to you, our local readers, is that the Philly accent placed as the eighth sexiest accent in these United States.

Seriously. I’m not making this up. I could never make up something that outrageous. Yet, to some, our hoagie-mouth jawn is nothing short of arousing.

Here’s how they explain that surprising finding:

“One of the world’s most unique dialects is in the Delaware Valley – the infamous Philly talk. The words ‘fight’ and ‘bike’ sound more like ‘foit’ and ‘boik,’ while ‘very’ becomes ‘vurry.’ It’s a thick accent, but hey, if it’s good enough for Will Smith…”

I’m no fancy big-city linguist, but sure, let’s chalk up another win for Greater Philadelphia even though it’s entirely misguided to pretend that people in Boston and New York are among those who speak sexier than us. (We can give a begrudging tip of the cap to folks in Mississippi and Hawaii, though.)

“Turns out that people really do like the Philly accent!” responded Big 7’s Sarah Clayton-Lea when I asked how Philly ranked so well on the aural sexiness scale.

Turns out that people really DON’T like the Jersey accent, though, with it falling to the 49th spot despite the fact that the state is physically sandwiched between two of the top eight.

Clayton-Lea said readers were given the 50 options on the list to choose from, and respondents from across the country, as well as Canada, the United Kingdom and other English-speaking countries also participated.

You can check out the entire survey via this link, you sexy-talking people you.