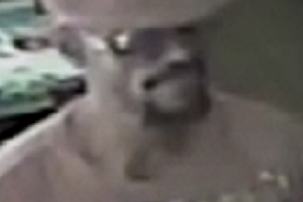 Investigators are looking for this suspect who robbed a Shell gas station in Wilmington and shot an employee.

Investigators have released a photo taken from surveillance video of the suspect wanted for robbing a gas station in Wilmington, Delaware and shooting an employee.

Police say that the suspect entered the Shell gas station at 2501 Newport Gap Pike around 5 p.m. Friday and asked to purchase something behind the counter.

When the male employee, 47, turned around, the suspect pulled out a gun and demanded money from the cash register, firing the weapon and hitting him in the stomach. The victim was able to open the register and hand over an undisclosed amount of cash.

The suspect fled the scene and was last seen getting into a dark-colored SUV, which police say may be a newer model Nissan Pathfinder, with a missing grill. The vehicle drove down Newport Gap Pike southbound. The victim was taken to Christiana Hospital Trauma Center and was treated for non-life threatening injuries.

The photo released Sunday shows the suspect wearing a hat and sunglasses and having a dark goatee and mustache. He is described as a black male standing about 6'0" and weighing between 160-170 pounds with a thin frame.

Anyone with information on the suspect is asked to call Detective Jonathon Packard at Troop 2, Glasgow, at 302-365-8434. Information may also be provided by calling Delaware Crime Stoppers at 1-800-TIP-3333.