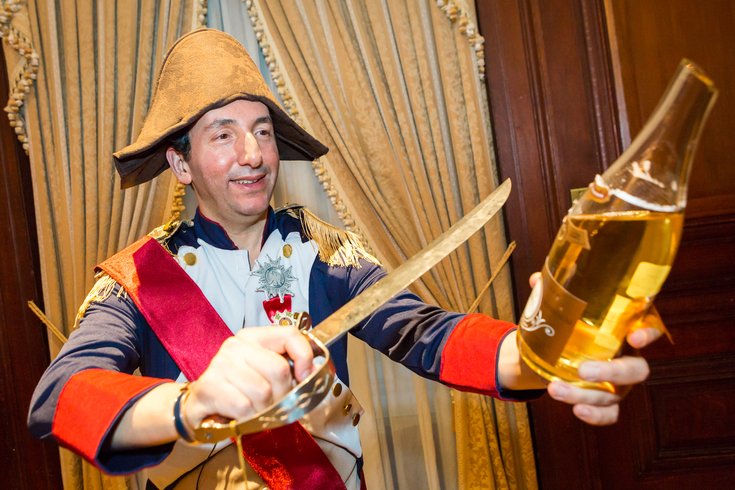 Dr. Pascal M. Jabbour, a neurosurgeon at Jefferson Hospital, leads a Champagne sabering lecture and demonstration at the Union League in Center City Philadelphia. “It is really intense to see a Champagne bottle opened this way. It is very dramatic,” he says.

Champagne sabering is a fun way to impress guests at a party or fancy dinner, but for Dr. Pascal M. Jabbour the ceremonial ritual is more than just a party trick.

The art of opening a Champagne bottle with a sword has a rich history he loves to share.

Jabbour is professor of neurological surgery and chief of the neurovascular and endovascular division at the Sidney Kimmel Medical College at Thomas Jefferson University – and a wine collector. As a surgeon, he can appreciate the accuracy and control necessary to sever the bottle with a sword at just the right spot so the glass doesn’t shatter.

“It is really intense to see a champagne bottle opened this way. It is very dramatic,” said Jabbour, 44.

He often gets invited to parties and celebrations to perform the sabering of the champagne. Last month, at a Champagne dinner at the Union League of Philadelphia, where he is a member, he gave a talk about the origins of the tradition, and a demonstration, of course. Afterwards those interested line up and try it for themselves – with Jabbour's help.

Jabbour's dinners at the Union League, going on five years now, are among the most-attended events at the Center City club, he said. He first taught himself the art about 10 years ago after seeing it performed at celebrations. Curious about the history behind it and the skill needed to achieve the proper technique, he read up on it and practiced as much as he could.

THE ORIGINS OF SABRAGE

According to Jabbour, there are different legends surrounding the origins of sabrage –  all centered around the Napoleonic era in France. According to one legend, Napoleon Bonaparte’s soldiers riding home victorious from battle were thrown bottles of Champagne by townspeople to celebrate. Instead of trying to unwrap and pop the cork from the saddle, the story goes, they would put saber to bottle instead. The flourish became a hallmark of Napoleon’s soldiers.

Another story revolved around Madame Clicquot, a young widow who inherited her late husband’s wine business and grew it into a world-renowned Champagne house, the House of Veuve Clicquot. Veuve means widow in French. Invited to her vineyard, the emperor's soldiers would try to impress her with their Champagne-sabering skills. 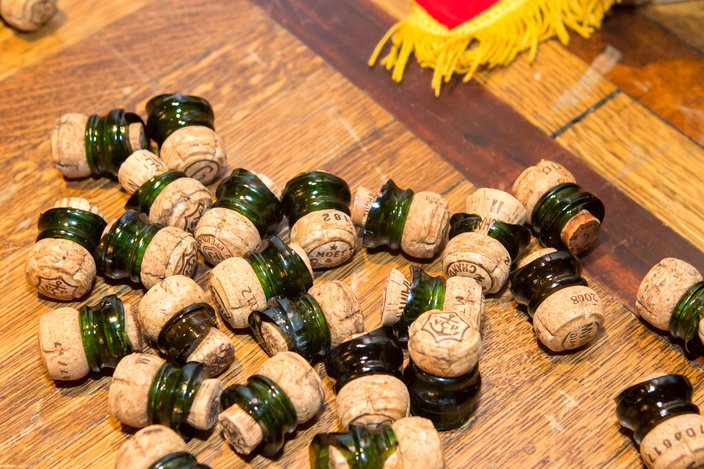 Champagne corks sabered off bottles gather on the floor at the Union League after a demonstration by Jefferson Health neurosurgeon Pascal Jabbour. The trick is to make a clean cut where the seam and the lip of the bottle meet, he says.

It took at least 50 bottles of Champagne for Jabbour to perfect his technique. He uses a sommelier saber which is dull on both sides, but you can also use a kitchen knife as long as you don’t use the sharp edge.

(ONE WORD OF CAUTION, if you intend to practice sword-wielding yourself: Sabering Champagne bottles can be dangerous if not performed properly; the bottle can shatter, and glass and cork can fly, injuring those nearby. It's best attempted with the guidance of an expert.)

Never use a saber on a bottle of regular sparkling wine, he noted. Real Champagne – sparkling wine from the Champagne region of France – is always best because you need a bottle made of quality glass, he said.

To stay in saber-wielding form, Jabbour lives by the sword whenever he opens a bottle of champagne.

“I like to drink champagne so it is not a problem,” he said with a laugh.

Jabbour, who lives in Chestnut Hill with his family, also likes to collect swords. He has a sommelier saber and a sword his son brought home from England and he is hoping to bring home a samurai sword from an upcoming trip to Japan.