Millions spent to make Roosevelt Boulevard safer, but is it?

Since 2005, $19 million has been spent to improve safety along Roosevelt Boulevard, the infamous 12-lane thoroughfare where more than 100 people have died during that time.

But is it any less dangerous?

Perhaps, but the city will spend another $5 million to study additional improvements, with one possible option being a major redesign of what is commonly known as "the Boulevard."

“The Streets Department is in favor of a complete redesign,” said Richard Montanez, chief engineer for the department. “We realize this would be a Herculean task. … We know it may sound really far-fetched and probably a several billion-dollar thing.”

Nonetheless, Montanez says, the department wants consultants to look at all options.

“We want to treat the Boulevard as a blank canvas,” he said.

This isn’t the first time there have been grand designs for the Boulevard, which has served as the spine of Northeast Philadelphia for generations.

Dating back to 1902, when Mayor Samuel Ashbridge pushed for a road to link central Philadelphia to communities in the northeast section of the city, the Boulevard first ran from Broad Street into the Torresdale neighborhood. When it was extended to Pennypack Creek in 1918, the road was renamed after Theodore Roosevelt. The extension continued until it reached its current end point just across the border of Bucks County in the late 1950s.

But as the Boulevard grew, so did its reputation for serious accidents. In recent years that reputation has gone national.

From 2005 through 2014, 108 people have died on the expressway, which carries an average of 68,230 vehicles daily, made dangerous, in part, because of its proximity to a densely developed residential area, businesses and shopping centers, and aggressive driving.

A report by a state transportation advisory committee noted that "As a 12-lane, divided highway, Roosevelt Boulevard offers some of the most challenging intersection geometry in Pennsylvania from a traffic engineering perspective."

In 2001, State Farm Insurance named the Boulevard's intersections at Red Lion Road and Grant Avenue as the second and third most dangerous in the country, respectively.

A few years after that dubious distinction, red light cameras, the first of their kind in the city, were installed at the Grant Avenue intersection, with $100 fines. Today, cameras monitor nine Boulevard intersections, including Red Lion Road.

But employees of businesses at or near the Red Lion intersection say accidents are commonplace.

"There are accidents here all the time; at least once a month," said Sherry McCarthy, a manager at Fat Jack's BBQ, just north of the intersection.

"There was one just yesterday, a big accident," Deepak Kumar, an employee at the Shell station at the intersection, said Friday.

He believes trimming some of the trees along the Boulevard would make it safer. "Trees could be on the sides, not in the middle," he said.

EXPRESS LANES FOR CARS AND BUSES?

One central idea for the upcoming study to tame the Boulevard, says Montanez, is to keep separate the different modes of transit.

“Most people in the center lanes are coming from the suburbs and heading to Center City. If we can separate that as express from local transit and separate buses and bikes and pedestrians, that is what we envision,” he said.

Montanez says he expects consultants to be hired by year's end, and the study, funded by a federal grant of $2.5 million along with $1 million from the city and $500,000 from SEPTA, completed in 42 months.

In addition, the Delaware Valley Regional Planning Commission is studying bus travel on the highway. Montanez says one of the outcomes could be express lines that don’t have nearly as many bus stops.

If those ideas come to pass, they would be the latest measures taken to reduce traffic, speeding and aggressive driving on the Boulevard, which resembles a straightaway for stretches.

A high-profile tragedy on July 17, 2013, which police said was caused by two racing drivers, spurred a host of improvements. 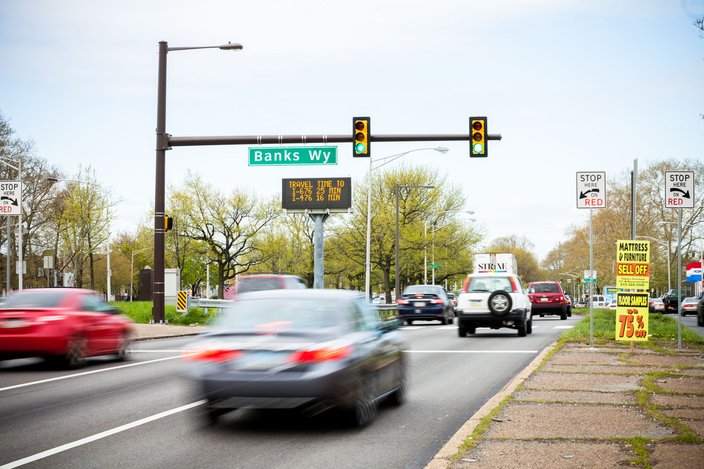 Banks Way is named after Samara Banks and her three children who were killed on the Boulevard. (Thom Carroll/PhillyVoice)

Samara Banks, a Feltonville resident, was crossing the Boulevard with her four sons at a Second Street crosswalk when they were struck by a car shortly before 10:30 p.m. Banks, in her late 20s, and three of her sons – aged 9 months, 23 months and 4 years – were killed. Banks' five-year-old son survived. One man, whom police say was racing another, faces murder charges.

At the time of the accident, there was no traffic light there, much less a red light camera. Eleven months after the tragedy, a signal was installed and the intersection was named Banks Way.

The city also spent about $650,000 to install more than 15 ramps for the disabled in the area of the intersection, and is looking at other traffic-calming steps, including reduced speed limits, Montanez says.

Lt. Gov. Michael Stack, as a state senator, responded to the crash by sponsoring a bill in 2013 calling for additional cameras to catch speeders but it has gained no traction.

Safety measures since the summer of 2013 include repainting traffic lines along its length at a cost of $750,000.

And since 2002, PennDOT has awarded $2.1 million in grants to pay for increased traffic enforcement by city police officers.

PUTTING THE BRAKES ON DANGER?

State officials and the Philadelphia Parking Authority say the red light camera program is a success. But not all statistics support that.

Eric Bugaile, the executive director of the state house transportation committee, who worked on drafts of the red light camera legislation, calls the program a “success story.”

According to a 2011 state Transportation Advisory Committee report, the cameras reduced the number of crashes 24 percent for the 10 intersections with three years of enforcement. They have reduced red light violations by an average of 48 percent during the first 12 months of enforcement. 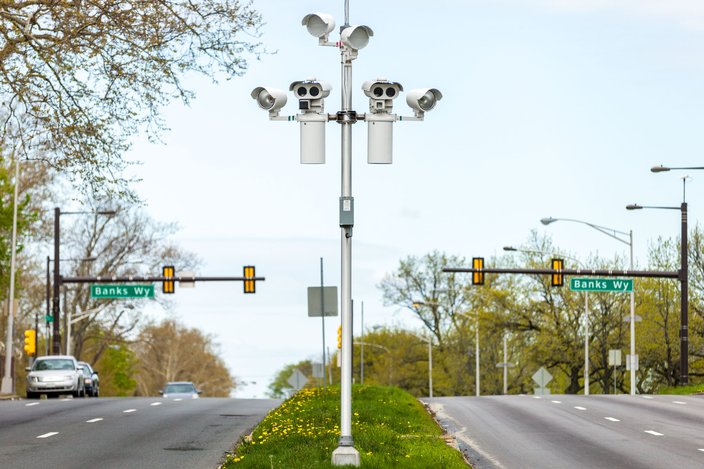 “At each intersection on Roosevelt Boulevard where the cameras are installed, data shows the number of violations has decreased since the program began,” Blessing said in an e-mail.

Other statistics are less encouraging.

On average, however, the number of crashes and deaths each year has remained steady over the last decade, when the first red light camera was installed. Statistics do show a significant decline in serious injuries and pedestrian injuries since 2013.

And he acknowledged, “It’s very hard to judge safety improvement for something happening along a 12-mile road. Drivers and pedestrians have a certain responsibility too.”

The city also views red light cameras as a positive development, but not the ultimate answer.

“I think it’s helped to a point,” Montanez said. “If everything were working perfectly I wouldn’t be putting out a $5 million planning grant.”