Temple, Villanova athletes stand up to the competition on graduation rates

Temple has been having a historically great year in football, ranking in the Top 25 for the first time since 1979. Now that the Owls are playing with the big boys, however, it's time to compare how they stack up to top-ranked teams in another way: how many players actually get to leave Temple with a degree?

The NCAA released data last week on the graduation rates of student athletes in all sports from baseball to water polo. Temple's rankings are solid: within the Top 25, it's beat only by Clemson, Stanford and Notre Dame.

In the realm of Top 25 men's basketball, Villanova was also near the peak, beat only by...again, Notre Dame. In case you didn't need another reason to hate the Fighting Irish.

Note, however, that the NCAA's formula for calculating those graduation rates is rather generous. Unlike the federal government's formula, the NCAA's "graduation success rate" (GSR) doesn't count students who dropped out of college while still in good academic standing

"The rate assumes that the majority of students who leave academically eligible transfer and eventually graduate from another school," said NCAA spokesperson Michelle Hosick. (More on the NCAA's methodology can be found here.)

As a result, you can see pretty wide discrepancies between the NCAA's rate and the federal graduation rate (FGR). Take Kansas: its men's basketball rate appears to have a fantastic 100 percent graduation rate, but the federal rate is only 36 percent. 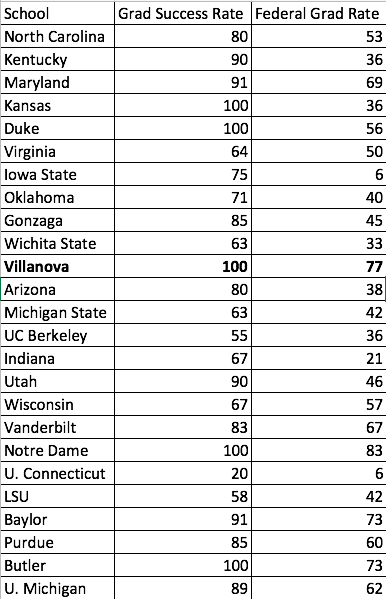 Graduation rates for men's basketball teams in the AP's Top 25 ranking, for the class that started college in 2008. Both rates look at how many students graduate within six years of entering college.

Villanova's men's team does quite well within the top 25, with an FGR of 77 percent. Its women, however, do even better -- a perfect 100 percent graduation rate. Women in general are more likely to graduate than men: the nationwide graduation rate is 62 percent for women versus 56 percent for men, according to the National Center for Education Statistics. 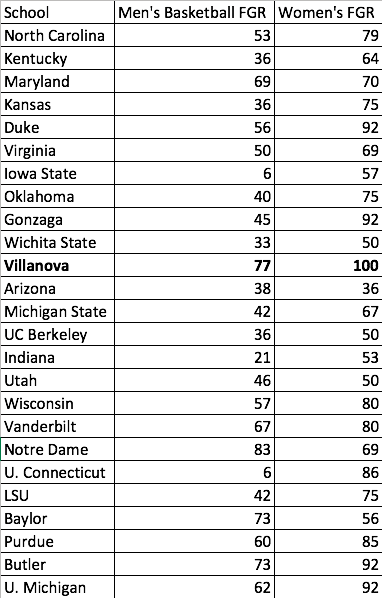 Back to football: as the table below shows, Temple's six-year federal graduation rate was 65 percent for the class that entered college in 2008. That rate has been rising almost every year since 1998, when the federal graduation was only 37 percent. 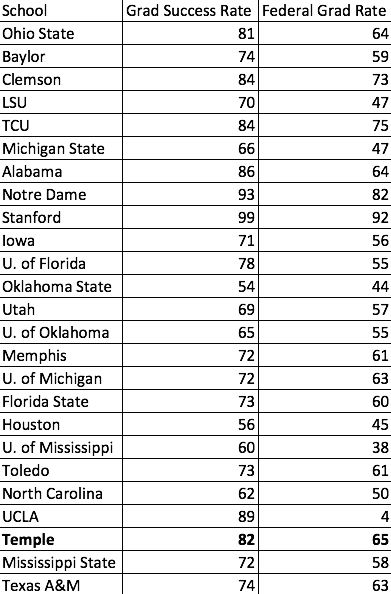 Graduation rates for football teams in the AP's Top 25 ranking.

College athletes often have just as much trouble finishing college as their fellow classmates, even with the help of scholarships. But the nation's numbers are trending up as more schools decide that tackling low graduation rates is just as important as tackling your opponents.