The 2017 NBA Draft Lottery is now just a few days away, and there are A LOT of different ways it could play out for the Philadelphia 76ers, who last year won the first-overall pick and selected Ben Simmons.

With a better than 50 percent chance of landing two top 10 picks and an almost 15 percent chance of winning the No. 1 pick for the second straight year, it's no surprise that's Sixers fans are excited for Tuesday night to arrive.

Recently, our own Rich Hofmann ran through a few scenarios that would really get fans fired up – both the good and the bad – but with so many possibilities and so many trade implications in play, why not take a look at a few more.

If you need a refresher on those odds, the potential fallout from trades made under Sam Hinkie, and what it all means heading into Tuesday, here you go.

What follow are 10 different lottery projections (via tankathon.com). I promise these are the first 10 that came up and not cherry-picked to try to prove some kind of point. 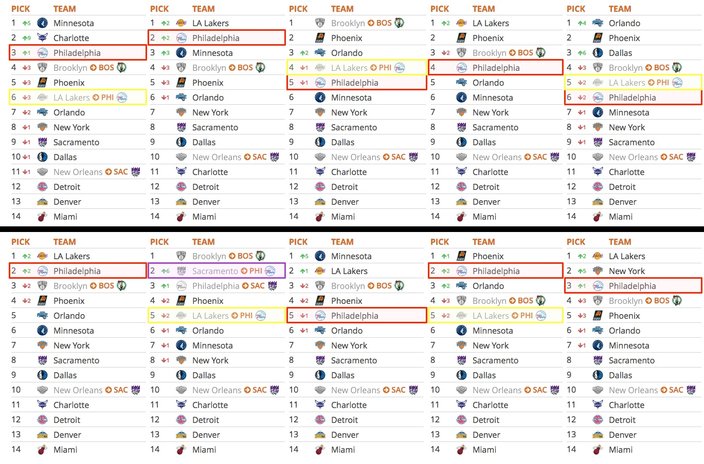 First, you'll notice the Sixers didn't land the top pick in any of those. That's not ideal, although there are still some pretty good ones in there. Five times, the Sixers picked up the Lakers' top-3 protected pick – and one of those times, they also got the right to move up to No. 2 thanks to the Kings' pick-swap.

If this one plays out, it's going to be pretty wild. 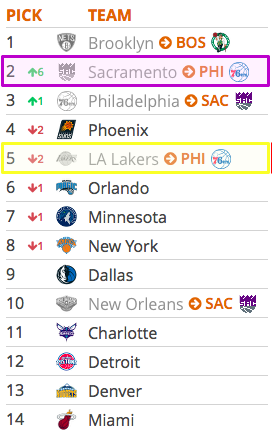 This one would also be pretty crazy. 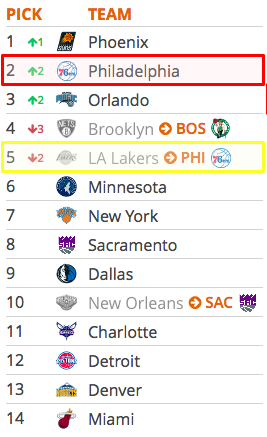 Another interesting scenario for the Sixers would be if they landed back-to-back picks, which could potentially be as high as three and four, but in the simulations above, the best we could do was four and five.

Perhaps the scariest thing for Sixers fans in all this is the fact that 40 percent of the time, they failed to land one of the top three picks – luckily for them, however, two of those four instances resulted in the Sixers acquiring the Lakers pick.

In other words, what would you rather have, the third-overall pick or the fourth and fifth picks?

Give me the latter.

Anyway, it was a slow day in sports, so hopefully, this can hold you over. And don't worry, by the time you're reading this, the lottery will be less than three days away.