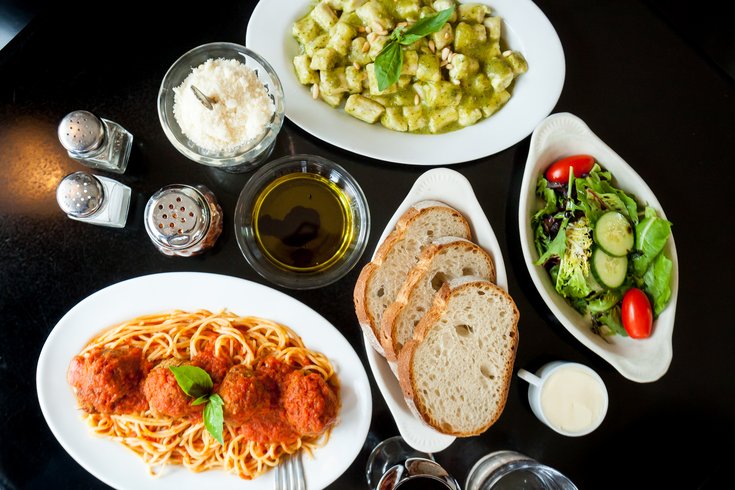 With its gleaming chrome and neon exterior and two street-facing windows dressed with storybook holiday scenes, it’s hard to miss Termini Brothers Bakery. But just across Eighth Street is Mr. Joe’s Cafe, an unassuming corner restaurant that was born out of the Termini family’s sweet Philadelphia-by-way-of-Sicily story.

While most folks who spend their lives in the kitchen dream of retiring from feeding the masses, Vince Termini Sr. took another path for his golden years. Taking over the original storefront that housed Termini from 1921 to 1938, he opened Mr. Joe’s Cafe, a tribute to his father and the kind of under-the-radar red-sauce spot that South Philly dreams are made of.

Sitting by a sunny, lace-curtained window in the tiny dining room, Termini Sr. tells a classic coming-to-America tale that involves two brothers from Enna in Central Sicily making their way to the States and opening a bakery during the not-so-sweet years of the Great Depression.

Gaetano Termini was the first to come over, working for three years for Stetson Hats. His brother Joe made the trans-Atlantic journey three years later in the no-frills steerage section of an ocean liner called the Giuseppe Verde joined by another brother named Mario. Upon entering the States at Ellis Island, Mario, a mute but gifted and talented shoemaker, was denied access to the U.S. and sent back to Italy, while Joe made his way to South Philly.

Having apprenticed in a Sicilian bakeshop as a child, the plan was for the two brothers to open up a bakery focusing on the ricotta-based sweets of their homeland. Even with the precarious financial climate, the bakery was a hit, and in 1938, they moved across the street to roomier digs. 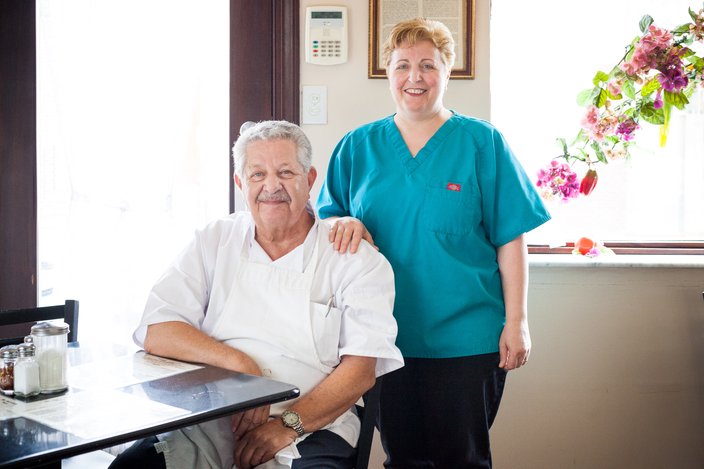 The original bakery building at Eighth and Greenwich was sold to a barber and his wife who gave haircuts and shaves out of the shop until 2004. When the barber’s wife passed away, the building was offered back to the Termini family.

“I said I would love to buy the building back because I was getting up in years,” Termini Sr. says. “I wasn’t doing too much, my sons took care of the bakery, and I bought it back, and that’s how we made the café here.”

Baking might have been Termini Sr.’s living, but his passion for home cooking came from his grandmother. While he was growing up, his mother spent days at the bakery, so Termini Sr. headed over to her warm kitchen at Eighth and Annin.

“She was a good cook and she introduced me to the operas; we used to listen to the operas together, and I still love the operas,” Termini Sr. explains over a faint aria playing in the dining room. “She enjoyed me and I enjoyed her. We spoke in Italian together.” 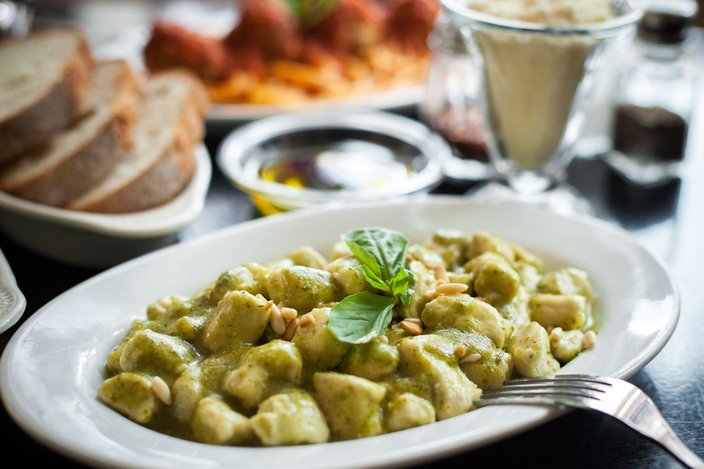 The menu at Mr. Joe’s Cafe is a familiar lineup of paninis, salads and pastas, all made with the exacting care of home cooking. Ricotta gnocchi are rolled by hand and sauced with a garlicky housemade pesto. Termini Sr. makes big batches of veal, pork and beef meatballs and turns out a chalkboard menu of specials like fusilli with braised broccoli rabe and tomato sauce-summed braciole stuffed with garlic and cheese.

Meals here are a leisurely affair beginning with slices of crusty bread from Leonardo’s Italian Bakery in Feasterville and a simple mixed-greens salad dressed with balsamic. Anna Maria, Termini Sr.’s right-hand woman, runs the dining room, beaming while filling customers’ glasses full of complimentary Burgundy straight out of a jug. Slices of cake and cannoli are on the house and come, as one might imagine, from Termini Bakery just across the street.

During lunchtime, the dining room is full of regulars, and that’s just the way that Termini Sr. likes it. 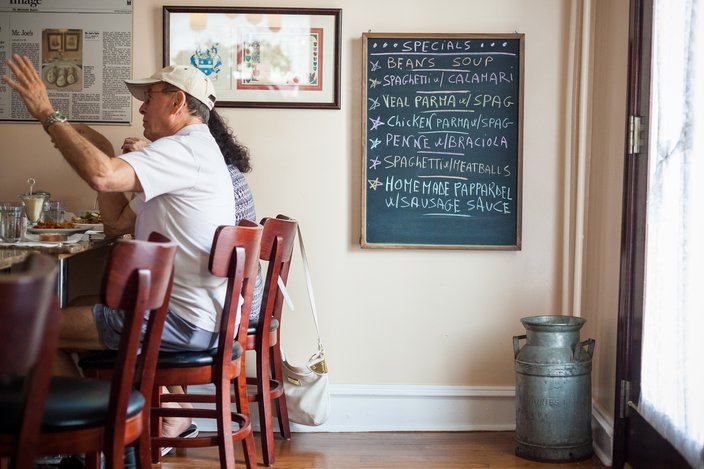 The specials board at Mr. Joe's Cafe. 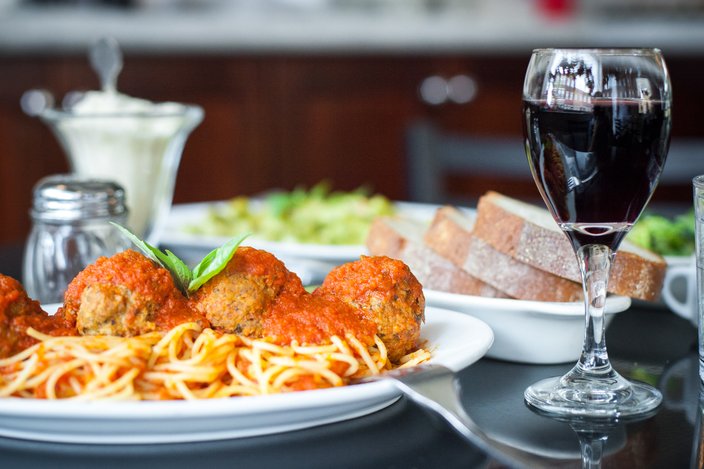 Spaghetti and meatballs in a marinara sauce served with a complimentary glass of house red wine. 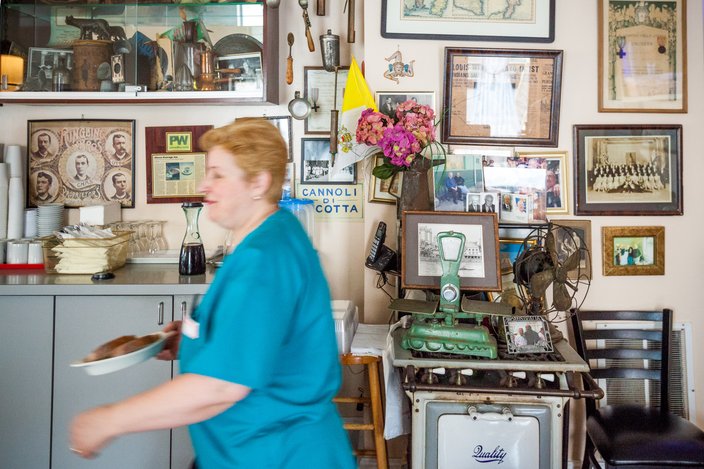 The interior of Mr. Joe's Cafe. 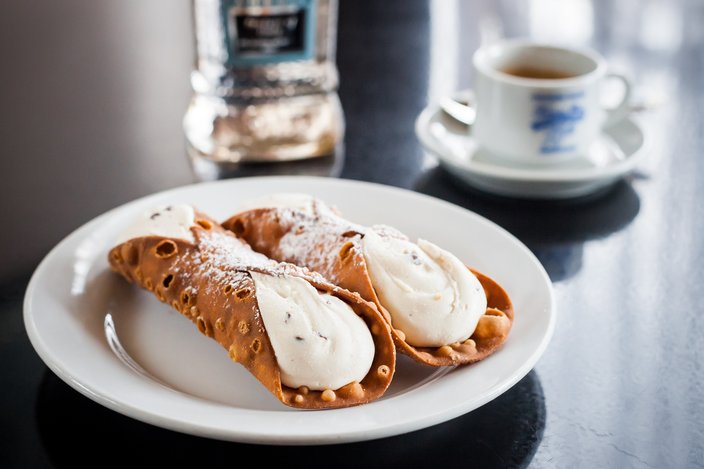 Cannoli from Termini Bakery and an espresso with a splash of sambuca at Mr. Joe's Cafe.