The pacu, an exotic fish native to South America, is in the same family as the piranha 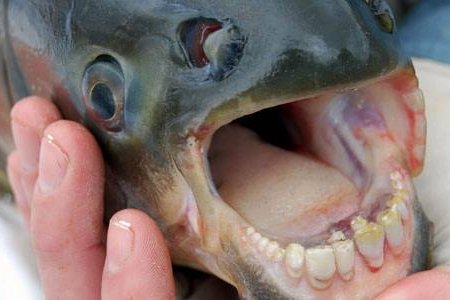 A fisherman at a South New Jersey lake caught an exotic fish native to South America with human-like teeth and an overblown reputation for munching on male genitalia.

A South Jersey fisherman reportedly caught an exotic fish with a reputation for biting off testicles in a Burlington County lake Sunday.

According to The Huffington Post, Ron Rossi, a resident of Delran Township, was fishing at Swedes Lake when he wheeled in an exotic pacu.

Pacus, tropical freshwater fish typically found in the Amazon River and in the same family as piranhas, got their reputation as "testicle-eating fish" from a 2011 episode of Animal Planet’s “River Monsters,” during which the show host told of two man-meets-fish encounters.

Host Jeremy Wade said Amazonian locals told him two fishermen in Papua, New Guinea, had been castrated by something in the water, however, pacus typically eat plants and smaller fish.

Experts have guessed the pacu found at Swedes Lake likely began as a pet before being released.