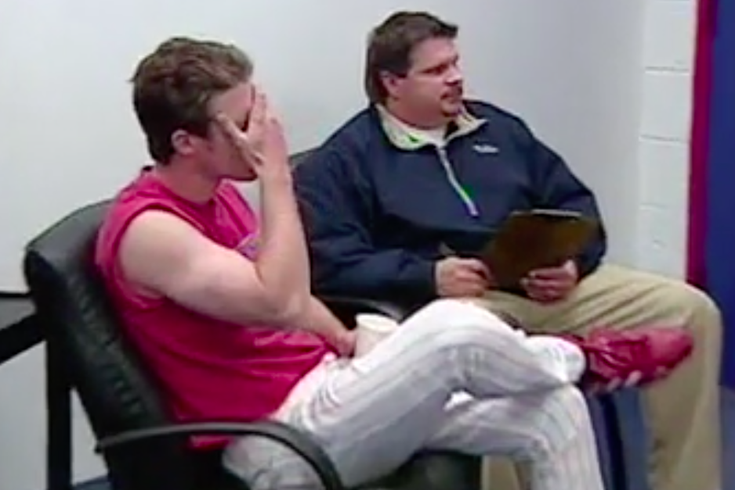 John Kruk, Larry Bowa, and Ed Wade once tried to tell Chase Utley the first few games he played in the major leagues had to be forfeited.

CLEARWATER, Fla. – Unless I somehow just hadn’t seen this, it’s difficult to believe this has been hidden in some unchecked closet of video clips in the offices at Citizens Bank Park or Comcast SportsNet for a dozen-plus years.

Perhaps it was buried in the rubble when Veterans Stadium was imploded. Surely it was in the Phillies 2003 Video Yearbook. Maybe we all just forgot.

But, in the digital age, how hasn’t anyone seen this in years? Because it’s gold, perhaps more on all-around performances by the key players (John Kruk, Larry Bowa, Ed Wade, and Chase Utley) than the content itself. It's not quite on the level of Kyle Kendrick being traded to Japan, probably because Utley wasn't a very easy target.

Here’s what happened: the Phillies tried to prank Chase Utley not long after he made his major league debut 14 years ago. The prank explanation itself doesn’t sound plausible – forfeiting a whole slew of games because of paperwork? - but again, it’s still worth watching because it’s kind of a Who’s Who of key players throughout different times in Phillies history. There’s even a Ruben Amaro Jr. dig!

H/T to Comcast SportsNet for digging this out.

Had this been a real actual rule, the following highlight would have been erased from existence.

Perhaps Comcast was able to dig this out while looking for Kruk footage since he has returned to the team's broadcast booth this season.

As for Utley, he's still going strong. The 38-year-old second baseman entered Monday hitting .400 (16-for-40) with two home runs in 14 games with the Dodgers this spring.
UPDATE: Kyle Kendrick apparently still hasn't really gotten over the traded-to-Japan prank. Thanks to Brett Myers – the man who pulled off the prank, fittingly – for sharing.

https://t.co/62dn7rCpbI Stop whining Kyle it made u famous for the greatest prank of all time! Own it!