This time, Odubel Herrera was allowed to walk it off 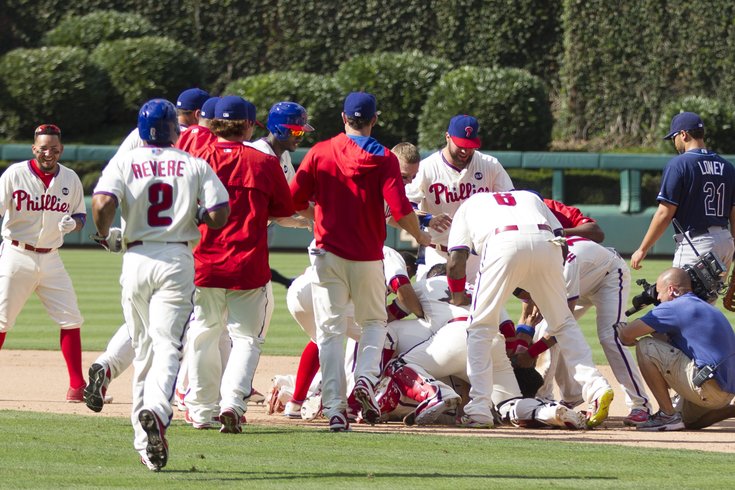 Phillies players celebrate after Wednesday's 5-4 win over the Rays.

What a difference a day makes.

Odubel Herrera, who failed to run out a ground ball in Tuesday's loss to the Rays, won Wednesday's game on a pinch-hit, walk-off single in the 10th inning that plated Domonic Brown, who, by the way, was 6-for-10 in the series.

Interim manager Pete Mackanin explained his decision not to bench Herrera [more on that, here] after the base-running gaffe and said that the reason the 23-year-old outfielder didn't start the series finale was about getting Ben Revere in the lineup, not punishing Herrera.

“I want to keep Revere in there and I’ve got to play a lot of these guys, so I pick and choose," Mackanin said after the win, his team's fifth in six games since the All-Star break. "Maybe he’ll look at it as a punishment. Maybe he will. It wasn’t, but if he does, that’s fine. It’ll sink it."

When asked how he goes about making sure that happens, Mackanin said the following:

“What we constantly do is explain to them why you can’t do that. It’s almost like when you hit a base hit, you’re always thinking a double. If you hit a double, you think a triple. For someone to assume after you hit the ball to the outfield that they’re not going to go any further than first base is the wrong approach. He assumed that the first baseman was not going to throw the ball to second. You can’t do that and look what happened. All you can do is explain it to them and hope that they remember it. He’s been told. Every time a guy makes a mistake, they’re told by one of the coaches or myself. We get ‘em and explain why they didn’t do things properly."

As for Herrera, he wasn't sure if he was being punished or not, but said (with the help of Juan Samuel translating) that "his mentality the whole time is he comes to work and he’s ready to play."

And today, he was ready when the Phillies called on him, delivering the game-winning hit on the 11th pitch* of his at-bat.

*Meanwhile, Ryan Howard, who was 0-for-5 Wednesday, saw a total of 10 pitches in his five plate appearances.

"Extremely impressive," Mackannin said of the at-bat, which he referred to as a "redeemer."

"He’s a free swinger and he covers so much of the plate," the manager added. "That’s one of the reasons [we went with him]. I was either going to go to Francoeur or Herrera, and basically I chose Herrera for that reason.

"You don’t know where the pitch is going to be and he might hit a line drive off you. He threw him some soft and he threw him a lot of fastballs up and away, and he covered both of them. So being a free swinger, I felt like he was going to put the ball in play."

And the first person to great Herrera on the infield dirt, or at least the player that did so with the most force, was Jonathan Papelbon, who pitched two scoreless innings and picked up the win.

Check out the hit he laid on Herrera:

After the game, Herrera said the hit was "not that hard but it hurts a little."

It looked pretty hard to me.