As market dries up, Phillies may have missed chance to trade Papelbon

According to a report, Amaro may be out of options -- and it may be through no fault of his own 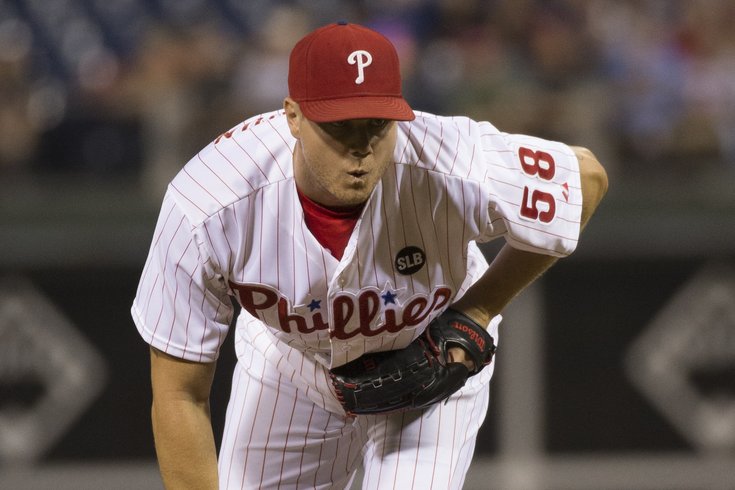 Not too long ago, I wrote about what it would mean for the Phillies if they were unable to trade starting pitcher Cole Hamels prior to the July 31 trade deadline.

The conclusion I came to was this:

Staying in Philadelphia throughout the current rebuilding process may not be what Hamels wants most -- he's already said he'd like to pitch for a contender -- but that doesn't mean it isn't a totally viable and reasonable decision for the Phillies to make. [Read more...]

In the two weeks since, there has been little in the way of new trade rumors* involving the team's most-coveted asset. However, closer Jonathan Papelbon -- another pitcher many consider to be among the Phillies players most likely to be dealt -- has remained in the news.

*Unless you count David Price reportedly becoming available and Royals SP Jason Vargas heading for Tommy John surgery, since both could affect the market for Hamels.

On Wednesday, Jayson Stark of ESPN reported that the Phillies could have a tough time moving Papelbon, still the highest-paid relief pitcher in baseball. Paying a closer that kind of money is insane for a team that has 30 more losses than it does wins heading into the series finale against the Rays.

But it isn't just the money that could make it difficult to move the franchise leader in saves. After all, he's having a great year: 16/16 in save opportunities with a 1.72 ERA, his lowest since 2006 when he had a 0.92 ERA for the Red Sox.

According to Stark, the Phillies may have missed their opportunity, and it has something to do with the hiring of president-in-waiting Andy MacPhail. Now it appears that the three teams actively pursing Papelbon -- the Dodgers, Blue Jays and Cubs -- all seem to have moved on and there's a "strong possibility" the Phillies won't be able to move him.

Here's what Stark (along with Jerry Crasnick) is reporting:

Several sources have confirmed that the Phillies were so close to moving Papelbon last month that they were telling teams to make their best offer. Then they abruptly pulled back, apparently to wait for the hiring of Andy MacPhail as their next team president.

Now, however, there are indications that the Phillies might have missed their best window to trade Papelbon, whose $13 million vesting option for 2016 remains a major hurdle. The Cubs have called up Rafael Soriano. The Blue Jays are moving Aaron Sanchez to the bullpen. The Dodgers are prioritizing starting pitching at the trade deadline.  [ESPN.com]

If it is true that Amaro had a deal in place, only for it to be squashed by interim president Pat Gillick (or other Phillies brass) because the team wanted to wait on the hiring of MacPhail, can you really blame the GM?

I mean, you will. But should you?

No matter who is responsible, the news that he could already be elsewhere likely won't sit well with Papelbon, who again expressed his desire to be traded during media day for the All-Star Game, where he was the lone Phillies representative.

"That's not what I signed up for," Papelbon said. "I signed up with a team that won 102 games, and I expected certain things. It didn't happen, and I've tried to ride that ship and keep my mouth shut as much as I can. But it's time for the Phillies to you-know-what or get off the pot."

Whether you agree with how Papelbon said what he said, it's hard to disagree with the reasoning behind it. On a team that doesn't often enter the ninth inning with a lead, there's not much work -- certainly no meaningful work -- for a closer.

On Monday, general manager Ruben Amaro addressed those comments, saying that he doesn't believe Papelbon will be a problem in the clubhouse if the team is unable to move him prior to the deadline.

With less than 10 days left to make a move, we may get a chance to find out just how professional Papelbon is.

Following the team's 5-4 walk-off win over the Rays, Papelbon, who pitched two scoreless* innings en route to picking up the win, was asked about his status as the deadline approaches and said this kind of trade talk doesn't affect his game at all.

*Papelbon was bailed out in the 9th, after the Rays got runners on the corners with no outs. A ground ball to second resulted in a 4-3-6-3-4 double play that kept the runner on third. Then with two outs, third baseman Andres Blanco made a nice barehanded play on a slow roller to get the final out.

“I can’t speak for anyone else but myself," he said. "But I go and show up and prepare to win and close ballgames no matter where I’m at."

Still, if the team is able to move Papelbon, this may have been his final game as a Phillie at Citizens Bank Park. But he isn't thinking about that either, probably because it's out of his hands.

"You have to ask our general manager that question or Andy MacPhail, or one of those guys," he said when asked if he thought this might be his last game in Philly.

"It don’t bother me," Papelbon added, while putting his sunglasses on. "I just grind and I just show up to play and get outs. That’s all I do."