What if the Phillies don't trade Cole Hamels this season? 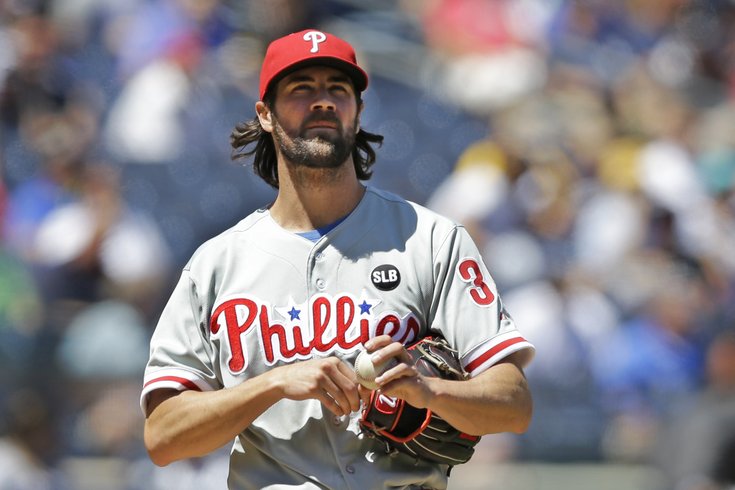 Cole Hamels is going to be a coveted asset as trade talks ramp up ahead of the July 31 trade deadline. But even with rumors surrounding the Phillies ace since spring training, the team has yet to move the 31-year-old lefty, reportedly because general manager Ruben Amaro is seeking more in return than most teams are willing to part with.

Still, the prevailing wisdom suggests that the lame-duck GM -- or his boss --  will find a willing trade partner in the next three weeks. But what if he doesn't? Would that be the worst thing for the team?

A player like Hamels, specifically one with a contract* that pays him fair-market value and will do so for the next three seasons, will typically fetch some quality prospects in return. However, the Phillies have been firm in their demands in any potential Hamels trade.

So firm, according to CBS Sports baseball writer Jon Heyman, that there's a chance Hamels is still in red pinstripes come August 1.

One Phillies person told an interested team executive that they are "not bending" on Cole Hamels, leaving the impression he could stay in Philly for the foreseeable future ... While it is said that Hamels may consider Boston on top of his nine pre-approved teams, some believe the San Diego product may be "California dreamin'" (meaning he's hoping to go home). That is only speculation, and the reality is he'd have to accept any of the nine pre-approved teams.  [cbssports.com]

While the Phillies could use the help replenishing a farm system that has been dismantled since Amaro took over the team following the 2008 World Series title, there's more than one reason this news should be comforting to fans.

First, is Ruben really the guy you want making this move?

When the team recently announced the hiring of Andy MacPhail as the president-in-waiting, firing Amaro right then and there made the most sense. But being the Phillies, that's not what they did. Instead, they decided to keep their GM, operating in the last year of his contract, in place ahead of one of the most important trade deadlines in recent team history.

Amaro won't be alone in making the decision, as interim president Gillick made clear during MacPhail's introductory presser.

Still, the Phillies front office has done little in recent years to instill faith in the fanbase, so the skepticism must remain. It comes down to a question of diminishing returns, a catch-22 of sorts.

The longer the team holds on to Hamels, the less valuable he becomes on the trade market. So would you rather have Amaro trade the former World Series MVP now, or wait until a new GM is in place? Act now, and it could be botched...badly. Wait, and it may still be botched -- these things aren't scientific after all. Wait too long, however, and even the most creative GM will struggle to get what Amaro can now.

Perhaps some of the reason teams are playing hardball with the Phillies is because of the situation in which the team now finds itself. Rival GMs know the Phillies won't be contending any time soon. And they know they want to get rid of pricey vets, like Hamels, in an effort to get younger.

But nothing says the Phillies have to trade him. Odds are, that's precisely why Heyman was leaked* the above information about the team "not bending" on Hamels. Amaro and Co. are looking to get some leverage back.

*Whenever you have information like this leaked, think about who (a team, player, etc.) has the most to gain from that information being out there and it isn't too hard to figure out where it came from. [See : The Big Lebowski].

A few days ago, when Amaro decided to poke his head out and all but end the Chase Utley era in Philly, he said something else that caught my attention, and it was about the possibility of the team not trading Hamels.

Amaro admitted that the team won't be ready to contend next season, and probably not the season after that. But don't they have a better chance with Hamels on their roster, even if it's not until 2017 or 2018?

Hamels will be 33 or 34 by then, and given his relatively spotless injury history (and lack of additional postseason work in recent years) there's no reason to think he won't still be pitching at a high level. He may not be the staff ace anymore -- a more optimistic person than myself would say that's going to be Aaron Nola -- but he'd certainly be more than worthy of a spot in the rotation. Not to mention the kind of mentor he could be to the guys who figure to be the future of the rotation (Nola, Jesse Biddle, etc.).

Staying in Philadelphia throughout the current rebuilding process may not be what Hamels wants most -- he's already said he'd like to pitch for a contender -- but that doesn't mean it isn't a totally viable and reasonable decision for the Phillies to make.