Utley, Howard are worst in MLB at their positions 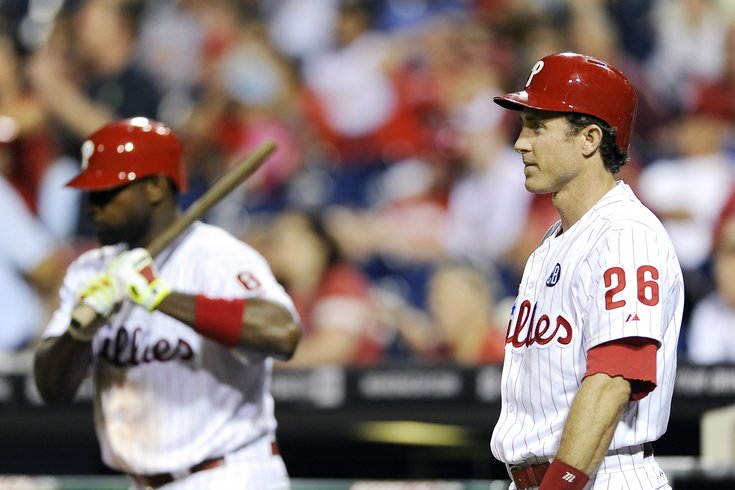 Chase Utley and Ryan Howard are both still free agents looking for work as the beginning of spring training nears.

Aside from Maikel Franco and -- at least recently -- Cesar Hernandez, there hasn't been anything close to an all-star-caliber position player on the Phillies roster. Even that may be giving more credit than is due.

And a pair of former mid-summer classic staples, Ryan Howard and Chase Utley, couldn't be further from it.

Howard has the worst wins above replacement (WAR) total of any regular first baseman in baseball.

Chase Utley, who may not be the everyday second baseman when he returns from the disabled list, has the lowest WAR among second baseman.

In fact, they have the first- and second-worst WARs among ANY National League position players that have appeared in at least 65 games this season. Only Rene Rivera of the Rays, who is tied with Utley for the worst WAR in all of baseball, comes close.

It's been so bad for the right side of the Phillies infield, that Sports Illustrated named both players to their Anti-All-Star team, something that fans wouldn't have thought possible just a few short years ago.

Here's what SI's Jay Jaffe had to say about the two Phillies making his list:

By now you know the sad story of the 2006 NL MVP's decline. Howard hasn't been the same since blowing out his left Achilles tendon at the end of '11, and his ill-advised contract for five years and $125 million​ has come to symbolize the decline and fall of the Phillies' NL East dynasty. Though healthy enough to stay in the lineup nearly every day, the now 35-year-old Howard's WAR is a brutal -1.1—his third season out of the last four below replacement level.

If Howard's MLB-worst performance could have been predicted, the same can't be said for that of his 36-year-old teammate, who despite an endless series of leg injuries has averaged 3.5 WAR over the last four seasons while spending about a quarter of that time on the DL, keeping his chances for an eventual election to the Hall of Fame in play. Last year, Utley managed to play 155 games, his highest total since '09, but this year, he hit the DL with inflammation in his right ankle, the remnant of an off-season sprain, in late June. His .532 OPS is the lowest mark among any NL regular with at least 200 PA. He deserves far better, namely an exit from Philadelphia on his own terms instead of being thrown under the bus by a lame-duck GM whose recent incompetence could fill out an All-Vortices of Suck team.  [si.com]

And to put just how poorly Utley's been playing, especially by Chase Utley standards, here's a chart I recently made of his WAR which shows why it's not likely to turn around any point soon: 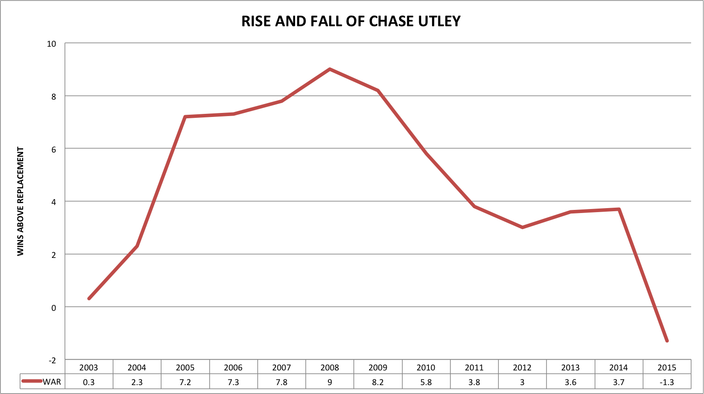 It's why Amaro was right in saying Cesar Hernandez should be the second baseman when Utley is healthy, even if the GM didn't go about it in the best way possible.