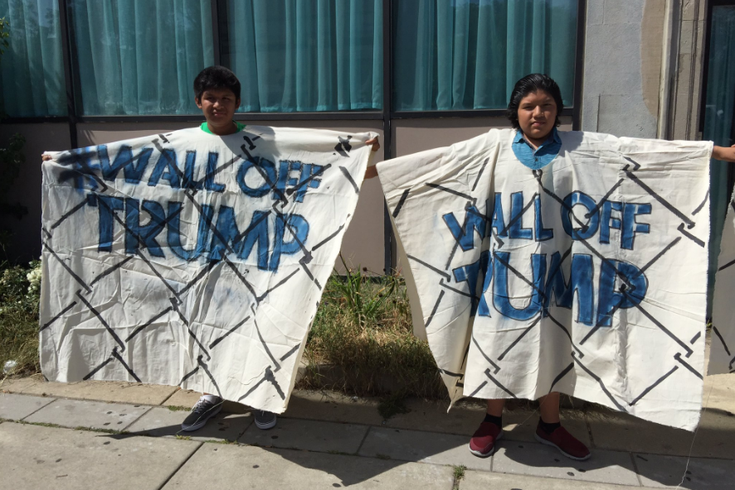 Many gathered to protest presidential candidate Donald Trump's arrival to Philadelphia months before the general election.

Republican candidate for president Donald Trump has officially made his way to Greater Exodus Baptist Church in Francisville where he'll later have a roundtable discussion with the community's black leaders.

With just months until November's historic general election, Trump is continuing his efforts to gain minority votes across the country. Our reporter Brian Hickey – on Twitter @BrianPHickey – reported live from the scene where protests erupted on the streets surrounding the church and venue.

BRIAN HICKEY: Inside scoop on scuffle at Trump appearance in North Philly

The hush-hush meeting will allegedly happen at The View at 800 N. Broad Street and comes days after the candidate's meeting with Mexican President Enrique Pena Nieto. That night during a speech, Trump detailed plans to build a wall along the country's shared border in an effort to remedy illegal immigration.

LIVE on #Periscope: Trump in Philly, protests outside https://t.co/Jb8H524jb7

Good times outside the Philly church hall where @realDonaldTrump will soon meet with pre-cleared attendees. pic.twitter.com/n95hxmuKVW

BLM's Erica Mines offers up the mic to anybody who wants to discuss the issues of the day. pic.twitter.com/Qzf78BYvTi

Trump's lack of popularity among non-white has been a hurdle for him throughout his campaign. One recent poll shows that only 8 percent of black voters support the Republican candidate.

In a recent speech, Trump asked minority voters "What the hell do you have to lose (by voting for me)?"

A spokesperson for Hillary Clinton's campaign said Trump is "out of touch" with the black community in a news release sent out Friday afternoon.

"While pushing a hateful, divisive and dangerous agenda, his photo-op in Philadelphia today is nothing more than an offensive gimmick," said Corey Dukes, Hillary for Pennsylvania' state director. "...We cannot allow someone who has centered his campaign around hateful and offensive attacks against people from all backgrounds to be elected as our next president."