After being exposed to several positive Marlins over the weekend, the first round of testing for the Phils came back negative. 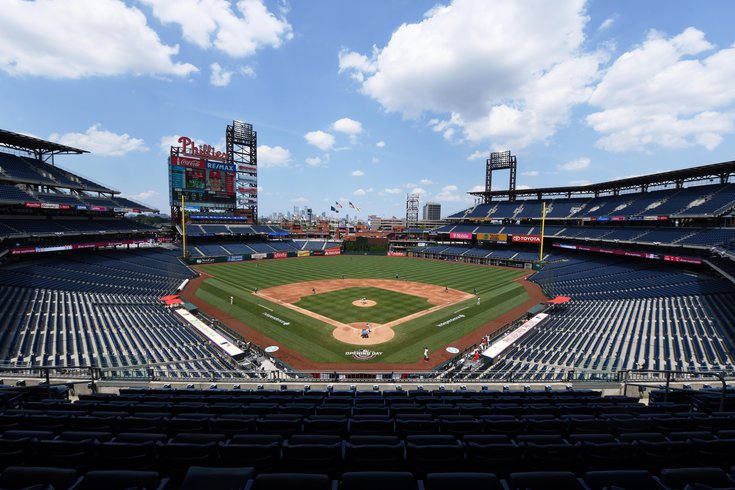 A general view of Citizens Bank Park during the second inning between the Philadelphia Phillies and Miami Marlins.

UPDATE [2:36 p.m.] — According to reports, the Phillies will not play any of their four games scheduled against the Yankees this week. After games in Philly were cancelled on Monday and Tuesday following the team's exposure to Marlins players who tested positive for COVID-19 over the weekend, it appears the league has also called off the their games scheduled for Wednesday and Thursday in New York.

Confirming various reports of this ever-changing schedule... Marlins now off until Monday, Phillies off until Friday, Yankees will play at Orioles Wednesday and Thursday.

The Yankees, however, will still play. With the Marlins scheduled to play the Orioles this week, MLB opted to have those two teams, the Yankees and Orioles, play a series against one another while the Phillies, assuming their tests continue to come back negative, won't resume until Friday against the Blue Jays, and the Marlins won't resume until Tuesday, when they're scheduled to host — you guessed it — the Phillies.

After three straight days with baseball back in our lives, it looks likes Phillies fans will have to wait at least another day for it to return again after positive COVID-19 tests for over a dozen Marlins players and coaches came back during the team's three-game set in Philadelphia.

And now, after both the Marlins-Orioles and Phillies-Yankees games on Monday were cancelled as a result, the Phillies and Yankees will forego Tuesday's game at Citizens Bank Park as well, according to multiple reports.

Heard the #Yankees #Phillies game tonight has been postponed

MLB source confirms that tonight’s Yankees-Phillies game has been postponed. Some Phillies players are still waiting for test results.

On Sunday, prior to the Phillies' series finale against the Marlins, four Miami players were scratched due to the coronavirus, but the two teams were somehow allowed to still play, with the decision to play reportedly coming down to a Marlins team text thread in which they discussed whether or not to take the field. On Monday, an additional eight players were confirmed positive, bringing their total to 12 of 30 rostered players. Their traveling party remains quarantined in Philadelphia as the league and team figure out next steps.

But on Tuesday, it was revealed that the number of positive tests for the Marlins is now at 17.

The latest round of testing from the Miami Marlins found four new coronavirus positives, sources familiar with the situation told ESPN. That brings the total over the last five days to 17. @Ken_Rosenthal first reported the newest COVID-19 cases.

The Phillies, meanwhile, are waiting on the results of their COVID-19 tests taken on Monday, following their exposure to several already-positive Marlins players. They were originally scheduled for a home-and-home series with the Yankees, with Monday's and Tuesday's games to be played in South Philly and Wednesday's and Thursday's games taking place at Yankees Stadium. It now remains to be seen whether or not those games are played as the Phillies worry about an outbreak of their own.

While the postponement of Tuesday's game certainly doesn't seem to bode well for those pending test results from Phillies players, perhaps baseball simply decided to postpone it out of an abundance of caution (which, it seems, is at least the message they're trying to send right now).

Yankees were told the decision to postpone tonight’s game was based on abundance of caution. There was no indication given that any Phillies players had tested positive.

Unfortunately, that doesn't quite rise to the level of "abundance of caution." With a virus that can have an incubation period of up to 14 days, everyone exposed should be quarantined for two weeks. At least, that's what the medical experts have been telling average American citizens. When it comes to professional athletes with billions of dollars on the line, however, an "abundance of caution" simply means waiting 24 hours.

As Jayson Stark pointed out on Twitter on Monday, immediately following the postponement of Monday's game, it's not just the first round of tests the Phillies have to worry about. According to one infectious disease expert he spoke with, the Phillies should be testing every day throughout that incubation period.

This quote didn't make the story. But Dr. John Swartzberg, one of America's leading infectious-disease specialists, told me yesterday:

"If I were the #Phillies’ owner, I might test every day for two weeks." https://t.co/bEbWcQ4Cgu

That being said, the early numbers for the Phillies are actually good (but that might be expected given the life cycle of this virus and the timing of the tests relative to exposure), something that may have been helped by the fact that Phillies players wore masks throughout the game on Sunday following the news of an outbreak in the Marlins clubhouse.

Heard the early results are that no #Phillies players have so far tested positive.

So far, that's a good sign that the Phillies could get back to baseball on Wednesday in the Bronx. Whether or not they should, well, that's an entirely different question. But for now, at least, it seems like the team is planning on making the trip to New York.

With tonight's game postponed, Phillies are planning to bus to New York tomorrow for tomorrow night's game at Yankee Stadium.

That, however, might depend on the results of the tests the players are taking on Tuesday.

Phillies players will be tested again today at CBP. It's drive-thru testing then go home. Travel to NY for game tomorrow

MORE: Report: Monday's Phillies-Yankees game postponed in wake of Marlins COVID-19 outbreak | In an empty Citizens Bank Park, one man is responsible for the cheers of 40,000 Phillies fans