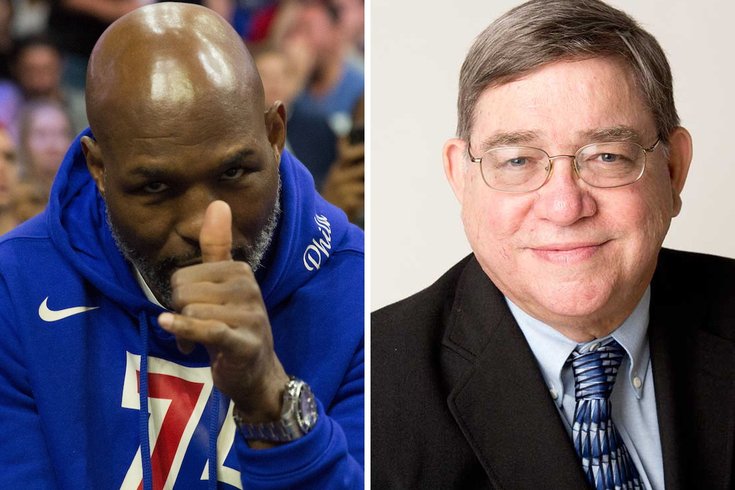 Boxer Bernard Hopkins and writer Bernie Fernandez will both be inducted into the Boxing Hall of Fame.

They both carry the first name Bernard. They both have Philadelphia area roots. They both invested 28 years heavily entrenched in a sport that lost its mainstream cache about 30 years ago, though they somehow managed to keep it on the edges of sports relevance for decades — one with his words and insight, the other with his fists and iconoclastic ways.

Otherwise, Bernard Hopkins and Bernard Fernandez are as close as night and day: the bombastic ex-con from the Germantown section of Philadelphia, and the former U.S. Marine from New Orleans.

They will, however, share a special moment today and very singular moment on Sunday, June 14, 2020, when the two living Philadelphia boxing legends will be enshrined together in the International Boxing Hall of Fame (IBHOF) in Canastota, N.Y. The two received the call earlier this week and on Wednesday it was made official, when the IBHOF released its full roster of inductees.

Hopkins, one of the all-time middleweight greats, is a first-ballot inductee after building a 55-8-2 record, with 32 knockouts over an amazing 28-year career that spanned four decades. Hopkins, who is 54, fought until the age of 51. A unanimous choice as 2001 Fighter of the Year coming off his star-turning victory over Felix Trinidad at Madison Square Garden three weeks after 9-11, “The Executioner” compiled a 16-6-1 (6 KOs), with 1 no-contest, record against champions and Hall of Famers.

Joining Hopkins and Fernandez will be Barbara Buttrick in the women’s Trailblazer category and “The Coal Miner’s Daughter” Christy Martin and “The Dutch Destroyer” Lucia Rijker in the women’s Modern category. Non-participants and observers to be inducted include promoters Lou DiBella, Kathy Duva and Dan Goossen and journalist Thomas Hauser.

Lightweight champion Frank Erne in the Old Timer category and Paddy Ryan in the Pioneer category will also be honored. Inductees were voted in by members of the Boxing Writers Association of America and a panel of international boxing historians.

Because the IBHOF recently reduced the waiting period for eligibility from five years to three, Hopkins’ induction this year was a foregone conclusion.

“I’m happy they changed the rules from five years to three years, because I should still be on this side of the dirt by next June,” Hopkins said, laughing. “I also heard my man Bernie Fernandez got in, so he’s going in with me. That’s great the two of us are going in at the same time. Bernie covered my entire career. He’s a good man and a friend.

“I have to thank guys like Bernie, and Nigel Collins, and a lot of guys in the media who respected me, even though a lot of times they might not have always agreed with me during my career, for this honor. This is the main course. I was inducted in Atlantic City and in Las Vegas. No disrespect meant to them. Those were great honors, but this is the main course.

“This is a little surreal. I don’t believe in luck. I believe in hard work and commitment. I believed in myself, when the world didn’t believe in me. I’m not surprised by this. I’m a little subdued by it. In life, as I get older, I’m learning to have a lot of gratitude for all of the things that I’ve gotten in my life—and boxing is the reason why.

“I was in prison. Everyone knows my story. It is a book. It is a movie. They’re working on a documentary about my life. This is a great honor. This is something that I owe to my past. If I didn’t go through the things that I went through, if I didn’t learn from the mistakes that I made, I wouldn’t be where I am now. When you’re in prison, you have two choices: Keep on going in that direction and stay in prison—or die—or change. I changed. Boxing changed me. This is my page in a book that will now have a legacy. But I was serious earlier, because there were some bridges I burned, and I know there are people that I pissed off.”

Fernandez, who’s been a sportswriter for 50 years, spending 28 at the Philadelphia Daily News, where he covered boxing, Penn State football, the 76ers and wrote long-form takeout pieces, was almost a lock for first-ballot induction. About the only one who didn’t think he was a first-ballot guarantee was Fernandez, 72, who retired from the Daily News on April 1, 2012.

Ed Brophy, the IBHOF executive director, called Fernandez, who writes for TheSweetScience.com Saturday afternoon. As he was sitting on the sofa in his Drexel Hill home, Fernandez wondered why he was getting a call from Canastota.

“I thought Ed was calling to tell me, ‘Hey, too bad, wait until next year,’” said Fernandez, laughing. “One of the first things he said was not to tell anyone. I didn’t even tell Anne (his wife for 51 years) until Sunday. I didn’t think Anne was going to blare the news on a twitter account. This is something that is very special for me and my family.”

Given recent health issues with his back, knees and kidney, the induction has made Fernandez more aware of not only his professional mortality, but his actual mortality, he said. Fernandez, who was one of two inductees of the 25 on the observer ballot this year, will be entering his fourth hall of fame, having been inducted into the New Jersey, Pennsylvania and Atlantic City boxing hall of fames.

“I remember Bernard’s start covering the John Wesley Meekins versus Saoul Mamby main event,” said Fernandez, who is currently working on an anthology of his best boxing works, with a foreword from George Foreman, that’s expected to be released in the summer of 2020. “The paper only wanted 14 inches off the entire card, and 12 were on the main event. Hopkins was on the low undercard and lost a decision. The funny thing is, God help me, I didn’t include him in the story. We didn’t hear from him again for two years.

“But we always knew we were doing the best we could at what we did. One of the things he told me was, ‘You’re a fair guy, you don’t have an agenda, and you call it like you see it.’ Not of all of these guys — whether it’s football players, basketball players, boxers — understand the nature of what your work is; that you’re writing for the readers. You're using your position to be as honest as you can. I’m not sure if that’s as much the case in the world of journalism now in 2019.

“It’s always better when you get these honors when you’re alive and kicking, with your children, family and friends there. I’ll never have a day like June 14, 2020. It will be the top of my professional career. This might even be better than LSU beating Alabama. It is special going in with Bernard.

"Heated rivals, though they may have been all of those years on the court, William Felton Russell and Wilton Norman Chamberlain were friends. If Wilt called Bill Russell it was, ‘Hello, Felton, this is Norman,’ or when Russell called Wilt, ‘Hello, Norman, this is Felton.’ For years, when I would call Hopkins, or he would call me, ‘Hi Bernard, this is the other Bernard.’”

Both Bernards can now call themselves Hall of Famers.