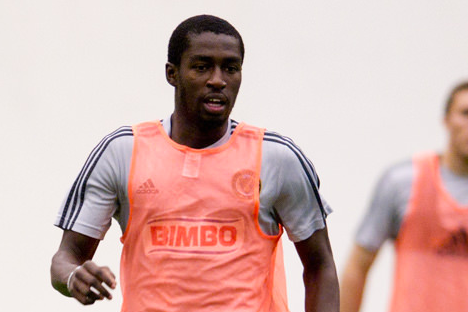 Derrick Jones' Sunday appearance made him the first Philadelphia homegrown player to see the field since September 26th, 2015.

That was Zach Pfeffer's final Union game, a 78-minute shift in a 1-1 draw at New England.

Pfeffer was the first player to sign a homegrown contract with the club, but things were different in 2010. There was no academy system. Bethlehem Steel didn't exist. Pfeffer appeared in just 30 games over five years, spending most of his formative years on loan or sitting on the bench.

No one expected a 15-year old to go directly from high school to the first team, which was the only path forward back then.

These days, a real pipeline exists, and Jones is the first player to traverse it entirely. This is a player who was scouted, brought into the academy, promoted to Steel, then given a shot with the senior team.

"Our program has had a lot of plaudits really based around some of the infrastructure and investment," Academy director Tommy Wilson told reporters on Tuesday. "We have done a lot of good stuff. But I always felt that it was more important we were judged when we started to get players into the first team. Until that time, you can do a lot of good work, but the actual test is when the boys take to the field. And I think what happened the other night is really a testament to our environment, to the program we’ve put in place, and to the infrastructure we’ve created. When I watched Derrick play – I remember speaking to (Sunderland manager) David Moyes when he was at Everton – and he said there should be no surprises when a boy hits the first team because you’ve watched them develop for five, six, seven, or eight years. So I wasn’t surprised what Derrick did because I’ve been working with him so long. I've seen him come from the Lone Star men’s team, to a trialist into the school, then into the residency, and I think the fruits of our labor were demonstrated for all to see on Sunday night."

It took Jones one half to pass Cristhian Hernandez and Jimmy McLaughlin on the list of total minutes played by homegrown signings. Hernandez logged just 26 minutes in a pair of 2012 substitute appearances. McLaughlin played one minute in 2015, one minute in 2014, and 17 minutes in 2012. Those guys just didn't have anywhere to go for meaningful playing time.

With a proper infrastructure now in place, the Union were able to show patience with Jones' development.

He was identified three years ago during a scrimmage with Junior Lone Star FC at Eastern University. Wilson brought Jones in for a trial and signed him to an academy contract, but with no way to attend training sessions, he was placed in a West Chester residency house with other academy students and driven back and forth by host parents. Jones had only been in the United States for a few years after leaving Ghana at the age of 14.

"I’ve been in this for a long time and I understand it’s a long-term project," Wilson said. "You need to look down the road in youth development. You can’t expect overnight success. When I came here we put three teams on the pitch, without any development really, without working with them. Some of the younger ones we had worked with in the Union Juniors program, but the older ones we inherited. That was a real challenge. Derrick really is ahead of the schedule that we set for ourselves. But having worked with him for three or four years, you get to know what he’s capable of. You get to know every aspect of him. When he’s in the school and in the residency, you find out how he lives off the field, what he’s like in the classroom and his view on education. It’s been fantastic to see Derrick grow and develop and mature in such a way. For him and his family, I’m really pleased for them. His grandfather, who’s head of the household, says to me, 'I’m entrusting you with my grandson.' For those families, it’s a big responsibility. For the boys we have in residency, we’re loco parentis, we have to make sure we’re the mother, the father, it’s a home away from home. And we take care of everything, of all aspects of it. The beauty of our program allows us to be holistic in our approach. That came to fruition on Sunday night in Vancouver."

Jim Curtin on Derrick Jones: "My opinion may be biased, but I thought he was the best player on the field for either team."

Jones played a smooth game on Sunday night and earned high marks in our player grades and analysis. He completed 43 of 60 passes, won four of his seven tackle attempts, and had a couple of key interceptions and breakups in the defensive third.

Paired with veteran newcomer Haris Medunjanin, he was smart in his positioning and played a simple game.

"I saw a veteran in a young man’s body," said Wilson of the performance, "Him and Haris playing together, you couldn’t really tell who played in the World Cup and who was a senior professional for all these years. I think the saying about top players is that when they get on the ball, the game starts to slow down. I thought, with Derrick, that happened. I don't remember him giving the ball away. He kept everything really simple. There’s more to come from him. There’s more to come in an attacking sense. He did a lot more defending than he did in the academy because we gave him more freedom. But you had to do that. I thought him and Haris worked as a double pivot extremely well in the game. It was like a relationship that normally takes years to develop. They haven’t played together that often. They've only played in a few preseason games."

There's always a cautionary tale to tell with young players. After all, Pfeffer was poised for a breakout that never happened. McLaughlin and Hernandez became stuck in the system with nowhere to go. We, the media, heaped praise on Freddy Adu, who is now looking for his 14th team in 14 years.

"I don’t think we should look for too much too soon," Wilson said. "Since Earnie Stewart came in, we've promoted a lot of young players and pushed them forward, but we're very, very conscious of 'too much, too soon'. My experience at Rangers was that we had one or two boys who were playing in the Champion's League at 16 and 17, and now they're no longer with the club. You have to be really careful. Derrick’s a level-headed young man. We do our best to keep their feet on the ground. Very rarely will you hear me singling out a player because I don't think it's appropriate for young players. When he’s played his 50th game and he’s with the U.S. national team or whatever, then okay, fair enough, on you go. I’m talking to young boys in here about how they present themselves on the pitch, their appearance, and keeping their feet on the ground. I always say to them, 'once you hit the first team, and you’re there for a year or two, then it’s over to you.' Until then, you’re still developing. And I think Derrick knows that."