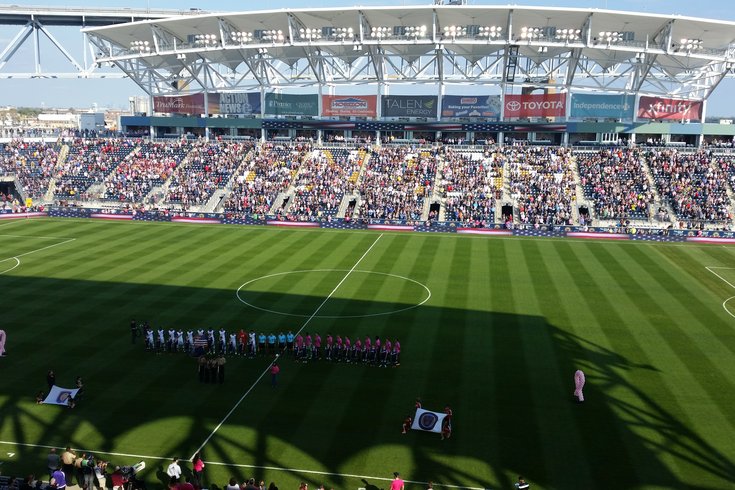 The Union turned in one of their worst performances of the season in Sunday afternoon's 2-0 loss.

With everything on the line, the Philadelphia Union turned in an utterly pathetic performance.

Playing at home for the first time in 35 days, the Union would have clinched the franchise's first playoff berth in five years with a win or draw on Sunday afternoon.

Instead, a feckless final third showing, combined with a defensive gaffe of monolithic proportions, resulted in a 2-0 loss to a lame duck Orlando City team that has conceded a league-high 58 goals in 2016.

Despite the loss, Philadelphia was essentially handed a postseason berth by virtue of Chicago's 2-1 win against New England. With the Revolution remaining three points behind the Union, Jay Heaps' team needs nothing short of a miracle to claim sixth place in the East. Going into week 34, the Revs need to make up a differential of 12 goals while also seeing the Union lose at home to New York.

The chances of that happening are less than one percent.

But the fact that it even came down to the last game of the season is absolutely pitiful. This is a Union team riding a six-game winless streak dating back to August 27th. They've been outscored 12 to five in those four losses and two draws. They will finish below .500 for the second straight season and again finish in the bottom half of the combined table.

Can this season really be considered a success?

"It's not for me to decide if it's a success or not," said head coach Jim Curtin post-game. "Everybody is going to have their own opinion of it, and that's fair. That's what makes sports work. Some people analyze it and say that (we) came up small, or didn't take advantage, or should have finished in first place. The Eagles fans will say after three wins that they're going to the Super Bowl. It's fickle. We were getting better and we're in a tough patch right now. I still think we have a great core of young players. I think we've had some things go our way this year and I also think we've had some things go against us, you know, we've been without Maurice Edu. So, it's up to other people to decide what they think is a success. I think it's a success, to be in the playoffs for the second time in the franchise's history. I don't want to jinx giving up 13 goals next week."

The Union were out-shot 12-10 in Sunday's loss. Of the four shots turned on frame, most were meekly and directly struck at goalkeeper Joe Bendik. Fabian Herbers skied a golden opportunity from eight yards out and Tranquillo Barnetta couldn't steer a free header into the corner.

There were enough chances to get a result, but the finishing left much to be desired.

Defensively, it wasn't always pretty, but the Union backline also did enough to see out a result.

The error that led to the game-winner came from a counterattack, and it was some grotesque blend of nightmare and comedy, almost reminiscent of the Joe Jurevicius 75-yard catch and run in the Eagles' NFC title game loss.

In this case, Carlos Rivas was the opponent running down the field, gifted the ball after a miscommunication and fluffed pass between Fabinho and Keegan Rosenberry. After Andre Blake's bailout save, the ball squirted with backspin towards goal and Rosenberry couldn't clear off the line.

It was a disappointing moment for both Rosenberry and Fabinho, who have played well for the majority of this season.

"I'm happy with the team and that's all I can say," Curtin continued. "I'm happy with this group, I believe in this group, I'm proud of the work that we've done and proud of what my staff has done. I've learned a ton in a year under Earnie (Stewart), and it's special. If we're sitting here with two more wins, everybody is talking about us as the biggest turnaround in MLS. Again, it's that fine line. We came up small in a big game today, but I still think we're better than before. It's a long answer to a long question. There have been highs and lows, things that we're proud of and things we've done that have been really good. You can go through each player and mention a great thing that they did this year. It's for everyone else to decide whether it's been a success."

The jury is still out.

Knowing how we do emotional, knee-jerk reaction in Philadelphia, who knows what these next two games will bring.

Union will go to the playoffs for the first time in five years. They'll also finish with a losing record. Successful season or not?