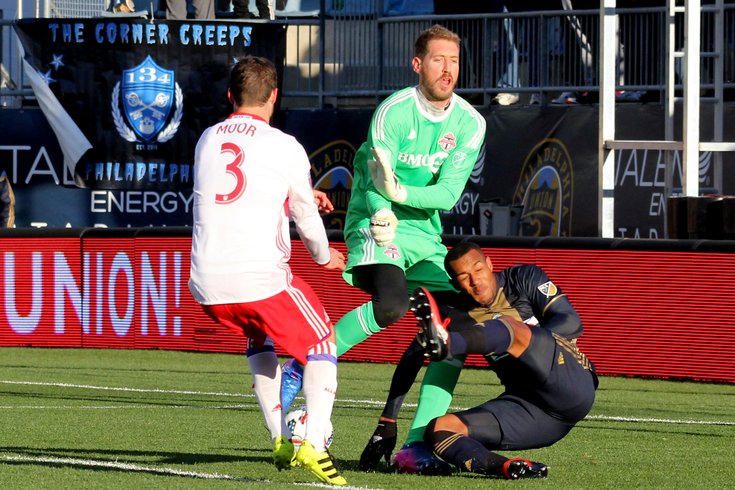 Union striker Jay Simpson suffered a bruised lung when he collided with Toronto goalkeeper Clint Irwin in the first half of last Saturday's 2-2 draw.

First-choice forward Jay Simpson is still on the mend after suffering a lung injury during last week's 2-2 draw against Toronto.

The Englishman was forced from the game midway through the first half, just 17 minutes after scoring the Union's opening goal with a crouching, close-range header.

"He's recovering well," head coach Jim Curtin told reporters via conference call Thursday. "He took a pretty serious crack to his rib area. Turns out it was a bruised lung, not a punctured lung, which was a concern. He was in the locker room spitting up blood, which is always a very scary thing. He was rushed to the hospital. He's a tough kid obviously and I think he had another goal or two in him. So it's disappointing because he was playing very well. Injuries are part of the game and he'll have to recover now. It'll be close for the weekend. It won't be a long-term injury, that's for sure, but it's kind of a day by day situation. He said he was out (Wednesday) with his kids in the snow and he felt like there wasn't a ton of pain, but he was a little bit short of breath. In our league, in the position that he plays, to play with discomfort with a center back hanging off of you, he's going to have to be 100 percent before we get him back and integrated with the group. It's day to day, a tough injury after a great home debut. I'm happy for him that he got a good goal. Realistically, (him playing) this weekend is going to be tough."

The injury took place during the goal-scoring sequence when Simpson collided with Toronto's Clint Irwin.

You wouldn't know from the celebration, which saw the striker run over to the River End, then the Union bench with no apparent signs of distress.

A short time later, he was in obvious pain.

"It was the contact with Irwin, then I think compounding it was how he fell and landed on it," Curtin said. "It didn't help, that part. Within that play was when it happened. The adrenaline I think carried him through it. After you score a goal and the River End goes nuts, then you probably go numb for a little while. He came over to the sidelines and celebrated but didn't say anything about it. A couple minutes later, I think the adrenaline wore off and he said he was having trouble breathing. Give him credit; he tried to push for another 15 or 20 minutes. But yea, when you watch the tape, it is an awkward (injury). It doesn't look like a huge collision. It was obviously a brave goal, but I think the contact was maybe a little stronger then it looked on TV."

Simpson did not train on Wednesday and was questionable for Thursday's indoor practice session at YSC Sports.

The Union travel to Orlando on Friday afternoon, and players who do not practice fully by midweek are almost always held out of the starting lineup for a Saturday or Sunday game.

"He's still being held out from training," added Curtin. "We adjusted our schedule. Usually, Monday is the off day but with the impending storm we decided to train Monday and gave the guys off Tuesday during the storm. We trained Wednesday at YSC and we'll be there again (Thursday). Some of the guys will jump in with Bethlehem Steel and play against Notre Dame, so it will be good to get our young guys some minutes. But yea, Jay did not participate on the field on Wednesday."