As Upper Darby blossomed with diversity, so did stalwart flower shop 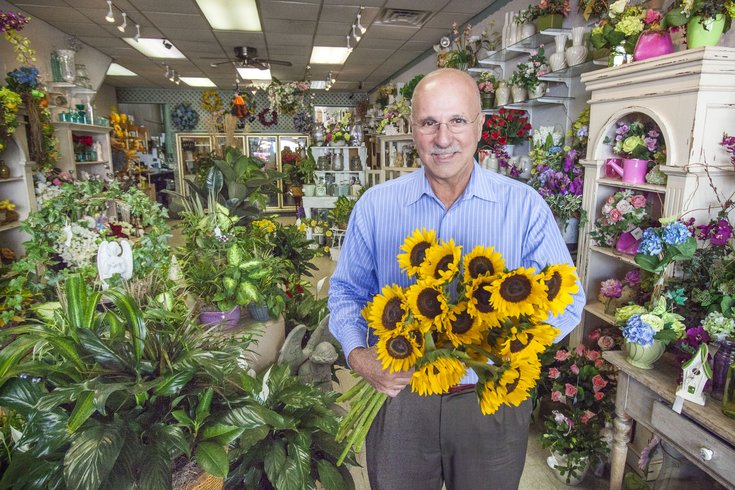 Chris Polites, owner of Polites Florist, in his Upper Darby storefront. “A lot of people ask me, Are you going to move, what are you going to do? But I just really enjoy this area," he says. "I say you have no idea how nice these people are. I have no intention of ever moving.”

When Chris Polites purchased the building at 42 Garrett Road in 1976, the flower shop shared the block with an exclusive women’s dress outlet, a fancy gift shop, a tobacco and pipe store, a Greek restaurant, and a hardware store.

Today, it shares the block with a host of businesses oriented toward Asian and Latino immigrants, including Sabor Latino night club, which advertises “Spirits and Nachos,” plus one of the only Salvadoran pupuserias in the Philadelphia area, and a Peruvian restaurant.

The ethnic businesses have moved in as the Upper Darby neighborhoods closest to Philadelphia have diversified since the beginning of the 1990s, a shift that prompted an exodus of older white-owned businesses and residents. The township went from a white population of 92.5 percent in 1990 to 56.6 percent, the 2010 census shows.

The Garrett Road commercial strip has been entirely transformed in that time, with one exception – Polites Florist. 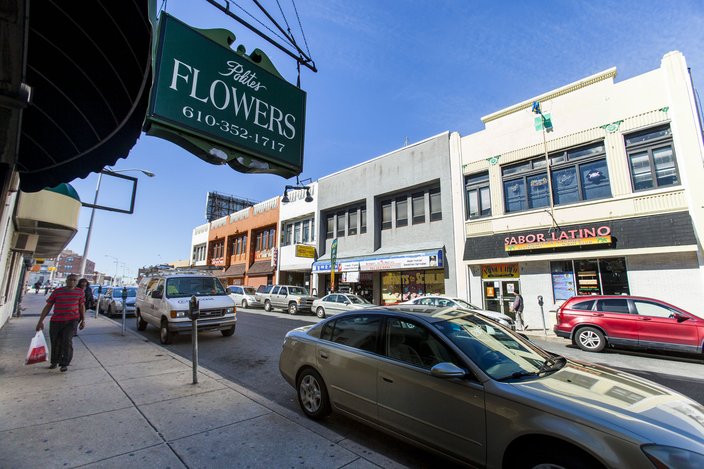 In the 1970s and 1980s, “the demographics were mostly middle class white and slowly but surely that changed,” says Polites, owner of the titular flower shop. “A lot of people ask me are you going to move, what are you going to do? But I just really enjoy this area. …I say you have no idea how nice these people are. I have no intention of ever moving.”

The Polites family has been in the flower business since the beginning of the 20th century. Frank L. Polites, Chris' grandfather, arrived in the United States in 1887 at the age of 13, coming from Sparta, Greece, by way of Cherbourg, France. He eventually settled in Philadelphia, and tried his hand at a variety of businesses – including a number of restaurants that were all ruined by the Great Depression – and engaged in the floral trade in Center City.

He even knew John Wanamaker during the peak of the department store tycoon’s empire, and the great man himself asked Polites to open a flower stand in the flagship store downtown on east Market Street. It only lasted a few weeks though, as liability issues surfaced when customers started slipping on the water that periodically pooled around the kiosk.

"I frequent the stores around here and try to support them....The people are nice and they are all doing the same thing – living the American dream.” – Chris Polites, flower shop owner, on his Garrett Road neighbors

Polites opened up a little shop in the 69th Street Terminal in 1908, a year after the Market-Frankford line opened. Back then Upper Darby barely existed and 69th Street was an aspirational name: The train ended among farmland, Garrett Road was made of dirt, and the only business was Vanleer E. Bond’s hay and feed store. But in the decade before the Depression, the flower business thrived as Upper Darby became one of the first booming American suburbs, growing from 8,956 people in 1920 to 46,626 in 1930, a decade in which it was dubbed “the fastest-growing community in the world.”

When Frank Polites died in 1940, the business was taken over by his son, who had grown up in Upper Darby and still remembers selling flowers to commuters in the 69th Street Terminal as a little boy. (He also remembers when the H-Mart, a two-level Korean grocery store and cafeteria, was the Chazvou skating rink.)

After joining the family business in 1975, Chris Polites expanded to five stores across the region. Then he became involved with Gerald Stevens, a roll-up company started by Blockbuster alums meant to do to florists what the video store chain did to mom-and-pop video rental shops. Polites joined the company with enthusiasm, merging his shops with the expanding Gerald Stevens chain and getting himself hired. They eventually made him the regional director for Canada.

But Gerald Stevens went bankrupt in the Dotcom crash, and Polites sold his stock for 12 cents a share and went back to being an independent florist in the early 2000s. He only maintained his shops in Springfield and Upper Darby.

In the meantime Garrett Road, and Upper Darby, had changed dramatically. There was an initial period of resistance to African Americans moving into the township in the 1970s and 1980s, when the houses of newly arrived people of color were periodically vandalized by mobs. But over the course of the 1990s, immigrants from Asia, Latin America and Africa, as well as African Americans from West Philadelphia, transformed the racial composition of the neighborhoods closest to the city and the fading Art Deco shopping district around Polites’ flower shop.

“I don’t think [any of the original businesses are left]. The last guy was the printer 14 years ago and then he sold to the guy who does the dumplings,” says Polites. “I was affected [by the demographic change], the walk-in traffic slowed down. It was a real big lull.” 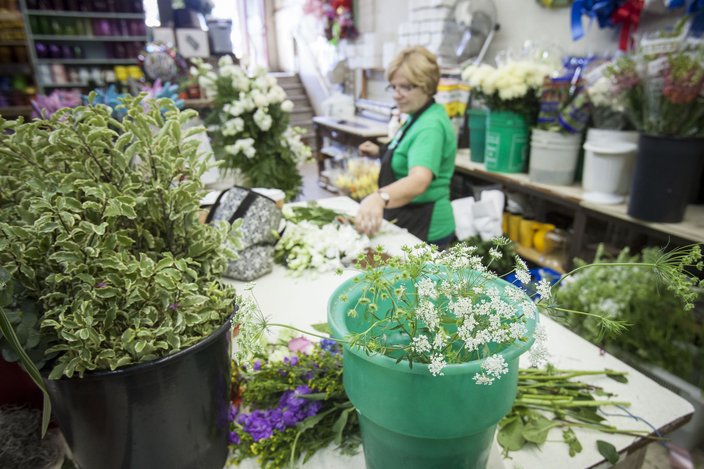 During that downturn, Polites survived by delivering everything from single bouquets to enormous orders for weddings, funerals, and other life events to his old customers, many of whom had moved farther west in Delaware County.

But the shop stayed put and, eventually, business came roaring back.

“People come in who I can’t understand, but they point to [what they want in my refrigerator],” says Polites. “We have Latinos, Koreans, Chinese coming in here, and Africans from Africa who speak English better than I do, speaking King’s English. The black community supports me very well here. Flowers are universal; they all go for flowers.”

Polites moved to a fixer-upper in the Drexel Hill section of Upper Darby in 1980, but 10 years later as his family continued to grow – he and his wife have four children – he looked westward. He now lives in Berwyn, Chester County, on the Main Line, about eight miles from Upper Darby. But he still cheerleads for the township.

“I’ll take my wife, some friends, I say come on down here, I know some restaurants,” says Polites. “People don’t even know. I frequent the stores around here and try to support them. I’ve heard their stories and I’ve told them similar stories about how my family came in the 1800s. They get a kick out of it.

"The people are nice and they are all doing the same thing – living the American dream.”