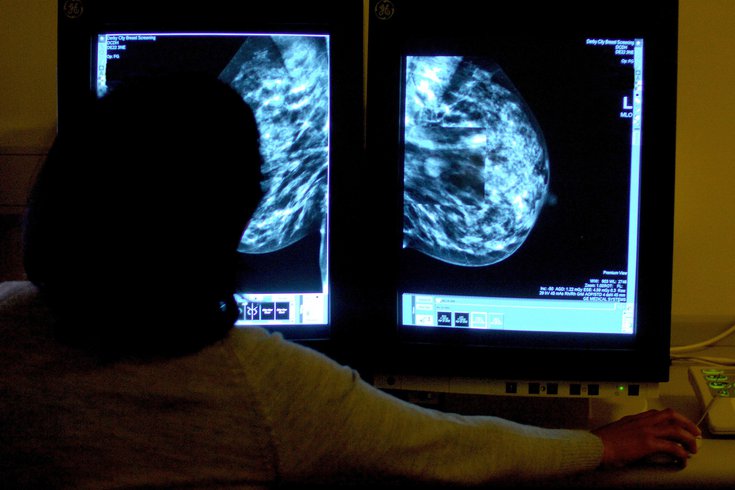 A consultant checks a mammogram for signs of cancer. Despite overall cancer rates trending down, occurrence of breast, prostate and kidney cancer continues to climb.

U.S. cancer mortality rates continued to decline across all Americans whatever their age, gender or racial and ethnic group from 2015 to 2019, according to a new federal report.

Cancer deaths have been gradually declining for more than 20 years now as improvements have been made in prevention, detection and treatment, according to the American Cancer Society.

This year's Annual Report to the Nation on the Status of Cancer also shows that new cases of cancer have remained stable for men and children, but slightly increased for women, adolescents and young adults from 2014 to 2018.

President Biden has been pushing for improvements in cancer treatments through his Cancer Moonshot Initiative since his days as vice president. His goal is to reduce the death rate from cancer by at least 50% over the next 25 years.

Diagnoses of prostate cancer at advanced stages, in particular, has been increasing by 4-6% every year. The rise of many obesity-related cancers such as pancreas, uterus and kidney cancers are also a concern, U.S. health officials say.

There were also racial and ethnic disparities in incidence and death rates for many individual types of cancer.

For example, the report notes that from 2014 to 2018, incidence rates for bladder cancer declined in white, Black, Asian/Pacific Islander and Hispanic men, but increased among American Indian/Alaska Native men. Incidence rates for uterine cancer increased among women of every racial and ethnic group from 2014 to 2018 except for white women, whose rates remained stable.

In addition, while from 2015 to 2019 prostate cancer death rates were stable among white and Black men, they decreased among Asian/Pacific Islander, American Indian/Alaska Native and Hispanic men. Colorectal cancer death rates were stable among American Indian/Alaska Native men but decreased in men of all other racial and ethnic groups, the researchers also found.

Death rates for breast cancer also remained stable among Asian/Pacific Islander women and increased among American Indian/Alaska Native women despite the decline in deaths among other women. Also, colorectal cancer deaths among American Indian/Alaska Native women remained stable while they decreased in other racial and ethnic groups.

Dr. Lisa C. Richardson, director of Centers for Disease Control and Prevention's Division of Cancer Prevention and Control, told UPI that it is "concerning" that these disparities continue to exist despite improvements in cancer outcomes. She said continued efforts that go beyond the health care system are needed because many different factors can influence cancer outcomes, including availability of healthy, affordable food in neighborhoods and safe places to exercise.

She said the CDC and the National Cancer Institute are working with other public health agencies on strategies to reduce disparities in cancer outcomes, including making cancer screenings more easily accessible and improving access to clinical services in medically underserved communities.

Overall from 2015 to 2019, cancer death rates decreased by 2.1% per year in men and women. The biggest declines in death rates were in lung cancer and melanoma, which declined at a rate of 4% to 5% per year among both men and women. Mortality rates increased, however, for cancers of the pancreas, brain, bones and joints among men, and for cancers of the pancreas and uterus among women.

Cancer incidence rates remained mostly stable in men and women combined from 2014 to 2018, the report also shows. Among men, however, there was an increase in diagnoses of cancers of the pancreas, kidney and testes. The biggest increase was seen in pancreatic cancer, which rose by 1.1% each year. The sharpest decline was in lung cancer cases.

"Pancreatic cancer incidence and survival reflect both the underlying risk of disease as well as the difficulty of diagnosing pancreatic cancer at a treatable stage," said Betsy A. Kohler, executive director of the North American Association of Central Cancer Registries.

"As advancements in screening technology and effective treatments for early-stage disease become available, we are hopeful for greater improvements in pancreatic cancer survival, which historically has been a particularly lethal cancer type."

Among women, incidence rates rose for cancers of the liver, kidney, pancreas, breast, oral cavity and pharynx, as well for melanoma and myeloma. The biggest jump in incidence was seen in melanoma, which climbed 1.8% per year. Meanwhile, the incidence of thyroid cancer among women dropped by 2.9% per year.

Cancer incidence rates were highest among American Indian and Alaska Native people from 2014 to 2018, followed by white and Black people. The rates were lowest among Hispanic Asian/Pacific Islander and Hispanic people.

The number of cancers diagnosed in 2020 during the height of the COVID-19 pandemic are not yet available, but experts predict there will be fewer cases diagnosed due to reduced screening.

The report published in the journal Cancer was a collaboration between the National Cancer Institute, part of the National Institutes of Health, the Centers for Disease Control and Prevention, the American Cancer Society and the North American Association of Central Cancer Registries.