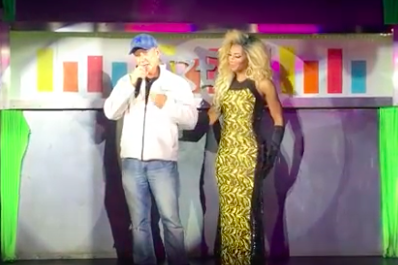 In the aftermath of a scandal that exposed the owner of popular Gayborhood nightclub iCandy, a national celebrity in drag culture has spoken out in defense of his capacity to make amends for the racially offensive comments that surfaced last week in a dated video.

The bar also issued a statement on the incident, reiterating its commitment to an all-inclusive environment free of ridicule and bias.

City officials responded swiftly to the evidently discriminatory views and practices at iCandy, including a thinly veiled ban earlier this year on Timberland boots.

“Consistent with our authority, we are holding a public hearing to provide members of the LGBTQ community a forum to speak about their experiences with racism and discrimination in the community," said Rue Landau, Executive Director of the Philadelphia Commission on Human Relations. "The commission will gather information on bias incidents and discriminatory practices and make necessary recommendations for improved race relations in the LGBTQ community.”

iCandy has remained open for business, even amid protests organized by the Black and Brown Workers Collective.

During a scheduled performance Friday night, American drag star Shangela Laquifa Wadley, a comedian and former contestant on Ru Paul's "Drag Race," took the stage in an effort to "make it right" and encourage change through forgiveness (h/t Mic).

"Some of you may be like, well, s---, why are you here?" Shangela said. "Why are you even here? Are you condoning behavior? Are you supporting it? I'll tell you this first and foremost. Anyone who knows me knows that Shangela is 100 percent for real, OK? I keep it real. I did not appreciate nor support it, but let me tell you something, baby. Opportunities come for change, and tonight we are standing on an opportunity of change."

Despite pressure from friends and fans not perform at iCandy, Shangela said she did not feel right running from a problem or controversy, though she would not judge others for refusing to patronize the club.

With her introduction, DePiano then took the stage to further express his remorse for the remarks and his desire to see positive change in the community.

"I'm not going to run away, as [Shangela] said. I'm going to stand up, take my lickings and hope that we can all make a change, mostly myself," DePiano said. "And help the entire community change as one for equality. I greatly apologize to everybody. It's something that if I could take back 30 seconds of my life, I would take that back."

A public meeting on this and similar incidents will be held Oct. 25.