VIDEO: Redskins fans fight each other during loss to Eagles 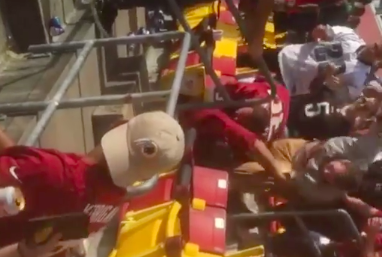 Two Redskins fans fought each other in the stands during the team's loss to the Eagles Sunday afternoon.

During the Redskins' loss to the Eagles at home, a couple Washington fans lost their dignity by engaging in fisticuffs in the stands.

Deadspin unearthed Instagram video of the scrum, which appears to show a man in a grey Redskins jersey punching another man in a red shirt. You can watch it below.

As Deadspin noted, the user who posted the video claimed in the comments that the fight was between two Washington fans and didn't involve any Eagles fans. In the video, you can hear someone saying, "Ya'll teammates, man."

Eagles fans, of course, are not immune to these shenanigans, as a few jabronis threw down in front of a food stand at Lincoln Financial Field during a preseason game this year.

Suggestion: If you paid all that money to see an NFL game in person, do not ruin it by hitting someone.