Video shows man getting knocked out on South Street 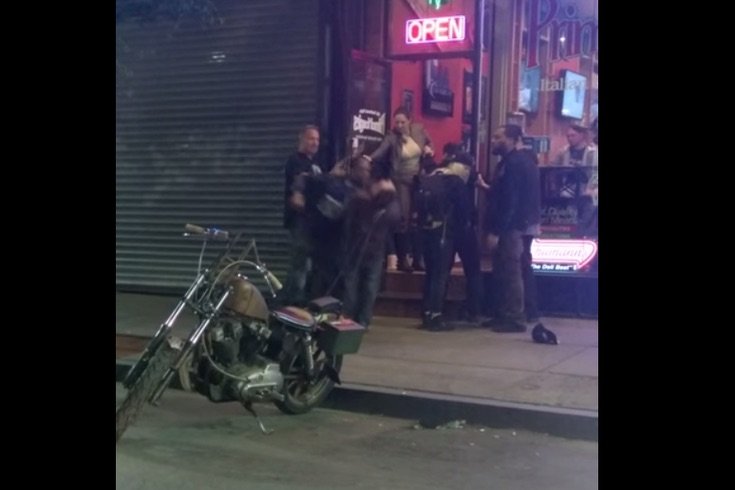 This screenshot is of a video showing a man punching another man on South Street, knocking him to the ground.

In what appears to be a violent and bizarre chain of events, a man was knocked out cold outside a bar on South Street and then a police officer reportedly responding to the altercation was involved in a crash as she headed to the scene.

The video of the fight was recorded outside the Primo Hoagies restaurant at 326 South St. and was posted to YouTube on Tuesday.

As the video begins, a man can be seen lying on the ground next to a group of people near the entrance to the eatery, while another man is angrily cursing at someone in the group.

That man then walks up to the group and punches a man in the face, knocking him to the ground. Another man attempting to break up the altercation tells the others gathered to go inside the restaurant. (Disclaimer: Video contains explicit language and potentially disturbing content):

Eric Giusini originally posted the video to a private Facebook group before uploading it to YouTube on Tuesday morning. He said on Facebook he had called 911. Giusini said the incident happened on a "quiet Monday night."

The video was posted following reports that a police officer had been injured responding to an incident on the 300 block of South Street early Tuesday morning.

Philadelphia police could not confirm on Tuesday morning that Giusini's video showed the incident that prompted the 911 call and led to the arrest of one man.

Police were contacted around 2 a.m. with a report of two people who allegedly had been assaulted. When officers arrived, the suspect fled on foot, leading to a pursuit. The suspect was eventually tracked down and taken into custody without further incident in the 600 block of S. Randolph Street.

The man on the receiving end of the punch was transported to Jefferson Hospital, where he is listed in stable condition.

The police officer in the crash, identified as a 45-year-old woman, was driving along South Street with her lights and sirens on.

Her vehicle collided with a bread delivery truck near 11th Street, and the officer was hospitalized with injuries to her face, head and neck. She is expected to make a full recovery.

Police said the injured officer was responding as backup at the time of the crash and was not in active pursuit of the suspect.

This is the second video in as many days to surface showing a person in Philadelphia being knocked out cold after getting punched in the face. On Monday, PhillyVoice reported on an incident recorded in the 1700 block of Walnut Street that showed a man being hit in the face, falling to the ground and then lying there motionless.