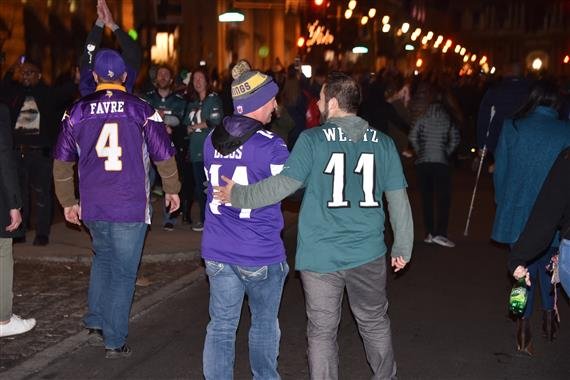 The dust has settled on the Eagles' blazing 38-7 victory over the Minnesota Vikings in Sunday night's NFC Championship game.

We've laughed at and with the man whose passion sent him charging into a SEPTA pillar. We've compiled the best celebrity reactions, applauded ourselves for a relatively crime-free celebration and reveled in the glory of Nick Foles picking apart what was held up as the league's best defense.

It's clearly time to move on to the New England Patriots and Super Bowl LII, but the awkward irony of Minnesota's crushing defeat is that the big game will be played in the Vikings' shiny new Minneapolis stadium, where this is happening.

The city of Philadelphia has taken heat from Minnesotans over the past few days — and rightfully so — for the hostile and threatening behavior some fans displayed outside Lincoln Financial Field on Sunday.

There will unfortunately always be football fans who take things too far. A few Vikings fans even came up with this totally well-thought-out idea to become Uber drivers and drop Eagles fans off at random rural locations.

I'm signing up to be an Uber Driver just for the Super Bowl. It'll be fun dropping off Eagles fans in random wrong places. #SKOL

So who wants to become an Uber drive with me JUST for the Super Bowl so we can drop Eagles fans off at entirely wrong places?

This is why the story of a Minnesota woman raising $38,000 for the Eagles Charitable Foundation is so important to highlight.

Jessica Leibrock was home with her family in Farmington, about 30 miles south of Minneapolis, when the Eagles turned a 7-0 deficit into an absolute disaster for the Vikings.

"Nobody wanted to see the season end that way after our miracle win over New Orleans," Leibrock told PhillyVoice. "Then we see the videos of the Eagles fans. That was just driving the knife further."

Leibrock and her husband, Matt, were inspired by Minnesota's philanthropic spirit after the Vikings beat the Saints. Fans donated more than $220,000 to What You Give Will Grow, the pediatric cancer organization founded by Saints punter Thomas Morstead. The punter had shown grit playing through an injury and admirable sportsmanship returning to the field for the formality of an extra point.

"It's crazy to say, but my husband and I are addicted to giving," Leibrock said. "You do something for someone else and it makes you feel better. It's sometimes easier to give and be kind when you're on a high, but what would it be like if the team who really got their butts kicked, like we did, went out and raised money?"

And that's where the idea for the Vikings Brotherly Love GoFundMe campaign took root.

"Yes, Philly kicked us out of Super Bowl contention, but we're welcoming you to the city," Leibrock said. "We don't want the negative side of you to come out here. It's also kind of a coping mechanism for my husband and me."

The campaign's goal of $38,000, a self-owning reference to Sunday's final score, aims to support the Eagles' charitable wing in its ongoing mission to provide vision tests to Philadelphia students and advance local autism research and outreach. Every dollar raised will go directly to the foundation.

For Leibrock, who works in business operations, charitable giving has become a passion. She and her husband recently founded the nonprofit Blessing Trips, which raises money for families in crisis to take vacations. 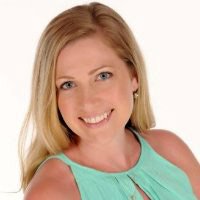 “We should all be more sportsmanlike,” says Jessica Leibrock. “I hope that's the message.”

With the Eagles campaign, Leibrock has been heartened to see such positivity in the comments and from those who have already donated thousands of dollars. Dozens of Eagles fans have written to express their gratitude and offer apologies on behalf of those relative few who continue to give the city a bad name.

One commenter perfectly described the perception Eagles fans have developed among the NFL community at large.

"This behavior may be coming from a minority of fans, but it seems the Eagles just may have the NFL’s largest minority of such fans."

In fact, some Philly commenters have complained that Leibrock's campaign is just sour grapes. They've passed along instances of poor behavior from Vikings fans just to make one point while missing another.

In the future, Leibrock dreams campaigns like hers might inspire fans to show their competitive spirit through giving.

"What if we channel the passion we put into sports for good?" she wondered. "Who's going to win in terms of giving? You could give to your own city's cause or give to the other side out of sportsmanship. Why not spread the love?"

The sting of that 38-7 loss will hurt for a long time, but it's hardly a small consolation that Minnesotans can come together to support a good cause for the Eagles and welcome Philly fans in with Midwestern hospitality.

"I haven't quite decided and said I'm officially cheering for the Eagles," Leibrock joked. "But I want those really good, diehard Eagles fans — so many of them are awesome, classy people — to see their team win a Super Bowl."