Rae-Maria Smith, among many, is ready to immerse herself in the World Meeting of Families 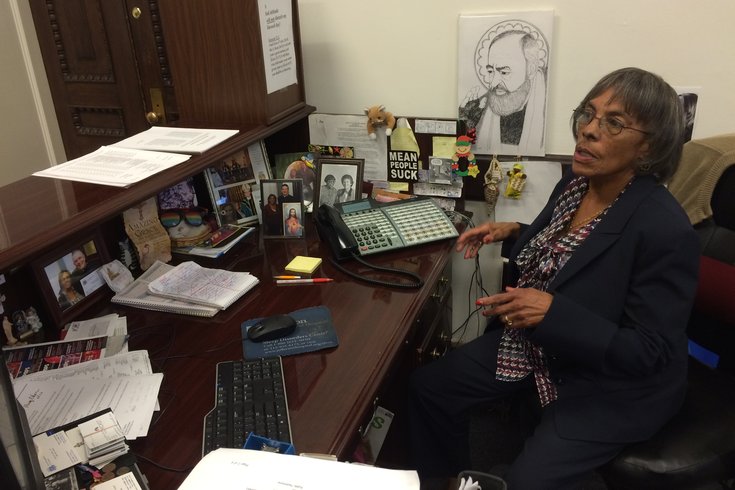 Rae-Maria Smith is joining the thousands volunteering during the papal visit this September.

While the arrival of Pope Francis to Philadelphia is months away, those committed to helping out are already raising their hands to volunteer.

Rae-Maria Smith was among the first.

“It is a chance of a lifetime to be able to be involved in this,” Smith said.

It is the one-time nature of this opportunity that has so many so enthusiastic about what will happen in Philadelphia. Those with a close attachment to the church, like Smith, rushed to volunteer not only to experience the events, but be a part of them.

She is using her vacation time to be one of the 10,000 volunteers needed to make the World Meeting of Families and the Pope’s visit this September run smoothly. Volunteer registration officially opened on April 27. Organizers convinced Smith and others who were clamoring to participate to wait until then to sign on.

And was there a rush to do so. Sign-ups were so popular that even though Smith logged in the day registration opened, she ended up on the wait list for the two events she wanted: helping guests at the Convention Center and assembling "Pilgrim kits" for those attending the World Meeting of Families. Eventually, a spot opened up.

Smith, 69, is an administrative aide in the office of the City Council president. Her desk in City Hall merges two major parts of her life -- her work and her faith. Last week, she pointed to pictures of crosses, religious quotes and pictures that over the years have filled her workspace. They remind her of the church and her parish, St. Ignatius, where she has been involved more or less since she was a kid.

For her, religion is something to showcase, not hide. When people ask how she is doing, she doesn’t say she is doing well, she says “I’m blessed.”

It can also come through in the form of a bit of tough love. When people complain about aches or pains, she preaches their fortunes. “I say, ‘yep, maybe, but at least you are here to feel it.’”

As a city employee, she said she was proud of Philadelphia for attracting the World Meeting of Families -- it has never taken place in the United States before. Pope Francis will be visiting the United States for the first time during the meeting and hold a papal mass on Benjamin Franklin Parkway, Sunday, Sept. 27. The combination of these rare events is what makes volunteering in them so important for Smith personally.

“I wanted to find a way to give back what I have been given,” she said. She planned to go to Rome to see the pope, but now she said she won’t have to spend the money.

She said it was also important for her to take part as a way to honor family members who have died.

“I have no siblings and my family members have all passed on, so I am pretty much a party of one,” Smith said. “I honor them by being able to do these kind of things.”

Pope Francis is cheered by faithful as he arrives for an audience with members of the Italian Christian Workers Association in the Paul VI Hall, at the Vatican, Saturday, May 23, 2015. Gregorio Borgia/Associated Press

Each volunteer has to pass a background check that takes a day or two to complete. After that is done, they can sign up for events.

Smith said her volunteer position with guest services played to her strengths as an organizer; she will be responsible for verifying credentials and escorting people to where they need to be in the convention center.

“I will be able to assist folks with whatever it is they need,” Smith said.

She didn’t try to overbook herself, however, because she also wants to take part in some of the events that will be going on that week. She said she would prioritize seeing Scott Hahn, an author of several books on Catholicism and worship.

During a press conference in April to announce the opening of volunteer registration, Donna Farrell, the executive director of the World Meeting of Families, said she was amazed by the initial interest.

“You would think the number one question would be, 'Can I see the pope?'" Farrell said at the press conference. "It's not. It's 'What do you need? How can I help?' I get overwhelmed by the number of people who say they want to be part of this.”

Farrell could have been directly referring to Smith and her anticipation to be fully immersed with the week.

In preparation for September, she receives regular updates from organizers.

“I’ve already given my shirt size for the (volunteer) uniforms,” she said.