Pope coming to Philly? What an Irish priest wants you to know 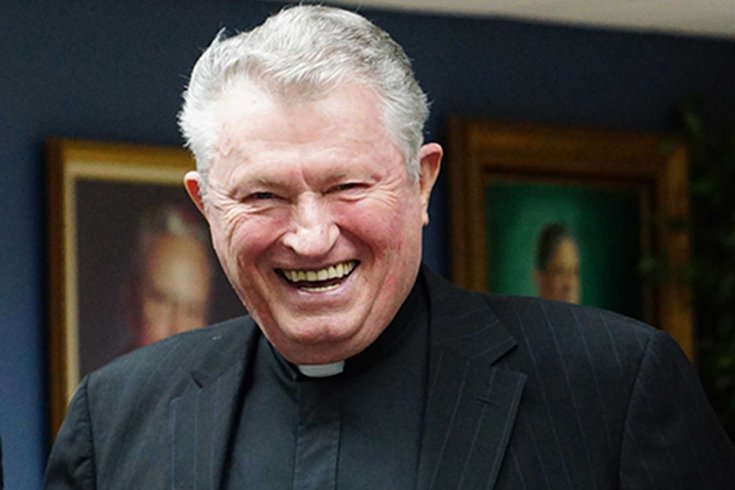 As Philadelphia’s civic and religious leaders prepare for one of the highest-profile events ever for the region – Pope Francis’ first visit to the United States – a plain-spoken Irish priest in South Miami has some advice.

Monsignor Jude O’Doherty was pastor of Church of the Epiphany in Miami when he was tapped to oversee Pope John Paul II’s historic 1987 visit to South Florida, which included a meeting with President Ronald Reagan.

The logistics for the two-day stay by the charismatic pontiff, which included a motorcade down Biscayne Boulevard and an outdoor Mass at Tamiami Park that attracted an estimated half million people, were daunting. Catholic leaders in the area decided they need a coordinator with the campaign skills and steely gaze of an Army general and the blarney charm of a native of Miltown Malbay-Co. Clare, Ireland.

So they turned to O’Doherty, AKA Father Rambo, the nickname affectionally given to him by city officials for his ability to get things done no matter the obstacle.

RELATED STORY: Meet who's behind welcoming the Pope to Philly

PhillyVoice caught up with O’Doherty in Florida, where he remains the head of the Epiphany Church, and asked what advice he would give Philadelphia officials who have roughly nine months to prepare for a visit from a pope who is known to do the unexpected.

“I wouldn’t do an outdoor event if I could avoid it,” he said. “Weather affected us and we were washed out (at one point.) There’s an enormous amount of work to prepare an outside site: bathrooms, stages, speakers and PA systems. It was an enormous undertaking.”

The Philadelphia archdiocese has already said there will be two public, outdoor events  – the Festival of Families and a papal Mass - on the Parkway.

His suggestion: if a public Mass is in the works, hold it at a football stadium. “I would go for Lincoln Financial Field immediately,” he said, recommending basketball arenas for smaller gatherings. It is unknown right now if the Eagles will have a home game that weekend.

Much of the pope’s itinerary will be scripted from Rome, but with Pope Francis he is likely “to get off the popemobile to meet random strangers in the street, O’Doherty said. “He won’t hesitate to do that in downtown Philadelphia or in the poorer areas of the city.”

And if you are lucky enough to meet the pontiff?

“You can address him as Your Holiness and shake his hand,” he said. “On a personal level I did meet with Pope (John Paul II) and genuflected and kissed the ring. That’s the thing you did years ago. But Pope Francis isn’t going to care what you do, if you genuflect or kiss his ring as much as shaking his hand. He’s going to be glad he met you.”

While no announcement has been made on Pope Francis’ exact plans, some expect he will meet with other religious leaders in the area, as other popes have done. During the Miami visit, O’Doherty said John Paul II “met with the Jewish community one morning for an hour or two and it was a very good event. The invitation went out from the Archdiocese of Miami and a group of rabbis coordinated the visit.”

Miami had two years to get ready; Philadelphia has nine months. Is that enough time?  “I don’t think (the two years) was necessary. It can be done in months rather than years,” O’Doherty said.

“It’s really going to be a special moment for the state and the city of Philadelphia. I would only make sure the pope feels welcomed and that everyone should be made to feel welcomed to meet the pope.

“And keep the preparations simpler rather than more complicated. It’s easy to make a statement like that. If the president comes, it won’t be so simple to coordinate that. (For Reagan’s visit) we weren’t sure if he was coming. You never know until the end. Before (Reagan) arrived we got all sorts of notices ‘we’re studying it, we’re thinking about it.’”

O’Doherty had “less than a month” before the White House officially announced the meeting between the president and the pope was on. It’s unknown if President Obama will meet with Pope Francis in Philadelphia. The two first met last March in the Vatican, where they avoided controversial topics such as birth control, and focused instead on the suffering of the poor, strife in the Middle East and reducing global conflicts.

Any other piece of advice for organizers?

“If you’re going to have a parade I would keep it shorter rather than longer," O'Doherty said. "If you have a very long parade there’s a lot of preparation and it can show there’s not as many people as you might expect.”

During a 1979 visit to Chicago, for example, John Paul’s televised motorcade showed several blocks with sparse attendance. “A shorter route will have thousands of people which will look like millions,” O’Doherty said.

Two years ago, the Archdiocese of Miami held a special Mass to commemorate the 25th anniversary of Pope John Paul’s visit and to honor the organizers, including O’Doherty. To this day, he says he still doesn’t know why he was recruited for the job. “I have no idea in the world. We never know why we’re selected for certain things.”

But he knows about his reputation right? The Father Rambo nickname?