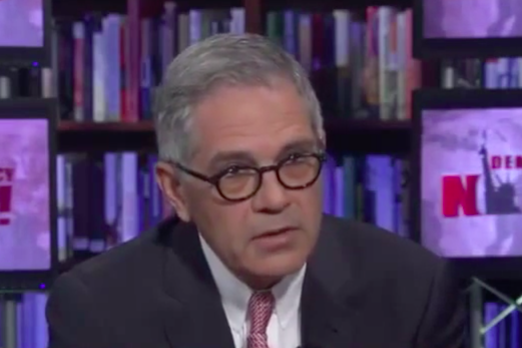 Longtime defense attorney Larry Krasner won last month's primary election for district attorney in Philadelphia by a wide margin, a surprise to some who viewed his background opposing prosecutors as a potential hangup for voters.

Amid Seth Williams' unraveling tenure in the face of corruption charges, Krasner's progressive platform struck a chord with the city's predominantly Democratic base. Supporters backed Krasner as a change candidate, a new breed of prosecutor who could restore order to the district attorney's office while also introducing reforms to address systemic issues that reach beyond the criminal justice system.

Philadelphia's municipal elections will be held Nov. 7, and Krasner is heavily favored against Republican challenger Beth Grossman. The Democratic candidate recently sat down for an interview with "Democracy Now!" to discuss his primary victory and his vision as the presumptive district attorney of Philadelphia.

"I have spent 30 years being in criminal court four to five days a week, and I've been watching what I view as a slow-motion car crash for all that time," Krasner told hosts Amy Goodman and Juan Gonzalez. "We have more and more people in jail all the time, and yet the rate of poverty, the rate of infant mortality, the rate of suffering, in many ways, doesn't get better and we don't get safer."

Asked about the state of Philadelphia's stop-and-frisk program, a policy endorsed by President Donald Trump, Krasner said it succeeds only in "alienating people" and reminding them that in certain neighborhoods, police will do whatever they want, even if it means violating the Constitution.

"This is the destruction of intelligence-based policing, in which information is actually shared," Krasner said. "This is the genesis of the don't snitch culture."

A pair of reports filed in federal court last month, one by the city and one by a group of civil rights attorneys, presented contradictory findings on racial data from stop-and-frisk incidents in the second half of 2016. While African-Americans make up 46 percent of the city’s population, the civil attorneys found, they accounted for 70 percent of those stopped during that time period.

In the city's report, conducted by Temple University professor Ralph Taylor, Philadelphia police recorded 35 percent fewer pedestrian stops in 2016 than in 2015, though there was an increase in stops based on reasonable suspicion. The report claimed there were "no statistically significant differences in the rates at which Black and non-Hispanic White pedestrians are stopped,” finding that Hispanic pedestrians were stopped at lower rates than non-Hispanic whites.

Just as the reports went public, activists challenged and protested Philadelphia police over the practice of searching the underwear of black men during traffic and pedestrian stops.

Krasner criticized stop-and-frisk as a policy with very low odds of turning up criminal possession or drugs and weapons, with the unintended consequence of instilling distrust in otherwise law-abiding communities. Philadelphia is in the midst of a surge in violence, which is up 24 percent, with 136 homicides by June 2017 compared to 110 at the same point in 2016.

How Krasner relates to the Philadelphia Police Department and its union, which endorsed opponent Rich Negrin in the primary, will be a crucial factor in his success as district attorney.

"The problem is not the rank-and-file police in Philadelphia, many of whom are very good people," Krasner said. "The problem is that the leadership of the FOP, unfortunately in the campaign, engaged in rhetoric that was very much Frank Rizzo-era throwback rhetoric."

Ultimately, Krasner explained, he wants to break from the tradition of Pennsylvania prosecutors, like Williams and Kathleen Kane, who he believes were more concerned with running for higher office than pursuing justice.

"Unfortunately, for as long as I have been practicing ... the people who have become district attorneys in Philadelphia County have been politicians," Krasner said. "And ultimately, their goal was not to stop in the district attorney's office. It was to become governor, or to become senator, whatever it may be. It goes all the way back to Arlen Specter, Ed Rendell, Lynne Abraham and now Seth Williams. It's not surprising to me that they end up embroiled in corruption scandals because the truth is they're mostly running for higher office. It has been, to a very large extent, an exercise of ego."