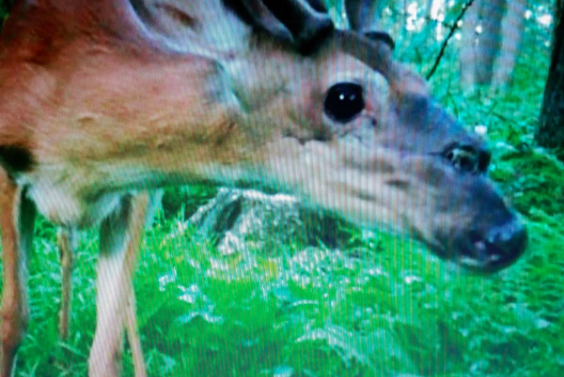 The great John Keats famously wrote that the poetry of earth is never dead. Long before him, Aristotle taught that in all things nature there is something of the marvelous.

Guys, what is up with this white-tail deer that has two noses?

Over the weekend, U.S. Department of Justice employee Pat Rodeheaver checked out the footage from a trail camera he set up on his property in East Drumore Township in Lancaster County. According to Lancaster Online, Rodeheaver is a hunter who rigs his camera every spring and summer to get a preview of potential bucks for the fall season.

This is what Rodeheaver saw on Saturday (best viewed on full-screen).

Dr. Justin Brown, a wildlife veterinarian for the Pennsylvania Game Commission, suggested the deer likely sustained a severe injury to its muzzle at some point. While he described the second nose as an exposed nasal passage, it looks an awful lot like it's just a second nose. It could also be a deformity.

Things like this, while rare, do happen in all forms of life. Let's not forget about old Toby Two-Nose out in California.

As for Rodeheaver, he says he would not shoot the deer if it happens to cross his path this fall. If it survived one gunshot, he figures that's probably enough.