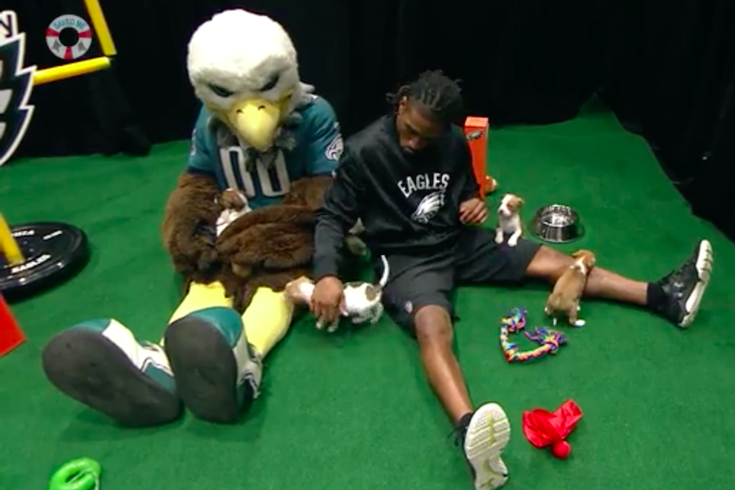 Eagles cornerback Ron Brooks, right, and Swoop have some fun with puppies.

Thursday is National Puppy Day – apparently that's different than National Dog Day but, hey, I'm not going to complain about an extra day to celebrate puppies – and the Philadelphia Eagles decided to celebrate in a way that wasn't only adorable, but was also for a good cause.

With the 2017 Puppy Bowl in the rearview, and the NFL Draft rapidly approaching, the Eagles teamed up with the Pennsylvania Society for the Prevention of Cruelty to Animals (PSPCA) and Saved Me Animal Rescue to host a "Puppy Pro-Day." No word yet on how many scouts were in attendance, but throughout much of the nearly two-hour live stream, cornerback Ron Brooks and mascot Swoop helped the pups run through some drills. (It also looks like another Eagles player stops by earlier on, but I'm not entirely sure.)

The video is sure to brighten your day, unless you hate puppies. And if you do, two questions: Why are you even reading this post in the first place? And, more importantly, what kind of monster doesn't like puppies?

For everyone else (and I hope that's all of you), here's the full video the Eagles posted to Facebook earlier on Thursday.

And given that it already has over 115K views, it seems as though the Eagles "Puppy Pro-Day" was a success in helping raise awareness for the PSPCA and Saved Me.

Carson Wentz couldn't be on hand to throw any passes, but he did share some puppy-love of his own:

I want to thank @Gunner_Kennels on #nationalpuppyday for helping me keep my pups safe and comfortable during our adventures! #Henley #Jersey pic.twitter.com/pZzvi4GCZk

On a related athletes-playing-with-puppies note, I feel obligate to share this video posted by the Houston Rockets.