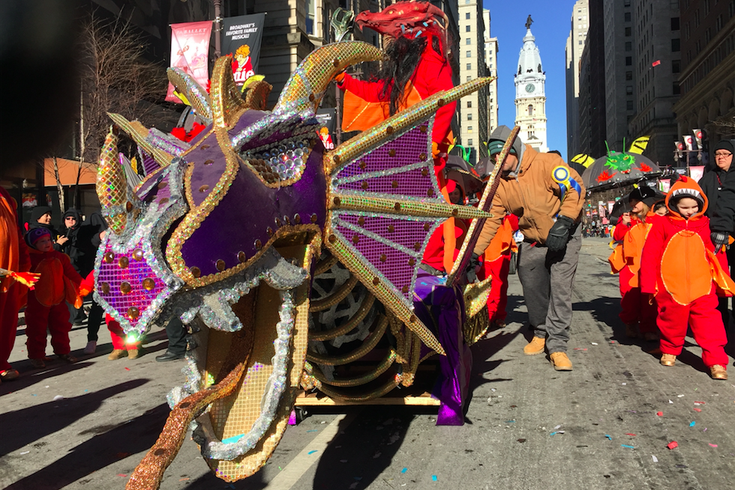 Santino Stagliano and the Santino's Dragons brigade took to Broad Street for the Mummers Parade on January 1, 2018. They represented the first-ever special-needs group in parade history.

Mario and Lisa Stagliano were each at a loss for words at the Mummer’s Parade on Monday afternoon. The story explaining why traces back to April 2015 and beyond.

It started when Lisa shared a photo of her then-10-year-old son, Santino, with the caption, “Santino working on his dragon shirts. Autism awareness.”

Suffice it to say, the post had an impact to the point of hundreds of Facebook messages from people who wanted to buy one of those $5 creations. That was the next morning.

Fast forward two and a half years – through a City Council citation, donating proceeds to The Center for Autism, and some unexpected Adam Sandler involvement – and the 13-year-old “Dragon Master” took to the streets with 20 friends.

The path that brought them to Broad Street traces back to last year’s walkthrough at the Pennsylvania Convention Center. Santino’s Dragons, then just an upstart autism-awareness non-profit group, had been asked to accompany the performers into the event.

At a walkthrough, though, Christopher Sferra’s dancing brought the house down, according to the Staglianos and Christopher’s dad, Pat.

One year later, as Katy Perry’s “Firework” blasted through the speakers after a recorded introduction from Eagles broadcaster Merrill Reese, they became the first-ever special-needs children's comic-division group in the 117-year history of the parade.

Sporting red-and-orange costumes and carrying dragon-themed umbrellas, they danced, strutted and celebrated their message of “understanding and inclusion” of people with autism, Down syndrome and other special needs.

Their smiles and laughter made clear that the bitter temperatures didn’t even rise to the level of afterthought.

“What words can I use to describe how this feels?” Mario said. “I don’t even know what to say.”

His inflection said it all: He was overwhelmed by the moment years in the making. So, too, was his wife, Lisa.

“There are no words. I’m just so happy. They’re all just so happy,” she said. “They just wanted to be a part of this, and now they are.”

As Santino and the other children warmed up inside an RV, Lisa said they hope to grow each year and turn Santino’s Dragons into parade regulars.

Their dragon float was even donated from the Fralinger String Band, so the community’s already embraced them, as did the cheering crowds along the sidewalks.

Pat Sferra said it’s meant the world to his 18-year-old son who got the sword-fighting honors after Santino – who stood on a platform in king-dragon mode – told his mother, “That’s for Christopher; he’s that dragon,” just days before the parade. 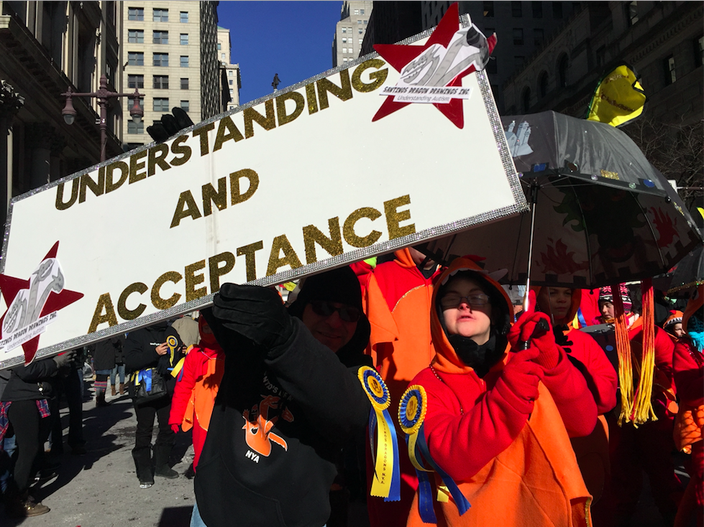 Pat and Christopher Sferra highlight the message of inclusion that Santino's Dragons set out to bring to the 2018 Mummers Parade.

Christopher – who has suffered seven strokes – communicated with laughter, smiles and high fives when told that it was his interviewer’s first parade and his dance at the outset of their skit would be the takeaway memory from the day.


“They took the house down,” his beaming father said.

Since they’re not a formal brigade – yet – they don’t have a clubhouse, which meant after they finished the route, it was off to “Club Stagliano” in South Philly for their party.

On the menu: Soup, roast beef and sausage sandwiches, pizza from the shop around the corner and juice boxes.