Shi Liliang, of China's Quanzhou Shaolin Temple, displayed incredible poise and control with his 125 meter dance across a reservoir. 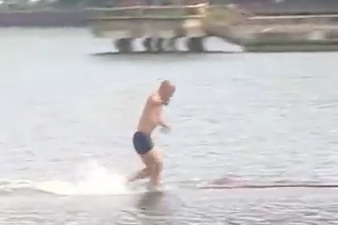 Shi Liliang, a monk who made headlines last year running 118 meters across the surface of a water reservoir, established a new personal best of 125 meters on Aug. 29.

For most of us, it's simply not possible or practical to try running on water at home. If you could, though, there wouldn't be too much risk in it. You would sink, and that would be that.

Monks, however, are a different type of person. They are attuned to hidden knowledge and frequencies that enable them to perform feats, mental and physical, that most of us can't fathom.

Shi Liliang, a monk at Quanzhou Shaolin Temple in southeast China's Fujian Province, has been practicing the art of effectively running on water for at least a decade in an effort to work up to a distance of 125 meters, according to The Spirit Science.

Last week, he broke his previous world record of 118 meters and reached his goal, captured in the video below. Despite the fact that Shi Liliang is running on strips of plywood connected by strips of cloth, this is still an incredible feat. The vast majority of us would collapse within a few steps.

The Shaolin Monastary, known for its acrobatic kung fu monks, is renowned for its rigorous training regimens. The next time you feel that the odds are stacked against you, consider Shi Liliang and the mantra of mind over matter.