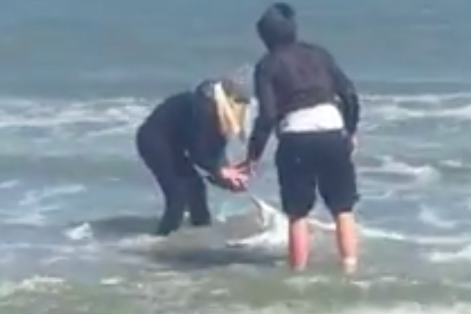 The Wildwood Sun by the Sea Magazine/Facebook

A seasonally chilly March isn't exactly the best time to be wading ankle deep into the Atlantic Ocean, but compassion for desperate animals is as good a reason as any to clench your teeth and cross the shoreline.

A pair of videos that circulated Tuesday morning show several citizens who braved the 40-degree water to rescue a dolphin that became stranded Monday morning near the 15th Street beach in North Wildwood.

The rescue effort began when Nancy Rullo, wife of North Wildwood Councilman Joseph Rullo, and a passerby helped pull the dolphin off the sand and into the water, according to a Facebook post by The Wildwood Sun by the Sea Magazine.

"Nanc said she loves watching shows about dolphins and loves to swim with them when she's on vacation," the magazine's post read. "She could hear the dolphin having a hard time and was talking to her to let her know it was going to be ok."

To finish the job, the North Wildwood Fire Department stepped in with a stretcher to move the dolphin to deeper waters.

Oddly enough, there may have been another dolphin stranded elsewhere at the Jersey Shore on Monday.

"The crazy part of this story is that another girl I follow on (Instagram) posted a video of a dolphin rescue on Stone Harbor point today," the magazine continued. "I wonder if it was the same dolphin? And why it is getting beached?"