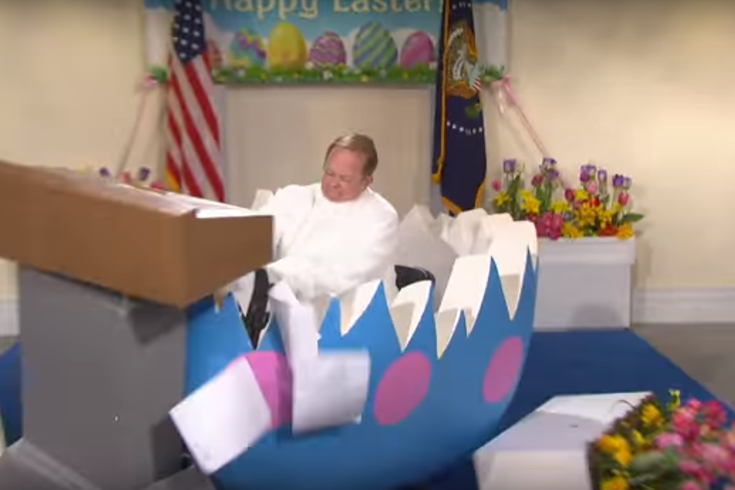 The Donald Trump administration was again in the crosshairs of comedy writers during the latest offering of Saturday Night Live.

The show's cold open began with a meeting between President Trump (played by Baldwin) and Vice President Mike Pence (Beck Bennett) inside the Oval Office as the pair looked back at their first 100 days in office. Trump wanted to take a moment to recount all of his successes, "Read to me again from the list of my accomplishments."

"God, I love that list. What a beautiful, long list," Trump exclaimed before turning to more pressing matters.

Trump needed to settle the reported infighting among his top White House advisers, Chief Strategist Steve Bannon (as the Grim Reaper) and Innovations Director and son-in-law Jared Kushner (Fallon). The meeting played out like a reality show as Trump held one photo of the person who would remain on his staff.

“Jared, you take the most beautiful photos,” Baldwin’s Trump began. “Steve, you take the worst photos I’ve ever seen in my life. I’m not joking. When I see a photo of you, it makes me want to puke.”

“Jared, I’ve sent you all around the world to represent me, but no one’s ever heard you speak. You’re like a little Jewish Amelie,” Baldwin's Trump explained. “Steve, you may be smart, but I once walked in on you eating a live pig in the Roosevelt Room.”

Kushner, who remained silent throughout the skit, was selected and tasked to "fix everything" by Trump.

Later in the show, viewers were rewarded with a special message from the White House and the Easter Bunny courtesy of McCarthy's Spicer.

The sketch immediately addressed the real Spicer's controversial comments about Adolf Hitler this week. The press secretary was discussing Syria President Bashar al-Assad's chemical attack that killed at least 80 people in the country when Spicer noted that Hitler "didn't even sink to using chemical weapons" during World War II.

McCarthy's Spicer offered an apology about the statements, "You all got your wish this week. Spicey finally made a mistake."

The most cringeworthy moment came when McCarthy's Spicer sympathized with Holocaust victims.

“I like you all to know that I am sensitive to the fact that they were sent there on trains. But hey, at least they didn’t have to fly United, am I right?” McCarthy's Spicer said, prompting groans from the studio audience.

McCarthy's Spicer again used toys during the public address to helpfully explain an issue. This week's topic was Passover, "a.k.a. Jewish Easter."