WATCH: Suspect sought in string of thefts of fuel tanks in Northeast Philly 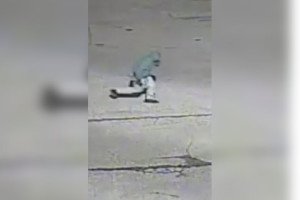 The Philadelphia Police are seeking help to identify this man, who police believe, is responsible for a string of thefts of fuel tanks from businesses throughout Northeast Philly.

Philadelphia police are seeking help from the public to identify a man who, police believe is responsible for a string of thefts of fuel tanks at businesses in the city's Torresdale and Frankford sections, earlier this month.

According to police, the man can be seen on surveillance video, stealing propane and acetylene tanks during at least three incidents, beginning on Dec. 16.

Police said at some time between those hours, the suspect gained entry into the rear yard of James D Morrissey Inc., located in the 4700 block of Pennypack Street, by cutting the chain that secured the gate and then broke into a propane enclosure there.

On Dec. 16 at about 10:24 p.m., police said the same individual could be seen on surveillance video gaining entry to Phax-Air, located on the 2300 block of Church Street, by cutting a hole in the security fence and driving what appeared to be a Dodge Caravan into the yard.

The most recent incident, law enforcement officials said, occurred Dec. 22, at about 1:42 a.m., when two men, operating what police said was a Ford Escape entered an unsecured parking lot of Phax-Air.

Surveillance video shows a man in the front passenger seat exit the vehicle and climb over a 6-foot, razor-topped fence. He then leaves the view of the cameras before returning to the fence.

The man can be seen throwing several propane tanks over the fence, before climbing back over it and loading the tanks into the vehicle. Police said the vehicle then fled in an unknown direction.

In that case, six acetylene tanks – used primarily for welding – were stolen.

Anyone who can help identify the individual, or individuals, involved in these robberies is asked to contact the Philadelphia Police can be contacted at 215-686-8477 or text a tip to 773847.