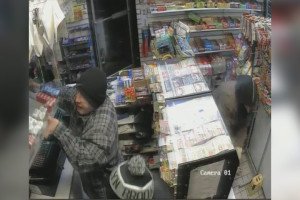 Philadelphia police are seeking help from the public identifying the individuals they believe are responsible for a string of gas station burglaries throughout Northeast Philadelphia.

Philadelphia police are seeking help identifying the individuals responsible for at least seven burglaries that occurred at gas stations throughout Northeast Philadelphia between Jan. 8 and Feb. 16.

Cigarettes were taken in most of the incidents, police said.

WATCH: Surveillance videos taken from several of the incidents:

The first incident occurred on Jan. 8, police said, when a man gained entry to a Lukoil gas station located at 9418 Bustleton Ave. by breaking a garage bay window.

Once inside, law enforcement officials said the individual – described as a male wearing a gray flannel jacket, a dark-colored hooded sweatshirt and white gloves – took several packs of cigarettes before fleeing in an unknown direction.

Police said surveillance video shows him entering and leaving in a dark-colored sedan.

On Jan. 28, a man attempted to gain entry to an Exxon gas station located at 355 Franklin Mills Circle by backing a truck into a glass door, police said. After the failed attempt at gaining entry, the male suspect fled in an unknown direction.

On Feb. 10, at about 3:50 a.m., three men broke a side window to again enter the Lukoil gas station at 9418 Bustleton Ave. and steal several packs of cigarettes before fleeing in an unknown direction, police said.

One suspect is described as being between 28 to 35 years old and wearing a gray plaid jacket and a black hat. The second suspect was wearing a black coat and a knit hat with the word “Brooklyn” on it, and the third male, police said, wore a black hooded sweatshirt, tan coat and white gloves.

Two days later, on Feb. 12, a man gained entry to a BP Gas Station located at 9998 Frankford Ave. by breaking a front glass window, police said. Once inside, the man took several packs of cigarettes before fleeing in an unknown direction in a tan car with a sunroof, police said.

Investigators said the suspect in this incident as a white male, 28 to 35 years old, wearing a plaid jacket, light-colored hooded sweatshirt, blue jeans and dark-colored gloves.

In the next incident an individual entered the Shell Gas Station, 9801 Bustleton Ave., sometime between midnight and 6 a.m. on Valentine's Day, by breaking the glass front door, police said.

Police provided no details about the suspect in this incident and said it was unknown if anything was taken.

Between midnight and 7 a.m. on Feb. 15, an individual broke a rear glass door at that same gas station and took several packs of cigarettes before fleeing. Police did not provide details about this suspect.

In the most recent incident, at 7:10 a.m. on Tuesday, Feb. 16, a man gained entry to the Philly Stop & Shop at 2800 Willits Road by shattering the glass front door.

Once inside, police said the suspect took several packs of cigarettes and an unknown amount of cash from the cash register before fleeing in an unknown direction.