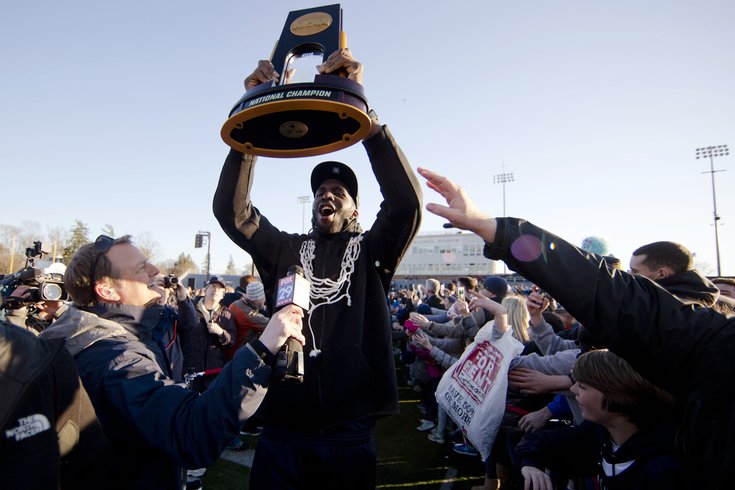 Less than 24 hours after winning their first title in 31 years, the Villanova Wildcats returned to campus on Tuesday afternoon as a few thousand fans packed into their football stadium to welcome coach Jay Wright and his team home.

The crowd at Villanova Stadium waiting for the Wildcats to arrive. pic.twitter.com/omH4ABHO6S

The scoreboard at @VillanovaU waiting for the national champs to arrive... pic.twitter.com/Jlq0lM782E

But the homecoming party actually started when they landed at Philadelphia International Airport.

Thank you everyone who came out to the airport to welcome us home! pic.twitter.com/BCVNQzZrLd

They then received a police escort down I-95 and I-476 as to not keep the fans waiting in to cold too long.

And when the team finally arrived on campus, it was bedlam.

The champs are home. pic.twitter.com/xzwwyY1gMD

Jay Wright returns home to @VillanovaU after winning the title. (And yes, I left him hanging...) pic.twitter.com/LQXDwiNAX4

After the big welcome, Wright took to the stage to thank NovaNation for their support all season before introducing some of the players -- including captains Ryan Arcidiacono and Daniel Ochefu, as well as Monday night's hero Kris Jenkins.

All in all, it was a well-deserved celebration -- one that will continue on Friday when the Wildcats parade through Philadelphia.

NOVA NATION YOU ARE THE BEST! pic.twitter.com/S60JFnPqaY