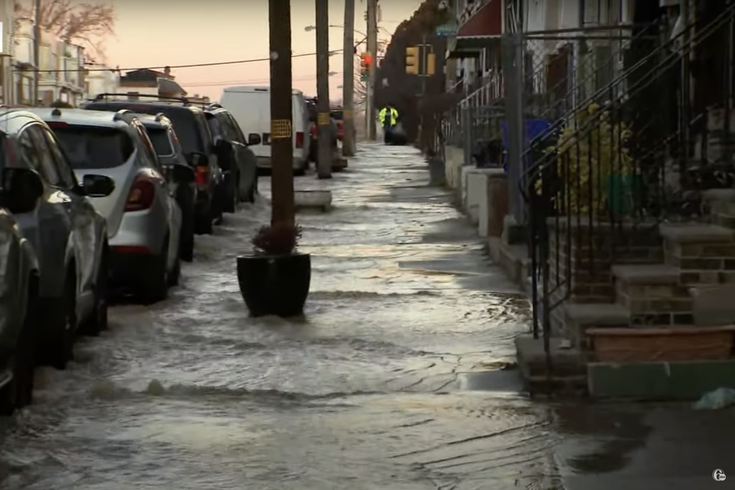 A water main break happened at about 6 a.m. Wednesday at the intersection of 56th Street and Springfield Avenue in the Kingsessing neighborhood of Southwest Philly, fire department officials said.

A 48-inch water main broke Wednesday morning, flooding parts of the Kingsessing neighborhood in Southwest Philly and forcing some residents to evacuate their homes.

The water main break occurred at about 6 a.m. near the intersection of 56th Street and Springfield Avenue, the Philadelphia Fire Department said.

At least three buildings have had to be evacuated, fire officials said. Two people required medical care, and at least five residents have had to be rescued. No injuries have been reported.

Several blocks of Kingsessing could be seen flooded, leaving parked cars stuck and forcing residents to evacuate their homes.

Below is some some of the local coverage of the flooding:

Breaking: massive water main break in SW Phila/Kingsessing - this appears to be the source, flooding a dozen or more blocks, basements and cars near 56/Springfield Ave @NBCPhiladelphia pic.twitter.com/bd0zGR46my

The rate at which the water was flowing began to slow down at around 7:30 a.m., but the break had yet to be completely sealed. Earlier this morning, there was no timeline for when the break would be sealed, and the cause of the water main break remains under investigation.

SEPTA buses have been deployed as shelters for impacted residents. SEPTA shuttle buses were also being offered for Route 13 trolley riders who need to travel around the area, but trolley service has been restored. Delays are still expected.

The 48-inch water main moves thousands of gallons of water, making it one of the largest in the city.