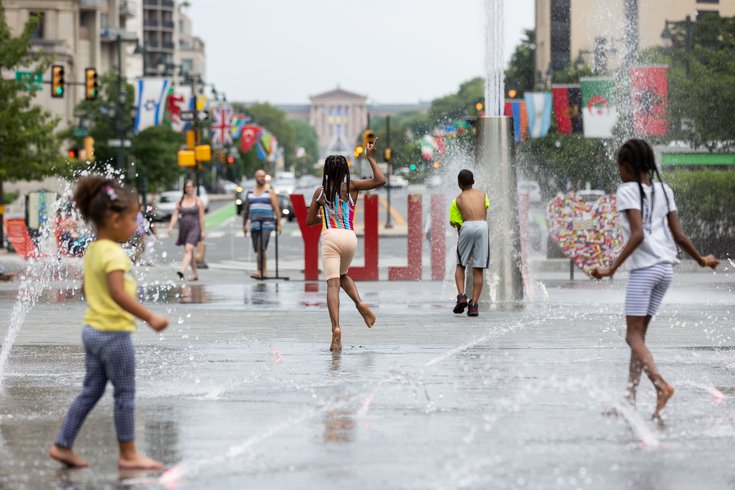 It will be mostly dry in Philly and the Jersey Shore this weekend, but there's a chance for scattered showers. In the city, temperatures will be in the 80s. At the shore, it will be in the upper 70s. Skies should clear by Sunday afternoon. Above, children play in the fountains at Dilworth Park.

We've been really lucky with the weather recently. It started this past weekend and continued all week. Some folks west of the city bottomed out in the lower 50s multiple nights – a real treat this time of the year.

Tomorrow morning will likely see temperatures in the 50s, though it will be more limited as humidity starts coming up again. This weekend will not be as easy as last weekend. There's an offshore system that could bring some rain on Saturday afternoon and Sunday morning, but most of the weekend should be dry.

The best chance for rain looks to be to the east, which means the shore could see some showers. It won't be a washout, but have a backup plan if you're going to be outside. Another offshore system will pass by early next week, which could bring widely scattered showers by Monday.

FRIDAY: Wall to wall sunshine. High pressure keeps us in check. Nice day overall. Humidity starts to rise, but not too much. Highs around 90. A spotty shower can't be ruled out. Chance of rain: 20%.

SATURDAY: Some clouds in the morning, maybe a passing shower in the afternoon. Any wet weather will likely be spotty and disorganized. Best threat of showers will be to the south and east. Highs in the middle 80s. Chance of rain: 40%

SUNDAY: An offshore system will still be close, so a morning shower can't be ruled out. High pressure builds in and skies should brighten up gradually. Highs in the middle 80s. Chance of rain: 30%

FRIDAY: Sunny skies. Great beach weather. The ocean is still a little rough, so watch out for rip currents. Highs in the upper 70s. Chance of rain: 10%

SATURDAY: A storm offshore could bring scattered showers in the afternoon. Most of the day should be dry. Highs in the upper 70s. Chance of rain: 50%

SUNDAY: Lingering clouds and a chance for morning showers. Skies should clear out by late morning or early afternoon. The rest of the day will be pleasant. Highs around 80. Chance of rain: 40%.