Humidity will return this weekend: Hot and sticky in Philly and at the Jersey Shore

There's a chance for scattered storms and showers on Friday, but it should clear up by Saturday afternoon 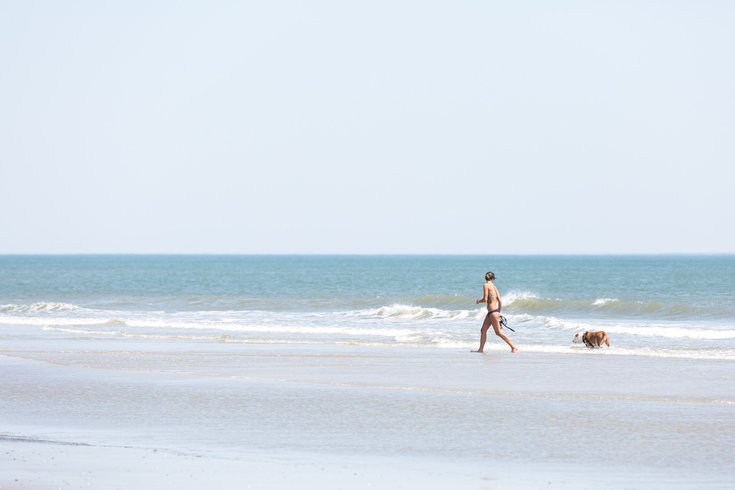 It will be hot and humid in Philly and the Jersey Shore this weekend. There's a chance for scattered storms on Friday and into Saturday morning, but it should clear up by Saturday afternoon. In the city, temperatures will be in the 90s. At the shore, it will be in the lower 80s. Above, a woman walks along the beach in Ventnor City, N.J.

Who out there is excited for the weekend? The weather won't be perfect, but it will be decent for the most part.

We've been lucky with low levels of humidity over the past few days. It's been hot, but not oppressive. As the winds shift out of a more southerly direction, the dew points will begin to climb. By Friday afternoon, dew points will be around 70, which is very sticky. The humidity will hit the shore first, then it will move on to the mainland.

Temperatures will be around 90 away from the beach and in the lower 80s at the shore. The water temperature will climb to around 80 for the first time this season.

There will likely be some scattered showers. Friday afternoon presents the best chance for more widespread showers after 2 p.m. Saturday's chance will be mainly to the southeast of the city, due to a cold front stalling out. The primary concern is torrential downpours. There could be some isolated instances of flash flooding. It's not known exactly where those cells could pop-up, but the chance is on the table between 2 to 8 p.m.

FRIDAY: Starts off sunny with temperatures in the lower 70s. More humid. Clouds build in the afternoon, scattered storms after 2 p.m. Highs around 90. Chance of rain: 60%.

SATURDAY: Chance of a lingering shower. Best probability is to the southeast of the city. Mix of clouds and sun. Highs around 90. Chance of rain: 20%.

SUNDAY: Partly to mainly sunny skies. Dew points in the mid to upper 60s. A little sticky at times. Dry in terms of rain. Highs around 90. Chance of rain: 10%.

FRIDAY: Mostly sunny with clouds likely to build throughout the day. Showers or storms possible in the afternoon or evening. Greatest chance of rain will be west of the parkway. Highs in the lower 80s. Chance of rain: 50%

SATURDAY: Lingering clouds. Chance of a shower. Highs in the lower 80s. Chance of rain: 40%

SUNDAY: Partly sunny skies with highs around 80. Breezy and a little less humid. Chance of rain: 10%.