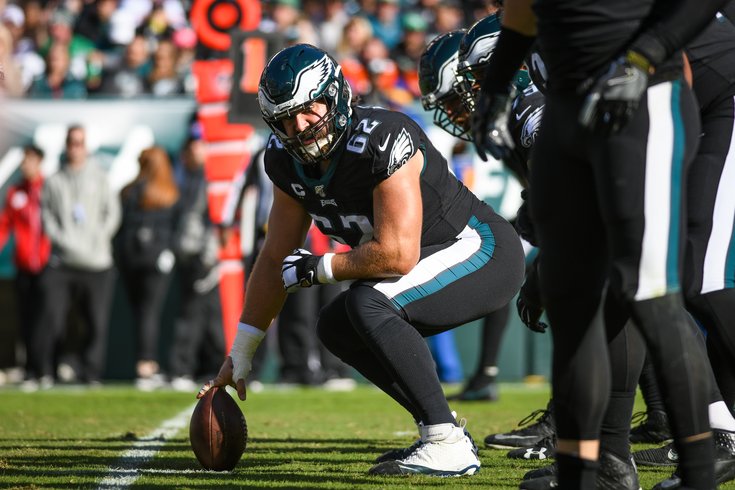 Jason Kelce during the Philadelphia Eagles game against the Chicago Bears at Lincoln Financial Field in Philadelphia on November 3, 2019.

After losing to the Patriots last week, there was a lot of negativity surrounding the Eagles despite the fact that their defense held Tom Brady in check and their offense — without some of its best players (Jordan Howard, Lane Johnson, Alshon Jeffery) was one score away from defeating the Super Bowl champs.

And then as gameday in Week 12 against the Seahawks slowly arrived, there was a little bit of optimism, as fans tried to come to terms with the seemingly bizarre line favoring the Eagles by 3.5 points (it has since gone down to 1.5).

We've already given you some matchups to watch and offered our own predictions for Eagles vs. Seahawks — and we'll have a full injury report later this afternoon. Now, as we do every week, it's time to take a look around the nation to see how various experts, both local and national, see Sunday's game playing out. And you will see as you comb through the picks, there is a good mix of that Eagles optimism amid the slew of NFL experts below...

• PhillyVoice staff: Our writers are fairly one-sided in this one, with five of our six writers picking the Seahawks over the Eagles. Here's a look at what Matt Mullin, who thinks it'll be an epic one-point loss, said:

The Seahawks are the better team in this one, especially if the Eagles continue to be without a healthy Alshon Jeffery and Jordan Howard, particularly the latter. We already know about the Eagles' receivers struggles this season as they've been well documented, but the one way the Eagles have been able to offset that has been by throwing a dangerous rushing attack at their opponents and keeping defenses honest. Obviously, Miles Sanders is still a threat, but he has been at his best as a complement to Howard — and we still don't know what to expect from the recently-signed Jay Ajayi. The Birds could struggle on offense again, although it shouldn't be nearly as bad as it was against the Patriots. In other words, this isn't the Legion of Boom Seahawks defense you remember, but with this Eagles offense, you never know.

On the other side, you have an Eagles defense that has certainly looked better in recent weeks, but they'll be facing their toughest test in weeks against this Seattle offense. In addition to Russell Wilson, they'll have to deal with wideouts Tyler Lockett and D.K. Metcalf, and a running back in Chris Carson who is averaging more than 100 total yards per game (85 of them on the ground). They'll need another stellar performance on Sunday if they hope to knock off Seattle. Unfortunately, I just don't see that happening.

• ESPN staff: In contrast to last week, when everyone picked the Patriots, there are actually three ESPN-ers who are picking the Eagles this week with seven picking Seattle.

The toughest game to pick this week is Part II of Russell Wilson's brutal closing argument to win his first MVP. He's in the midst of four straight games against top-eight defenses (per Football Outsiders measurements) and must close the regular season with a rematch against the 49ers. The Eagles' recent improvements on defense have coincided with the offense further retreating into its shell, reduced to relying on Jordan Matthews like it's 2015. While I want to see the status of Eagles right tackle Lane Johnson and Seahawks wideout Tyler Lockett, I'm always inclined to pick the better offense in a coin-flip game. Carson Wentz is still searching for that signature drive this season, while Wilson pulls one off nearly every week.

• CBSSports.com staff: All of their experts except for Pete Prisco are taking the Seahawks to win. Here is why Prisco isn't one of them:

The Eagles will be playing for their season here, but injuries have crippled this team. The Seahawks are coming off a bye and Russell Wilson is in the MVP conversation. But something says the Eagles will rally here to save their season.

• OddsShark: Last week Oddshark picked the Eagles by five over the Patriots. This week the site is picking them to win by more than five over the Seahawks. Hmm..

Backs-Against-The-Wall Eagles are the best Eagles.

Traveling across the country for an early game won’t be easy for the Seahawks, but I see Russell Wilson having a big game as Seattle earns an important win in the NFC playoff race.

When in doubt, a good rule of thumb is to fade the public. But in this case, our predictors are so perplexed by the roughed-up Philadelphia Eagles being favored against the rested Seattle Seahawks that they're still backing Seattle even though it's attracting more than 80 percent of public bets.

"Three important things happened for Seattle during its bye week," Sobleski said. "First, the team activated tight end Ed Dickson from injured reserve to give the offense a boost. Second, wide receiver Josh Gordon received extra time to work himself into a bigger role. Finally, the extra preparation is always a bonus.

"The Eagles, meanwhile, are coming off a hard-fought loss to the New England Patriots, and they're dinged at right tackle (Lane Johnson has a concussion), wide receiver (both Alshon Jeffrey and Nelson Agholor are nursing injuries) and linebacker (Nigel Bradham has an ankle issue)."

The Seahawks are healthier, especially with top receiver Tyler Lockett back at practice after suffering a scary leg injury before the bye. And while traveling across the country is disadvantageous, they've at least benefited from an extra week off. They crushed the Lions on the road after their 2018 bye, they hammered the Giants away from home after their off week in 2017, and they're a perfect 5-0 on the road this season.

• Sheil Kapadia, The Athletic: Sheil Kapadia, the former Eagles beat writer turned national NFL writer, is now making picks against the spread for every game over at The Athletic. This week, he's taking the Seahawks and questioning the line.

When I tweeted the line out for this game earlier in the week, the most common response from Eagles fans was: “Wait, what? How are we favored?” Fair to say they’re not feeling great about their team right now. By advanced metrics though, these are relatively even teams. Football Outsiders has the Seahawks eighth in DVOA and the Eagles 10th. I think this will be a close game, but if I have to pick a side to make a play in the final two minutes, it’s Seattle.

• SBNation staff: Eight of their 10 experts are picking the Seahawks over the Eagles in this one.

• Bleeding Green Nation staff: Finally, some faith in the Eagles. It comes from the hometown Philly site BGN, so take it for what it's wroth, but six of nine writers are picking the home team in Week 12.

• Inquirer.com: Three of their four beat writers are picking the Seahawks to beat the Eagles, with the lone exception being EJ Smith, who sees a 28-24 win for the Birds.

There are many reasons to be wary of picking the Eagles this week. The Seattle Seahawks have emerged as one of the best teams in the NFC so far this season, Russel Wilson is an MVP candidate, and the Eagles offense has major concerns right now. Maybe a scrappy Eagles team trying to remain in playoff contention can outmatch Seattle’s intensity?

It’s possible, but the Seahawks are still chasing the 9-1 San Francisco 49ers in the NFC West and are fresh off a bye week. It’s not like they’re coming into Lincoln Financial Field resting on their laurels and arranging February flights to Miami. What about the early East Coast kickoff time? Perhaps Wilson and Pete Carroll’s thrown-off body clocks will hinder their success. It could happen, but it hasn’t yet this season.

The Seahawks have gone 3-0 this season playing the early time slot. But, those three games have all been somewhat underwhelming performances for the ‘Hawks. Seattle has wins against the 5-5 Steelers, 4-6 Browns, and 3-7 Falcons by an average margin of 4.3 points. Maybe picking the Eagles is a bit foolish. Their pass rush will be largely neutralized by Russell Wilson and they’re still missing some key pieces on offense. But strange things happen in the NFL, and I suppose I’m guessing something strange happens. Just don’t dig this up if I’m wrong.

• NJ.com staff: Three of five writers have picked the Seahawks. Here is some Eagles optimism from Joe Giglio:

It’s easy (and understandable) to bury the Eagles again after last week’s dismal offensive effort vs. the Patriots. But every almost offense seems to look incompetent vs. this Bill Belichick outfit. Doug Pederson’s team will fare much better vs. an overrated Seahawks team. A big reason why: The Eagles defense has made an under-the-radar turnaround.

The Seahawks are healthy and coming off a bye. The Eagles are neither healthy nor coming off a bye. The Seahawks have an MVP candidate at quarterback. The Eagles, though Carson Wentz remains legit, do not. Despite Seattle's advantages, this feels like a game it will lose. Part of the reason is the long road trip and an early Sunday afternoon kickoff time on the east coast. Also, Philadelphia still has a top-10 defense. The Eagles opened as two-point home favorites, so this is an upset that technically isn't an upset.

The Seahawks are coming off a bye, so the travel to the East Coast won't be an issue here. Russell Wilson has the receivers to attack the Eagles' secondary downfield, assuming Tyler Lockett will be OK to play to boost DK Metcalf and a more involved Josh Gordon. Seattle got its pass rush going with Jadeveon Clowney and is now better at covering the middle of the field. Philadelphia's compressed passing game won't do much to keep up, especially with the running game being contained.