Mailbag: Would Jay Gruden be a good fit as the Eagles' offensive coordinator in 2020? 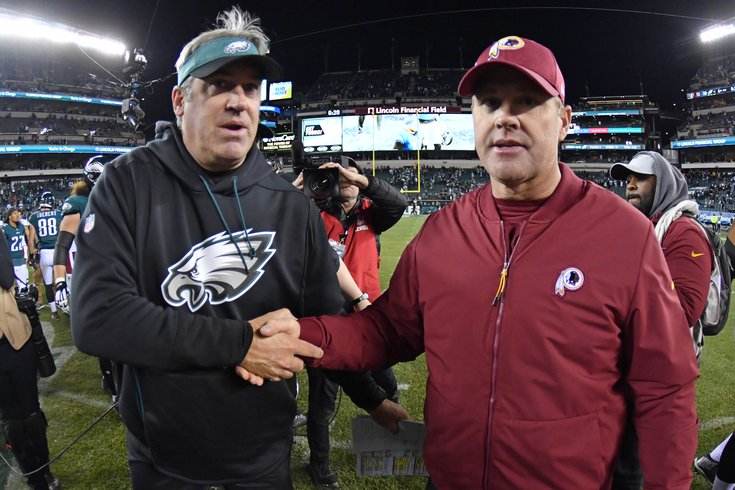 They're not even looking at each other. I don't see it.

Question from LostInChiTown: Any chance Jay Gruden wants an OC job? Working for Jeffrey Lurie would have to look incredibly attractive after Dan Snyder and that front office. In the least, I can't see him jumping into just any HC opportunity. Maybe he goes the Jim Schwartz route and settles in as a coordinator for a while?

I do wonder if he'll immediately get another head coaching opportunity. I guess that depends on how many teams fire their coaches. I would say that the four coaches in the most danger of losing their jobs would be Dan Quinn (Falcons), Pat Shurmur (Giants), Freddie Kitchens (Browns), and Zac Taylor (Bengals). I would include Adam Gase (Jets) in there, but it appears that he's not going anywhere. And then there are other coaches in danger, like Anthony Lynn (Chargers) and even Matt Nagy (Bears).

So if there are six or seven teams looking for a head coach, he could immediately land another job with one, as I believe most teams around the league will recognize the Washington team for the impossible situation that it is, and the job that Gruden did at times, making something out of nothing.

My sense is that it's a very low probability Gruden lands in Philly.

Oh, and of course this assumes that the Eagles will relieve Mike Groh of his offensive coordinator duties this offseason, which I do believe is a strong possibility, especially if the Eagles don't make the playoffs.

Question from Pragmatic: The Eagles' FG at the beginning of the game came because Wentz made a play outside of the structure of the play, he scrambled and threw a 50 yard pass which drew a penalty, when plays like that work everyone is excited, when he gets sacked or fumbles he needs to just "take what's there." You can't win, unless you win the game?

I made this video and posted it on Twitter just for this question:

My thoughts on the assertion that Carson Wentz "should take what the defense gives him." pic.twitter.com/rbADSDObdy

I believe the Eagles' best chance of an occasional big play is when Wentz is able to make something happen off schedule, because his receivers sure as hell aren't going to make big plays on their own. And if you want Wentz to dump it down all day, or throw the ball away at the first hint of pressure, then basically what you're asking him to be is Sam Bradford.

Is he going to take some sacks by extending plays or maybe leave some short gains on the field if he doesn't take a little dump-down? Of course. But at some point you need to have a few chunk plays. You can't have it both ways.

Question from greenwithenvy: Would DK Metcalf be the best receiver right now on the Eagles?

DeSean Jackson aside, is there even a debate?

Question from Hinkie: Jimmy, you are faced with a choice. You can add one and only one of the following for 2020. You are guaranteed the production. What order would you place them in in terms of preference?

1) An absolute shut down blanket corner

Nine times out of 10 I'd take the stud pass rusher, but on this team, it's hard not to go with the receiver after what we have seen this season.

Question from Patrick: I know it's coach speak but have you ever heard a coach praise his WR so much for running good routes or being physical or "doing nice things even though he didn't catch a ball." It's insulting to hear the same stuff week in and week out about this poor WR group.

I think that's "afraid for my job" speak.

Question from Bird Gang: Do you think Josh Sweat has shown enough to be DE3 next year, or at least get first crack at it?

Sweat's role in the defense became much more important when Malik Jackson went down. When Jackson was lost for the season, Brandon Graham often shifted inside, and Sweat became an edge rusher on high-leverage third down plays.

I've been meaning to get around to watching all of Sweat's snaps for like a month now, but haven't found the time. From what I have seen of him, he does flash on occasion, but you'd certainly like to see more consistent production.

I don't think the Eagles should think of him right this second as a definitive answer as the DE3 next season. Sweat already works pretty hard, but I still think you give him legitimate competition and make him continue to grow as a player. The athleticism is certainly there.

Am I nuts for being more encouraged at the signs of life we are finally seeing from the defense than discouraged by an offense missing two starting tackles (at one point) two starting WRs and their top RB?

You must be new here.

Question from bdbd20: What do you make of the Astros stealing signs thing? Not gonna lie, I do admire the hustle.

Should you really "admire the hustle," though? For those of you who don't know what the Astros were up to, here you go. Naughty language within:

I was watching Casino the other day, and the scene where the two blackjack cheats get caught reminded me of the Astros' tactics. Again, viewer discretion advised:

It's not exactly the most creative system. And the Astros were even banging on the dugout to signal their hitters? What morons. Of course they were going to get caught!